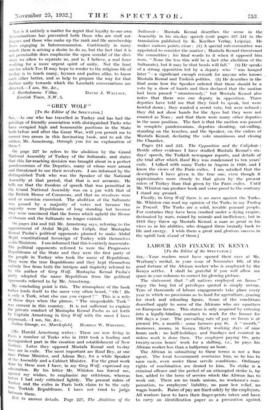 "GREY WOLF" [To the Editor of the SPECTATOR.] SIR,—As one

who has travelled in Turkey and has had the privilege of friendly association with distinguished Turks who have occupied high and honourable positions in the State both before and after the Great War, will you permit me to correct two errors in this fascinating book, and to ask the author, Mr. Armstrong, through you for an explanation of them? On page 227 he refers to the abolition by the Grand National Assembly of Turkey of the Sultanate, and states that this far-reaching decision was brought about in a perfect pandemonium of the Deputies, many of whom were armed and threatened to use their revolvers. I am informed by the distinguished Turk who was the Speaker of the National Assembly at that period, that that is not accurate. He tells me that the freedom of speech that was permitted in the Grand National Assembly was on a par with that of the British House of Commons, and that no revolvers were used or coercion exercised. The abolition of the Sultanate was passed by a majority of votes not because the majority were Republicans of long standing but because they were convinced that the forces which upheld the House of Osman and the Sultanate no longer existed.

On pages 244 and 245 Mr. Armstrong says, referring to the appointment of Abdul Mejid, the Caliph, that Mustapha Kemal Pasha's political opponents planned to make Abdul Mejid constitutional Sovereign of Turkey with themselves as his Ministers. I am informed that this is entirely inaccurate. The political opponents referred to were the Progressive Republicans of the State and they were the first party of the people in Turkey who took the name of Republican. They were the true Republicans and they kept themselves entirely free from both the intrigue and duplicity referred to by the author of Grey Wolf. Mustapha Kemal Pasha's party adopted the name Republican from the political opponents referred to by Mr. Armstrong.

My concluding point is this. The atmosphere of the book rather lends itself to the sneer very often heard, " Oh ! He is only a Turk, what else can you expect ! " This is a relic of those days when the phrase, " The unspeakable Turk" was current in this country. It is not sufficient to explain the private conduct of Mustapha Kemal Pasha as set forth by Captain Armstrong in Grey Wolf with the sneer I have expressed.—I am, Sir, &e., Sutton Grange, nr. Macclesfield. HAROLD W. WutsToN.

[Mr. Harold Armstrong writes : There are now living in Paris a number of Turks who in 1919 took a leading and distinguished part in the creation and establishment of New Turkey. Later they opposed Mustafa Kemal and to-day they are in exile. The most important are Raiff Bey, at one time Prime Minister, and Adnan Bey, for a while Speaker of the Assembly and a Cabinet Minister. For the great work done by these men I have, in my Grey Wolf, expressed my admiration. By his letter Mr. Whiston has forced me, against my wishes, to emphasize my criticisms, whereas before I had only criticized lightly. The present rulers of Turkey and the exiles in Paris both claim to be the only true Turkish Republicans. I have not tried to judge between them.

But to answer details. Page 227, The Abolition of the Sultanate: Mustafa Kemal describes the scene in the Assembly in his six-day speech (vide pages 537-541 in the translation published by K. Koelher Verlag, Leipzig). He makes various points clear : (1) A special sub-committee was appointed to consider the matter ; Mustafa Kemal threatened the committee ; his final words to it when it opposed him were, "None the less this will be a fact (the abolition of the Sultanate), but it may he that heads will fall." (2) He speaks of a strong opposition led by a deputy who " was hanged later "—a significant enough remark for anyone who knows Mustafa Kemal and Turkish politics. (3) He describes in the final scene how the Speaker ordered that there should be a vote by a show of hands and then declared that the motion had been passed "unanimously," but Mustafa Kemal also notes that there was one deputy in opposition. Three deputies have told me that they tried to speak, but were howled down ; they wanted a secret vote, but were refused ; they did not show hands for the Ayes but they were not counted as Noes ; and that there were many other deputies in the same position. The fact is that the motion was passed in complete pandemonium, deputies shouting, cat-calling, standing on the benches, and the Speaker, on the orders of Mustafa Kemal, declaring the vote unanimous and closing the Chamber.

Pages 244 and 245. The Opposition and the Caliphate : Beside other evidence I have studied Mustafa Kemal's six- days' speech, the Turkish newspaper reports, and details of the trial after which Rauf Bey was condemned to ten years' exile. I talked with many Turks in Angora in 1928, and I know the views of the Paris exiles. I am satisfied that the description I have given is the true one, even though it approximates more closely to that given by the present rulers of Turkey than that given by the Paris exiles. Until Mr. Whiston can produce book and verse proof to the contrary I stand my ground.

Finally, in Grey Wolf there is no sneer against the Turks. Mr. Whiston can read my opinion of the Turks in my Turkey in Travail. The Turks are a solid, lovable peasant people. For centuries they have been crushed under a dying empire, decimated by wars, ruined by misrule and inefficiency, but in 1919 they threw up Mustafa Kemal, a man as great in his vices as in his abilities, who dragged them brutally back to life and energy. I wish them a great and glorious success in the uphill task ahead of them.]