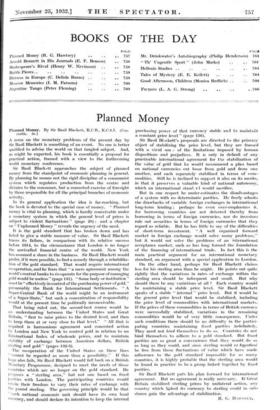 A BOOK on the monetary problems of the present day by Sir Basil Blackett is something of an event. No one is better qualified to advise the world on that tangled subject. And, as might be expected, his book is essentially a proposal for practical action, framed with a view to the forthcoming world monetary conference.

Sir Basil Black ett approaches the subject of planned money from the standpoint of economic planning in general. By planning he means not the rigid discipline of a communist system which regulates production from the centre and dictates to the consumer, but a concerted exercise of foresight by those responsible for all the principal branches of economic activity.

In its general application the idea is far-reaching, but the book is devoted to the special case of money. "Planned money is vital to planning, which is hardly conceivable under a monetary system in which the general level of prices is subject to Violent fluctuations" (page 20) : and a chapter on "Unplanned Money" reveals the urgency of the need.

It is the gold standard that has broken down and has failed to give a stable measure of value. Sir Basil Blackett traces its failure, in comparison with its relative success before 1914, to the circumstance that London is no longer the unrivalled financial centre of the world. New York has assumed a share in the business. Sir Basil Blackett would prefer, if it were possible, to find a remedy through a rehabilita- tion of the gold standard. That would require international Co-operation, and he fears that "a mere agreement among the world's Central banks to Jo-operate for the purpose of managing gold Would be useless" (page 131). "Some body or institution" must be" effectively in control of the purchasing power of gold," presumably the Bahk for International Settlements. "A Super-Central Bank of the world might be an instrument of a Super-State," but such a concentration of responsibility would at the present time be politically inconceivable.

That being ruled out,' the second-best course Would be an understanding between the ' United States and Great Britain, "first to raise prices to the desired level, and then to keep them at or very close to that leVel." "All that is required is harmonious agreement and concerted action by London and New York to control gold in relation to an International Index of wholesale prices, and to maintain stability of exchange between American dollars, British sterling and gold" (pages. 132-3).

The co-operation of the United States on these lines cannot be regarded as more than a possibility." If this hope also fails, Sir Basil Blackett would fall back on a British Monetary Programme, designed to meet the needs of those Countries which axe no longer on the gold standard. He Proposes a ." sterling area," but not one based on fixed Parities with London. The participating countries would retain their freedom to vary their rates of exchange with the pound sterling. The governing principle would be that each national economic Unit should have its own local Currency, and should declare its intention to keep the internal

purchasing power of that currency stable and to maintain a constant price level" (page 134.

• Sir Basil El tekett's proposals are directed to the primary object of stabilizing. the price level, but they are framed With a vivid sen c of the limitations imposed by human dispositions and prejudices. It is only in default of any practicable international agreement for the stabilization of the value of gold that he would recommend a plan based on national currencies cut loose from gold and from one another, and each separately stabilized in terms of com- modities. Still he is inclined to support it also on its merits, in that it preserves a valuable kind of national autonomy, which an international stand: r 1 would sacrifice.

But in one respect he under-estimates the disadvantages

of a system with no determinate parities. He freely admits the drawbacks of variable foreign exchanges in international long-term lending ; perhaps he even over-emphasizes it, for borrowing countries are not deterred thereby from borrowing in terms of foreign currencies, nor do investors rule out securities in terms of foreign currencies that they regard as reliable. But he has little to say of the difficulties of short-term investment. "A well organized forward market in foreign exchange would solve many problems," but it would not solve the problems of an international acceptance market, such as has long formed the foundation of the financing of international trade. In fact this is the main practical argument for an international monetary standard, an argument with a special application to London.

On the other hand, perhaps Sir Basil Blackett. claims less for his sterling area than he might. He points out quite rightly that the variations in rates of exchange within the sterling area 'should be infrequent and small. But why should there be any variations at all ? Each country would be maintaining a stable price level. Sir Basil Blackett speaks of a stable " internal " price level. But it would be the general price level that would be stabilized, including the price level of commodities with international markets. If the prices of these commodities in terms of British currency were successfully stabilized, variations in the remaining commodities would be of very little consequence. Under such conditions there should be no difficulty in the partici- pating countries maintaining fixed parities indefinitely. They need not bind themselves to do so.. Countries do not; bind themselves to adhere to a gold standard. But fixed parities are so great a convenience that they would do so as long as they could, and since sterling would ex hypothesi be free from those fluctuations of value which have made adherence to the gold standard impossible for so many countries, it is highly probable that the sterling area would be found in practice to be a group linked together by fixed parities.

Sir Basil Blackett puts his plan forward for international agreement. But no agreement is really necessary. If Great Britain stabilized sterling prices by unilateral action, any country which liaked its currency to sterling could in sub- stance gain the advantage of stabilization.