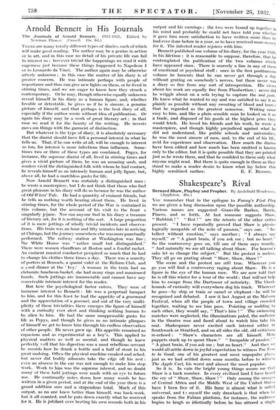 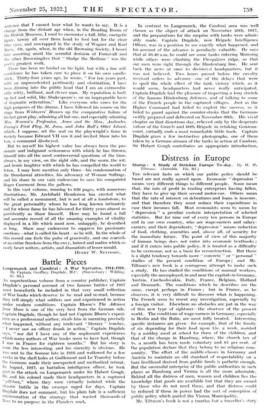 Bernard Shaw, Playboy and Prophet. By Archibald Henderson. (Appleton. 30s.) You remember that in the epilogue to Fanny's First Ploy we are given a long discussion upon the possible authorship. Various names are suggested—Granville Barker, Barrie, Pinero, and so forth. At last someone suggests Shaw. "Rubbish ! " " Rot ! " are the retorts of the other critics present. "I have repeatedly proved that Shaw is physio- logically incapable of the note of passion," says one. "In- tellect without emotion," says another ; "I always say myself," or "A giant brain, if you ask me ; but no heart." So the controversy goes on, till one of them says wearily, "And naturally we are all talking about Shaw. For heaven's sake let us change the subject." But the protest is useless. They all go on prating about "Shaw, Shaw, Shaw ! "

The scene and the protest are still true. Wherever you go you will find a controversy raging about Shaw. He is a figure in the eye of the human race. We are now told that he is off this winter for a tour of the world ; that will not help him to escape from the Dartmoor of notoriety. The blood- hounds of curiosity will everywhere dog his track. Wherever he goes—by ship or train or camel or elephant—he will he recognized and debated. I saw it last August at the Malvern Festival, when all the people of town and village crowded together, waiting to see him pass. Pointing or nodding to each other, they would say, "That's him ! " The swimming matches were neglected, the illuminations paled, the audience in the theatre rose and faced about to watch him take his seat. Shakespeare never excited such interest either in Southwark or Stratford, and on all sides the old, old criticisms re-echoed : "Shaw's characters are all himself. Mere puppets stuck up to spout Shaw." "Incapable of passion ! "A giant brain, if you ask me ; but no heart." And then we would all settle down in joyful expectation to witness Too True to be Good, one of his greatest and most unpopular plays, just as we had settled down some months before to witness The Apple Cart, his worst and almost the most popular. So it is. In vain the bright young things assure me that Shaw is a back number. In every civilized land I have heard the cry of "Shaw, Shaw, Shaw ! " Only among the savages of Central Africa and the Middle West of the United States have I been free of it. His fame is almost what is called universal, and t3 myself the only drawback is that when he speaks from the Fabian platform, for instance, the audience begins to laugh so idiotically before he has uttered a single sentence that -I cannot hear what he wants to say. It is a change from the distant age *hen, in the Reading Room of the British Museum, I used to encounter a tall, lithe, energetic figure, tawny all over from head to foot but for the clear blue eyes, and enwrapped in the study of Wagner and Karl Marx. Or, again, when, in the old Browning Society, I heard him asserting amid the scornful derision of Furnivall and the other Browningites that " Sludge the Medium ' was the poet's greatest work. There has been no bushel on his light, but with a fine self- . confidence he has taken care to place it on his own candle- stick. Thirty-four years ago, he wrote, " For ten years past, with an unprecedented pertinacity and obstination, I have been dinning into the public head. that I am an extraordin- arily witty, brilliant, and clever man. My reputation is built up fast and solid, like Shakespeare's, on an impregnable basis of dogmatic reiteration." Like everyone who cares for the high purposes of the drama, I have followed his course on the stage from Widowers' Houses up the comparative failure of his last great play, admiring all but one, and especially admiring Mrs. .11"arren's Profession, Arms and the Man, Androcles, Fanny's First Play, St. Joan, and John Bull's Other Island, whieh;._ I suppose, set the seal on the playwright's fame in Society because Edward VII saw it and invited Shaw into his box, a command disobeyed.

But to myself his highest value has always been the pas- sionate and indignant seriousness with which he has thrown, himself into all the most controversial questions of the time, always, in my view, on the right side, and the scorn, the wit, and ironic laughter with which he has compelled the world to listen. I may here mention only three—his condemnation of the Denshawai atrocities, his adVocacy Of Woman Suffrage, and his share in our vain endeavour to save his compatriot Boger Casement from the gallows.

In this vast volume, running to 850 pages, with numerous illustrations, Mr. Archibald Henderson has erected what will be called a monument, but is not at all a tombstone, to the great personality whom he has long known intimately and for whose fame he has laboured for thirty years almost as persistently as Shaw himself. Here may be found a full and accurate record of all the amazing examples of vitality displayed in a life which must now, unhappily, be described as long. Shaw may endeavour to suppress his passionate emotions—what is called his heart—As he will. In the whole of this record one feels the pulse of generosity, and one marvels at an entire freedom from the envy, hatred and malice which so easily beset writers, artists, and dramatists of lesser mould.