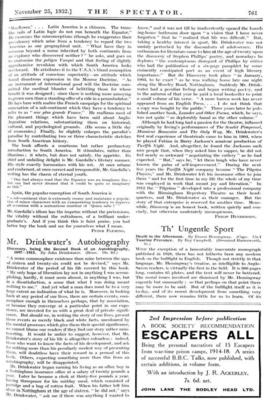 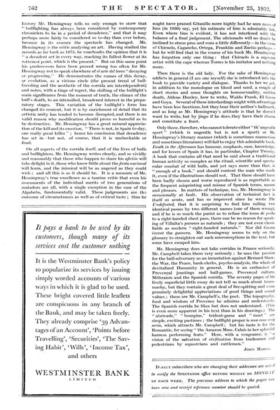 WITH the exception of a lamentably inaccurate monograph published in 1928, there has not hitherto been any modern book on the bullfight in English. Though not strictly in that language, Mr. Hemingway's treatise, as intelligible to Anglo- Saxon readers, is virtually the first in the field. It is 360 pages long, contains 6,1 plates, and the text will never be bettered. The moral issues involved are dismissed by Mr. Hemingway cogently but summarily ; so that perhaps on that point there may be more to be said. But of the bullfight itself as it is to-day, and of its recent development from something very- different, there now remains little for us to learn. Of its history Mr. Hemingway tells ...us only enough to show that " bullfighting, has always been considered by contemporary chroniclers to be-in- a period of decadence," and that it may perhaps more fairly be considered so to-day than ever before, because in its essence the spectacle has changed. Mr. Hemingway is the critic analysing an art. Having studied the records as far back as 1873, he vouchsafes the opinion that it is

a decadent art in every way, reaching its fullest flower at its rottenest point, which is the present." But on this same point his predecessors have been proved wrong too often for Mr. Hemingway not to speak elsewhere of el ark del toreo" decaying or progressing." He demonstrates the causes of this decay, g. evolution, as a vicious circle (the present trend of bull- breeding and the aesthetic of the corrida are interdependent) and notes, with a tinge of regret, the shifting of the bullfight's main significance from the moment of truth, the climax of the bull's death, to an intensified, broadened interest in the prepa- ratory stages. This variation of the bullfight's form has changed its content, but it is by enrichment of detail that its artistic unity has tended to become disrupted, and there is no valid reason why modification should prove so harmful as to be destructive. Mr. Hemingway has a great natural apprecia- tion of the kill and its emotion. "There is not, in Spain to-day, one really great killer"; hence his conclusion that decadence has set in—but not, of course, that it is uncheckable or final.

On all aspects of the corrida itself, and of the lives of bulls and bullfighters, Mr. Hemingway writes clearly, and so vividly and reasonably that those who happen to share his aficion will take delight in it, those who know little about the fiesta nacional will learn, and the inimical will be as angered as they could wish ; and all this is as it should be. It is a measure of Mr. Hemingway's true excellence as a taurine critic that even his assessments of the individual merits of two generations of matadors are all, with a single exception in the case of the Algabefio, fundamentally valid. These judgements are thn outcome of circumstances as well as of critical taste ; thus he

might have praised Gitanillo more highly had he seen more of him (in 1930) say, yet his _estimate of him is admirably fair. Even where bias is evident, it has not interfered with the balance of a final judgement:The aficionado will no doubt be inclined to stress pros and cons a little differently—in the cases of Chicuelo, Cagancho, Ortega, Franklin and Zurito perhaps— but he will find that in the course of his book Mr. Hemingway has forgotten only one thing : that Chicuelo is a supreme artist with the cape whereas Torres is his imitator and nothing more.

Then there is the old lady. For the sake of Hemingway addicts in general (I am one myself) she is introduced into the book to provide variety and dialogue. Thanks to her we get, in addition to the monologue on blood and sand, a couple of short stories and some thoughts on homosexuality, sudden death, Aldous Huxley, how to write, Waldo Frank, El Greco and Goya. Several of these interlardings might with advantage have been less facetious, but they bear their author's hallmark, and as long as Mr. Hemingway's attitude is that he doesn't want to write, but by jingo if he does, they have their charm and constitute a feast.

Only those, therefore, who cannot tolerate either" th' ungentle sport" (which is ungentle but is not a sport) or Mr. Hemingway's literary manner (which is sometimes mannerism and sometimes literature) will fail to enjoy this admirable book. Death in the Afternoon has humour, emphasis, ease, knowledge, and for lovers of Spain it has, in particular, Chapter Twenty. A book that contains all that need be said about a traditional human activity so complex as the ritual, scientific and specta- cular combat of wild bulls, and yet says more than that, is " enough of a book," and should content the man who made it, even if the illustrations should not. That these should have been badly chosen and worse reproduced is as regrettable as the frequent misprinting and misuse of Spanish terms, names and phrases. In matters of technique, too, Mr. Hemingway is occasionally at fault. His observation of technical fact is itself so acute, and has so improved since he wrote The Undefeated, that it is surprising to find him calling two identical passes by two different names (one of them wrong), and if he is so much the purist as to refuse the term de pecho to a right-handed chest pass, there can be no reason for speak- ing of Villalta'-s parones as naturals ; they are not even classi- fiable as modern "right-handed naturals." Nor did Gaona invent the gaonera. Mr. Hemingway seems to rely on the glossary to straighten out such misconceptions in the text, but some have escaped him.

Mr. Hemingway does not take corridas in France seriously. Mr. Campbell takes them very seriously ; he uses the passion for the bull-adversary as an incantation against Bernard Shaw, the War, the Peace, bank-clerks, psycho-analysis, the whole of devitalized Humanity in general. He is an enthusiast of Provençal joustings and bull-games, Provençal culture, Mithraism and the Spanish corrida. The seventy pages of his lively superficial little essay do not tell us much about tauro- machy, but they contain a great deal of fire-spitting and sonic genuinely delightful aprfreciations of good things and sound values ; these are Mr. Campbell's, the poet. The topography, food and wisdom of Provence he admires and understands. The Spanish corrida he likes but does not understand. (This is even more apparent in his text than in his drawings.) The " abrivade," " bourgine," trident-game and " razet " are simple, exciting pastimes ; the bullfight proper is una cosa muy sera, which attracts Mr. Campbell ; but his taste is for the Romantic, for seeing " the Amazon Mine. Calais in her splendid harness performing feats." Here, with a vengeance, is "a vision of the salvation of civilization from tradesmen and pedestrians by equestrians and cattlemen."