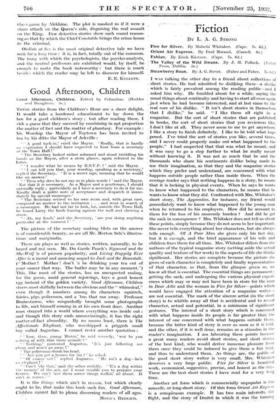 Good Afternoon, Children. Edited by Columbus. (Hodder and Stoughton. 5s.) TursE stories from the Children's Hour are a sheer delight. It would take a hardened educationist to lay down the law for a good children's story ; but after reading these, I risk a guess that they succeed by combining in apt proportion thematter of fact and the matter of phantasy. For example : his -Worship the Mayor of Toytown has .been invited to

tea by his ditto the Mayor of Arkville : - A good tuck-in,' cried. the Mayor. Really, that is hardly an expression I should have expected to hear from a secretary at the Town Hall ! '

"The Secretary looked rather ashamed and stood twiddling his hands as the Mayor, after a stern glance, again referred to the letter.

" I can tell you that, your worship, speaking as a secretary.' replied the Secretary. 'It is a secret sign, meaning that he would like an answer.'

Then why does he not say so in plain words ? 'said the Mayor. Not that it is necessary. As a Mayor and a gentleman, I should

naturally -reply ; particularly as I have a secretary to do it for me. Kindly draft a polite note of acceptance and despatch it imme- diately by special messenger.'

"The Secretary retired to his own room and, with great care, composed an answer to the invitation . . . and went in search of a messenger. He had not far- to -look, for, outside the Town Hall, he found Larry the lamb leaning against the wall and chewing a straw.

" ' Ah, my lamb,' said the Secretary, are you doing anything particular at the moment ?

The picture of the secretary making blots on the answer is of considerable beauty, as are all Mr. Morton Sale's illustra- tions and marginalia.

There are plays as well as stories, written, naturally, to be heard and not seen. Mr. Du Garde Peach's Sigmund and the She-Wolf is of proven popularity, and Living Happily Ever After is a moral Etna amusing sequel to Jack and the Beanstalk. (" Mother I Mother ! don't 'e be drinking your tea out of your saucer that way. The butler may be in any moment.") This, like most of the stories, has an unexpected ending, for the goose, amid general rejoicings, lays a good honest egg instead of the golden variety. Good Afternoon, Children steers most skilfully between the obvious and the" even though it numbers among its characters squirrels, fairies, pigs, policemen, and a 'bus that ran away. Professor Brailestawm, who misguidedly brought some photographs to life, met himself coming in at his own front door. Another man strayed into a world where everything was inside out : and though this story ends unconvincingly, it has the right matter-of-fact absurdity. By no means least, there is The Affectionate Elephant, who worshipped a priggish small boy called Augustus. I Cannot resist another quotation :

." 'Now, then, young Mister,' he said severely, wot be you a -doing of with that there animile ? ' Nothing,' protested Augustus. 'It's just following me about and won't go away ! '

Can't 'elp that,' said the other stolidly. "E's a dog within I e meanin' of the act, an' I must trouble you to perjuiee your licence. We can't 'ave them sorter things walkin' all about. It ain't in reason.' " It is the things which ain't in reason, but which clearly ought to be, that make this book such fun. Good Afternoon, Children cannot fail to please discerning readers of all ages. _