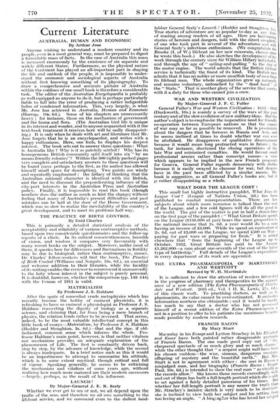 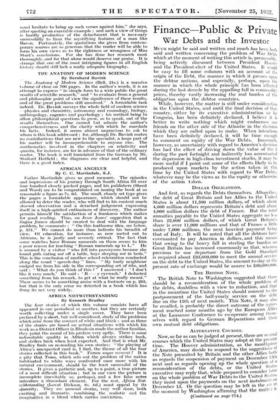 Macaulay in his Essays and Lytton Strachey in his Elizabeth and Essex have both painted rather disagreeable portraits of Francis Bacon. The one made good copy out of thr chequered spectacle of so much glory and so much shame. while the other thought that "a serpent might well have been his chosen emblem—the wise, sinuous, dangerous creature, offspring of mystery and the beautiful earth." But Nils' Sturt is not in agreement with either : she sees in Bacon a misjudged man, and her biography (Francis Bacon : Kegan Paul, 10s. 6d.) is intended to show the real man "as vividly as the records allow." She knows those records exceedingly well- and out of them has built a full-length portrait which she is able to set against a fairly detailed panorama of his times. But whether her full-length portrait is any nearer the truth than Mr. Strachey's incisive sketch is very much to be doubted: she is inclined to view both her subject and his setting fro!!! too loving an angle. "A biogtap1er who has loved her subject must hesitate to bring up such verses against him," she says, after quoting an execrable example ; and such a view of things is hardly productive of the detachment that is necessary successfully to limn the mystifying features of a man like Bacon. Fortunately, the quotations she gives from contem- porary sources are so generous that the reader will be able to form his own views as to the rightness or wrongness of Miss Sturt's conclusions. For she has done her research most thoroughly, and for that alone would deserve our praise. If is strange that one of the most intriguing figures in all English history should still lack a really adequate biography.