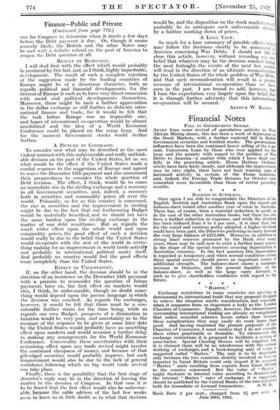 A PICTURE IN CONTRASTS.

To consider now what may be described as the most violent contrast with this unfavourable and really unthink- able decision on the part of the United States, let us see what would be the effect if the United States made a cordial response to the suggestion of Europe and agreed to waive the December 15th payment and also announced their preparedness to consider the whole question of Debt revision. The effect, I think, would be to cause an immediate rise in the sterling exchange and a recovery in all Government securities, and, indeed, a recovery both in securities and commodity prices all over the world. Primarily, so far as this country is concerned, the rise in securities and the improvement in sterling might be due to the fact that our forthcoming Budget would be materially benefited, and we should not have the same burden upon the sterling exchange in the matter of our debt remittance. But as regards the much wider effect upon the whole world and upon commodity prices, the good effect of such a decision would really be due to the belief that the United States would co-operate with the rest of the world in eVery- thing making for an improvement in world trade activit7 and probably in international political amity itself. And probably no country would feel the good effects more completely than the United States.