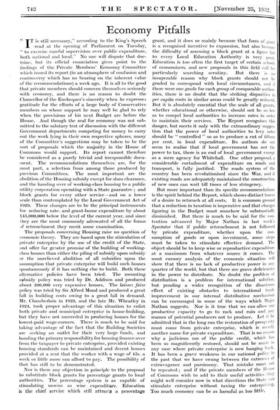 TT is still necessary," according to the King's Speech I read at the opening of Parliament on Tuesday, " to exercise careful supervision over public expenditure, both national and local." No one will dispute that doc- trine, but its official enunciation gives point to the findings of the Private Members' Economy Committee which issued its report (in an atmosphere of confusion and controversy which has no bearing on the inherent value of the recommendations) a week ago. It is all to the good that private members should concern themselves seriously with economy, and there is no reason to doubt the Chancellor of the Exchequer's sincerity when he expresses gratitude for the efforts of a large body of Conservative members on whose support he may well be glad to rely when the provisions of his next Budget are before the House. And though the zeal for economy was not sub- mitted to the salutary test of discussion with the different Government departments competing for money to carry out the work lying in their own respective spheres, many of the Committee's suggestions may be taken to be the sort of proposals which the majority in the House of Commons would support. Its report cannot therefore be considered as a purely trivial and irresponsible docu- ment. The recommendations themselves are, for the most part, a selection from among those produced by previous Committees. The most important are the abolition of the Housing subsidy except for slum clearance, and the handing over of working-class housing to a public utility corporation operating with a State guarantee ; and block grants for every other service—and on a lower scale than contemplated by the Local Government Act of 1929. These changes are to be the principal instruments for reducing rate- and grant-borne expenditure by about t45,000,000 below the level of the current year, and since they are the most commonly advocated of all the forms of retrenchment they merit some examination.

The proposals concerning Housing raise no question of economic theory. They are based upon the stimulation of private enterprise by the use of the credit of the State, and offer far greater promise of the building of working- class houses than either the piling of subsidy upon subsidy or the unrelieved abolition of all subsidies upon the assumption that private enterprise will build such houses spontaneously if it has nothing else to build. Both these alternative policies have been tried. The mounting subsidy policy was tried by Dr. Addison and produced about 200,000 very expensive houses. The laissez faire policy was tried by Sir Alfred Mond and produced a great fall in building costs owing to a great fall in demand. Mr. Chamberlain in 1923, and the late Mr. Wheatley in 1924, took proper advantage of this situation to enlist both private and municipal enterprise in house-building, but they have not succeeded in producing houses for the lowest-paid wage-earners. There is much to be said for taking advantage of the fact that the Building Societies are seeking an outlet for their very large funds, and handing the primary responsibility for housing finance over from the taxpayer to private enterprise, provided existing housing standards can be maintained and decent houses provided at a rent that the worker with a wage of 45s. a week or little more can afford to pay. The possibility of that has still to be demonstrated.

Nor is there any objection in principle to the proposal to substitute block grants for percentage grants to local authorities. The percentage system is as capable of stimulating unwise as wise expenditure. Education is the chief service which still attract!) a percentage grant, and it does so mainly because that form of grant is a recognised incentive to expansion, but also became the difficulty of assessing a block grant at a figure fair to every Local Education Authority is very great. Education is too often the first target of certain schools of economisers, and new proposals in this field call for particularly searching scrutiny. But there is no insuperable reason why block grants should not be graded to correspond with local circumstances, and II there were one grade for each group of comparable author- ities, there is no doubt that the striking disparities ill per capita costs in similar areas could be greatly reduced. But it is absolutely essential that the scale of all grant,. whether educational or otherwise, should not be so low as to compel local authorities to increase rates in order to maintain their services. The Report recognises this danger, but meets it only with the extraordinary sugges- tion that the power of local authorities to levy rates should be " controlled " so as to produce a cut of fifteen per cent. in local expenditure. Its authors do not seem to realise that if local government has not the power to tax, there is an end of local government except as a mere agency for Whitehall. One other proposal, a considerable curtailment of expenditure on roads and transport, is fully justified. The roads system of the country has been revolutionised since the War, and if existing roads are adequately maintained the construction of new ones can wait till times of less stringency.

But more important than its specific recommendations is the spirit behind the Report, which shows distinct traces of a desire to retrench at all costs. It is common ground that a reduction in taxation is imperative and that charges figuring in the Budget must somehow be substantially diminished. But there is much to be said for the con- tention advanced by Major Nathan in last week's Spectator that if public retrenchment is not followed by private expenditure, whether upon the con- sumption of goods or upon investment, some steps 'must be taken to stimulate effective demand. The object should be to keep wise or reproductive expenditure at a maximum from whatever source it comes. The most cursory analysis of the economic situation will show that there is no lack of productive power in ally quarter of the world, but that there are grave deficieneie, in the power to distribute. No doubt the problem 01 distribution is a problem for international solution. but pending a wider recognition of the disastron, effect of existing obstacles to international trade improvement in our internal distributive mechanismi • can be encouraged in some of the ways which Major Nathan suggests. Nor is it true that we can allow our productive capacity to go to rack and ruin and pay masses of potential producers not to produce. Let it bc admitted that in the long run the restoration of prosperity must come from private enterprise, which is merely another name for private expenditure. That is no reason -why a judicious use of the public credit, which has been so magnificently restored, should not be made in any case where private enterprise is now hanging back. It has been a grave weakness in our national policy in the past that we have swung between the extremes oL extravagance and parsimony. That mistake must not be repeated ; and if the private members of the House of Commons wish to add to their useful activities they might well consider now in what directions the State call stimulate enterprise without taxing the enterprising. Too much economy can be as harmful as too little.