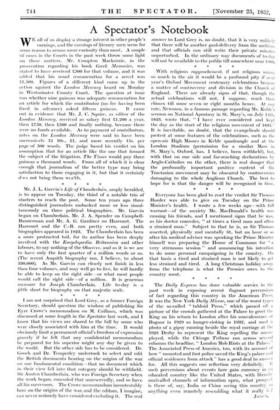 Page 6, 25 November 1932 — With religious rapprochement, if not religious union, so much in
Close

With religious rapprochement, if not religious union, so much in

the air it would be a profound pity if next year's Oxford Movement centenary celebrations became a matter of controversy and division in the Church of England. There are already signs of that, though the actual celebrations will not, I suppose, reach their climax till some seven or eight months hence: At any rate, Newman, in a famous passage regarding Mr. Keble's sermon on National Apostasy in St. Mary's, on July 14th, 1833, wrote that, "I have ever considered and kept the day as the start of the religious movethent of 1833:7 It is inevitable, no doubt, that the evangelicals should protest at some features of the celebrations, such as the open-air . High Masses in, Keble quadrangle and at the London Stadium (permission for a similar Mass in St. Mary's, Oxford, has, I believe, been withheld), but, with that on one side and far-reaching declarations by Anglo-Catholics on the other, there is real danger that the profoundly important positive content . of . the Tractarian movement may be obscured by. controversies damaging to the whole Anglican Church. The best to hope for is that the danger will be recognised in time.