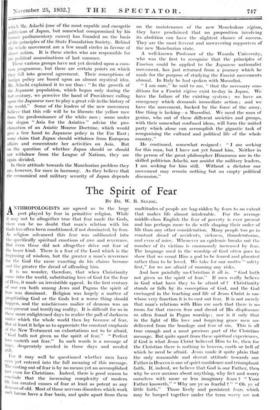 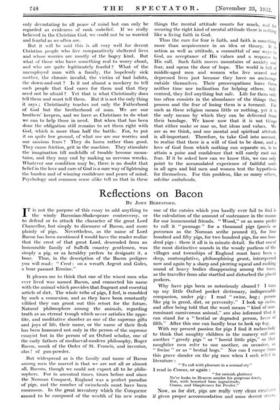 The Spirit of Fear

ANTHROPOLOGISTS are agreed as to the large. part played by fear in primitive religion. While it may not be altogether true that fear made the Gods, there can be no doubt that man's relation with his Gods has often been conditioned, if not dominated, by fear. As religion -advanced this fear was sublimated into the specifically spiritual emotions of awe and reverence. But even these did not altogether drive out fear of the baser kind. There is a fear of the Lord which is the beginning of wisdom, but the greater a man's reverence for the God the More exacting do his claims become and the greater the dread of offending him.

It is no • wonder, therefore, that when Christianity eame into the world, substituting loVe of God for the fear of Him, it made an irresistible appeal. In the first century of our era both among Jews and Pagans the spirit of fear was dominant. Religion was largely a matter of propitiating God or the Gods lest a worse thing should happen, and the mischievous malice of demons was an ever-present-and terrifying reality. It is difficult for us in these more enlightened days to realise the pall of darkness under which the whole world then lay because of fear. But at least it helps us to appreciate the constant emphasis of the New Testament on exhortations not to be afraid. 'God hath not given us the spirit of fear." "Perfect love casteth out fear." In such words is a message of hope, desperately needed in those days and needed still.

For it may well be questioned whether men have even yet entered into the full meaning of this message. The casting out of fear is by no means yet an accomplished fact even for Christians. Indeed, there is good reason to conclude that the increasing complexity of modern life has created causes of fear at least as potent as any demons of old. Most of those nervous disorders which work such havoc have a fear basis, and quite apart from them multitudes of people are hag-ridden by fears to an extent that makes life almost intolerable. For the average middle-class English the fear of poverty is ever present and has perhaps more to do with shaping their order of life than any other consideration. Many people too go in constant dread of accidents, sickness, thunderstorms, and even of mice. Whenever an epidemic breaks out the number of its victims is enormously increased by fear. The language used in the worship of God often goes to show that we count Him a god to be feared and placated rather than to be loved. We take for our motto "safety first," for we are afraid of running any risks.

And how painfully un-Christian it all is. " God !lath not given us the spirit of fear." If men really believe in God what have they to be afraid of ? Christianity stands or falls by its conception of God, and the God envisaged in the teaching and life of Jesus Christ is one whose very function it is to cast out fear. It is not merely that man's relations with Him are such that there is no room for that craven fear and dread of His displeasure so often found in Pagan worship ; nor is it only that in the light of His love and forgiving grace men are delivered from the bondage and fear of sin. This is all true enough and a most precious part of the Christian message. But quite apart from these spiritual experiences, if God is what Jesus Christ believed Him to be, then for the Christian there is nothing in heaven, earth or hell of which he need be afraid. Jesus made it quite plain that the only reasonable and decent attitude towards our Father in Heaven is one of quiet confidence and triumphant faith. If, indeed, we believe that God is our Father, then why be over anxious about anything, why fret and worry ourselves with more or less imaginary fears ? "Your Father knoweth," "Why are ye so fearful ? " "Oh ye of little faith." Those lively and persistent fears which may be lumped together under the term worry are not only devastating to all peace of mind but can only be regarded as evidences of rank unbelief. If we really believed in the Christian God, we could not be so worried and fearful as we often are.

But it will be said this is all very well for decent Christian people who live comparatively sheltered lives and whose worries are mostly of the bogey kind. But what of those who have something real to worry about, and who are quite legitimately fearful ? What of the unemployed man with a family, the hopelessly sick mother, the chronic invalid, the victim of bad habits, the down-and-out ? Is it not almost a mockery to tell such people that God cares for them and that they need not be afraid ? Yet that is what Christianity does tell them and must tell them. But it is not the only thing it says ; Christianity teaches not only the Fatherhood of God but the brotherhood of man. We are our brothers' keepers, and we have as Christians to do what we can to help those in need. But when that has been done the obligation still remains to set them right with God, which is more than half the battle. For, to put it on quite low ground, of what use are our worries and our anxious fears ? They do harm rather than good. They cause friction, grit in the machine. They stimulate the imagination till molehills of trouble become moun- tains, and they may end by making us nervous wrecks. Whatever our condition may be, there is no doubt that belief in the love and care of God is a sure way of lightening the burden and of winning confidence and peace of mind. Psychology and common sense alike tell us that in these things the mental attitude counts for much, and for securing the right kind of mental attitude there is nothing like a living faith in God.

Thus the cure for fear is faith, and faith is something more than acquiescence in an idea or theory. It is action as well as attitude, a committal of our ways to God, an acceptance of His values and a response to His call. Such faith moves mountains of anxiety and fear, and opens the door of hope. The world is full of middle-aged men and. women who live scared and depressed lives just because they have no anchorage outside themselves. Their preoccupations leave them neither time nor inclination for helping others. Self- centred, they feel anything but safe. Life for them only too often consists in the abundance of the things they possess and the fear of losing them is a torment. For such as these religion means little or nothing, yet it is the only means by which they can be delivered from their bondage. We know now that it is not things that either make or mar us, but ideas and values. We are as we think, and our mental and spiritual attitude is all-important. Therefore, to take God into account, to realize that there is a will of God to be done, and a love of God from which nothing can separate us, is to attain a poise and confidence that will surely cast out fear. If it be asked how can we know this, we can only point to the accumulated experience of faithful souls in all ages and bid men and women test the hypothesis for themselves. For this problem, like so many others, solvitur ambulando.