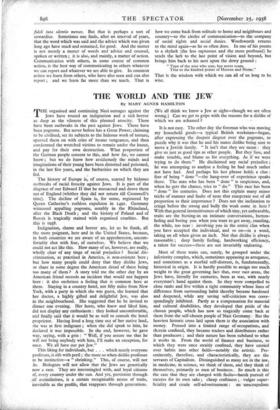 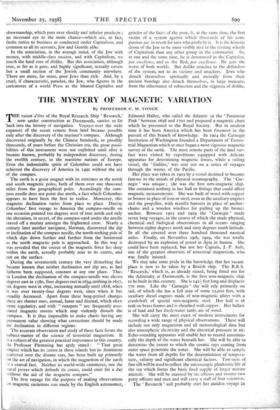 THE WORLD AND THE JEW .

THE organised and continuing Nazi outrages against the Jews have roused an indignation and a sick horror as deep as the vileness of this planned atrocity. There have been outbreaks in the past against Jews. There have been pogroms. But never before has a Great Power, claiming to be civilised, set its subjects to the hideous work of torture, spurred them on with cries of insane vengeance, and then condemned the wretched victims to remain under the knout, and pay for their own destruction. What proportion of the German people consent to this, and how far, we cannot know ; but we do know how assiduously the minds and imaginations of their young have been .distorted and poisoned, in the last five years, and the barbarities on which they are fed. r., The history of Europe is, of course, scarred by hideous outbreaks of racial ferocity against Jews. It is part of the disgrace of our Edward II that he massacred and drove them out of England (whither they did not return till Cromwell's time). The decline of Spain is, for some, registered by Queen Catherine's ruthless expulsion in 1492. Germany witnessed appalling pogroms, notably in the Rhineland, after the Black Death ; and the history of Poland and of Russia is . tragically stained with organised cruelties. But this is 1938.

Indignation, shame and horror are, let us be frank,. all the more poignant, here and in the United States, because, in both countries we are aware of an. apprehension, uncom- fortably shot with fear, of ourselves.. We believe that we could not act like this. How many of us, however, are really, wholly clear of any tinge of racial prejudice ? Social dis-. crimination, as practised in America, is non-existent here ; but , how many people could deny that they dislike Jews, or share in some degree the American dread of there being too many of them A story told me the other day by an American friend records an incident that would not happen. here : it also enshrines a feeling that is common here as there. Staying in a country hotel, not fifty miles from New York, with a party in which she was guest, she learned that her doctor, a highly gifted and delightful Jew, was also . in the neighbourhood. She suggested that he be invited to dinner one evening. Her hosts, who knew and liked him, did not display any enthusiasm : they looked uncomfortable, and finally said that it would be as well to consult the hotel proprietor. Having lived a long time out of her native land, she was at first indignant ; when she did speak to him, he declared it was impossible. In the end, however, he gave way, saying, with a grin : " Well, if you assure me that he will not bring anybody with him, I'll make an exception, for once. We all have our pet Jew."

This liking for individuals, but . . . which nearly everyone professes, is rife with peril ; the more so when dislike professes to be instinctive—a " shrinking " This, of course, will not do. Biologists will not allow that the Jews are genetically now a race. They are intermingled with, and loyal citizens of, every country under the sun. And yet, persistent through :all assimilations, is a certain recognisable nexus of traits, inevitable as the profile, that reappears through generations. (We all think we know a Jew at sight—though we are often wrong.) Can we get to grips with the reasons for a dislike of which we are ashamed ?

It is not easy. The other day the foreman who.was moving my household goods—a typical British worknian—began, after 'expressing the deepest disgust over the pogroms, to puzzle why it was that he and his mates dislike being sent to move a Jewish family. " It isn't that they are mean they give us just as good tips as other people. But they fuss, and make trouble, and blame us for everything. As if we were trying to do them." He diSclaimed any rade. prejudice ; he was attempting to analyse a feeling he had much rather not have had. And perhaps his last phrase holds a clue : fear of being " done "—the hang-over of experienCe speaks there. The man who his been " done " is suspicious, and, when he gets the chance, tries to" do." This race has been " done " for centuries. Does not this explain manY minor tricks of manner and faults of taste that exasperate out of all proportion to their importance ? Does not the inclination to cringe 'before the strong and bully the weak come, in here ? With that general insensitiveness of whichtiny, yet unbearable, traits are the butting-in on intimate conversations, button- holing and boring you when yOu want to get away., standing, the while, too near : _involving you in the entire clan when you have accepted the individual, and so on—in a word, taking an ell when given an inch. Not that dislike is always. reasonable ; deep family feeling, hardworking efficiency, a talent for success—these are not invariably endatring.

Most of these traits can, surely, be grouped under the inferiority complex, which, sometimes appearing as. arrogance, and sometimes as a morbid self-distrust, is, fundamentally, historical in origin. It is hardly possible to assign too much weight to the great governing fact that, over vast areas, the Jews have, literally for centuries, been at war, with nearly everyman's hand against them So they were compelled to close ranks and live within a tight community whose lines of difference from surrounding habit thereby became hardened and deepened, while any saving self-criticism was corre- spondingly inhibited. Partly as a compensation for material and cultural disabilities, they developed that pride of . the chosen people, which has now so tragically come: back at them from the self-chosen people of Nazi Germany: But the heaviest historic cross- laid upon them is the association with money. Pressed into a limited range of occupations, and therein confined, they became traders and distributors rather than* producers ; and their nature has been- subdued to what it works in. From the world of finance and business, to which they were once straitly confined; they have carried over habits into other fields,--notably the artistic. Pre- eminently, therefore, -and characteristically, they are the servants of Capitalism. Distinguished as many are in the law, in medicine, in science, we think of them,. and they think of themselves, primarily as men of business., So' much is this the case that they are charged with faults—harsh. pursuit of success for its own sake ; cheap craftiness ; vulgar super- ficiality and crude . self-advertisement : an unscrupulous showmanship, which puts over 'shoddy and inferior products ; an incessant eye to the main chance—which are, in fact, faults native to business as conducted under Capitalism, and common to all its servants, Jew and Gentile alike.

In the association, in the average mind, of the Jew with money, with middle-class success, and with Capitalism, we touch the hard core of dislike. But this association, although true, as far as it goes, and highly significant, actually covers but a small section of the Jewish community anywhere. There are more, far more, poor Jews than rich. And, by a cruel, if characteristic, paradox, the Jew, who figures in the caricatures of a world Press as the bloated Capitalist and grinder of the faces of the poor, is, at the same time, the first victim of a system against which thousands of his com- patriots are in revolt for tens who profit by it. It is the historic doom of the Jew to be more visibly tied to the turning wheels of Capitalism than any other group in the community. So, at one and the same time, he is denounced as the Capitalist, par excellence, and as the Red, par excellence. He gets the worst of both worlds. But dislike attaches to the defenders of the system, not to its victims and attackers. Jews who detach themselves spiritually and mentally from their ancient bondage also detach themselves, in large measure, from the inheritance of subjection and the stigmata of dislike.