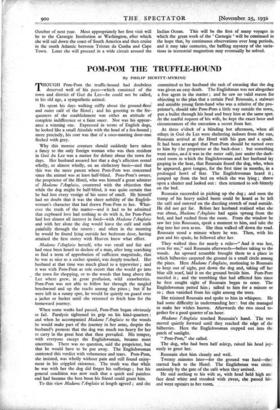 THOUGH Porn-Porn the truffle-hound had doubtless deserved well of his pays—which consisted of the town and district of Gue du Lez—he could not be called, in his old age, a sympathetic animal.

He spent his days walking stiffly about the ground-floor and outer café of the Hotel ; and his greeting to the fre- quenters of the establishment was either an attitude of complete indifference or a faint sneer. Nor was his appear- ance a winning one. Expressed in terms of English dogs, he looked like a small Airedale with the head of a fox-hound ; more precisely, his coat was that of a coco-matting door-mat flecked with grey.

Why this morose creature should suddenly have taken a fancy to the only foreign woman who was then resident in Gue du Lez was a matter for debate about the town for days. Her husband assured her that a dog's affection rested wholly, or almost wholly, on an olefactory basis—and that this was the more patent where Porn-Porn was concerned since the animal was at least half-blind. Porn-Porn's owner, the proprietor of the Hotel, who was himself a great admirer of Madame l'Anglaise, countered with the objection that while the dog might be half-blind, it was quite certain that he had lost every vestige of his sense of smell. He himself had no doubt that it was the sheer nobility of the English- woman's character that had drawn Porn-Porn to her. What- ever the truth of the matter—and it had to be admitted that cupboard love had nothing to do with it, for Porn-Porn had lost almost all interest in food—with Madame l'Anglaise and with her alone the dog would leave the café and stalk painfully through the streets : and often in the morning he would be found lying outside her bedroom door, having attained the first storey with Heaven knew what effort.

Madame l'Anglaise herself; who was small and fair and had once been heard to declare of a man, after long searching to find a term of approbation of sufficient magnitude, that he was as nice as a cocker spaniel, was deeply touched. Her husband at that time was much glued to a typewriter ; and it was with Porn-Porn as sole escort that she would go into the town for shopping, or to the woods that hang above the Lez where grew, in great profusion, wild strawberries. Porn-Porn was not able to follow her through the tangled brushwood and up the tracks among the pines ; but if he were left in a sunny spot, he would lie quietly on guard over a jacket or basket until she returned to fetch him for the homeward journey.

When some weeks had passed, Porn-Porn began obviously to fail. Paralysis tightened its grip on his hind-quarters : and when he accompanied Madame l'Anglaise to the woods he would make part of the journey in her arms, despite the husband's protests that the dog was much too heavy for her to carry in the great heat that then prevailed. His temper, with everyone except the Englishwoman, became most uncertain. There was no question, said the proprietor, but that he would have to be put away. The Englishwoman contested this verdict with vehemence and tears. Porn-Porn, she insisted, was wholly without pain and still found enjoy- ment in his crippled existence. The truth was that while he was with her the dog did forget his sufferings ; but his general condition was now such that a quick and painless end had become the best boon his friend could grant him.

To this view Madame l'Anglaise at length agreed ; and she committed to her husband the task of ensuring that the dog was given an easy death. The Englishman was not altogether a free agent in the matter ; and he saw no valid reason for objecting to the plan that a certain Paul Roussain, a stalwart and amiable young farm-hand who was a relative of the pro- prietor's, should take Porn-Porn a little way outside the town, put a bullet through his head and bury him at the same spot. At the tearful request of his wife, he kept the exact hour and circumstances of the execution a secret from her.

At three o'clock of a blinding hot afternoon, when all others in Gue du Lez were sheltering indoors from the sun, Roussain arrived at the Hotel with his gun and a spade. It had been arranged that Porn-Porn should be turned over to him by the proprietor at the back-door but something went amiss, an d it was in the outer café, just under the dark- ened room in which the Englishwoman and her husband lay gasping in the heat, that Roussain found the dog, who, when he appeared, gave tongue, for the first time in months, in a prolonged howl of fear. The Englishwoman heard it ; jumped up from the bed on which she was lying ; threw open a shutter and looked out : then returned to sob bitterly on the bed.

Roussain succeeded in picking up the dog ; and soon the tramp of his heavy nailed boots could be heard as he left the cafe and entered on the dazzling stretch of road outside. He did not get far. Before her husband realised what she was about, Madame l'Anglaise had again sprung from the bed, and had rushed from the room. From the window he saw her join Roussain, speak a moment to him, and take the dog into her own arms. She then walked off down the road. Roussain stood a minute where he was. Then, with his gun and his spade, he followed after her.

They walked thus for nearly a mile—" And it was hot, even for me," said Roussain afterwards—before taking to the woods. An upward scramble brought them to a place in which bilberries carpeted the ground in a small circle among the pines. Here Madame l'Anglaise, motioning to Roussain to keep out of sight, put down the dog and, taking off her blue silk scarf, laid it on the ground beside him. Porn-Porn nuzzled it ; and the trembling that had afflicted him since he first caught sight of Roussain began to cease. The Englishwoman patted him ; talked to him for a minute or so ; then vanished from his sight among the trees.

She rejoined Roussain and spoke to him in whispers. He had some difficulty in understanding her : but she managed to make her wishes known. Afterwards the two stood to- gether for a good quarter of an hour.

Madame l'Anglaise touched Roussain's hand. The two moved quietly forward until they reached the edge of the bilberries. Here the Englishwoman stepped out into the patch of sunlight.

The dog, who had been half asleep, raised his head joy- ously to greet her.

Roussain shot him cleanly and well.

Twenty minutes later—for the ground was hard—they started back to the Hotel. The Englishman was sitting anxiously by the gate of the café when they arrived.

He said nothing to his wife as, with head held high an( face dead white and streaked with sweat, she passed hin. and went upstairs to her room.