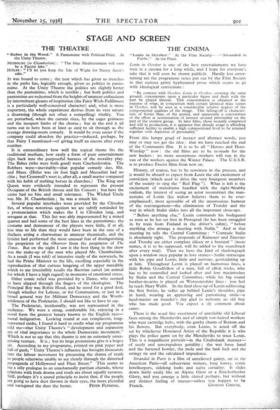 Lenin in October is one of the best entertainments we have seen in a cinema for a long while, and I hope for everyone's sake that it will soon be shown publicly. Hardly less enter- taining are the programme notes put out by the Film Society in that curious gritty hyphenated prose which seems to go with ideological convictions :

" By contrast with October, Lenin in October, covering the same ground, concentrates upon a particular figure and deals with the part he played therein. This concentration is obtained at the expense of what, in comparison with certain identical mass scenes in October, will be seen as a considerable relative neglect of the compositional qualities of the image. This falling-off is character- istic of Soviet films of the period, and apparently a concomitant of the effort at reorientation of interest around personality on the part of the creative group. In later films, those recently completed and still in production, it is apparent that already usage is affording sufficient facility to enable a high compositional level to be retained together with depiction of personality."

From this lumpy gruel of inexact and abstract words, you may or may not get the idea : that we have reached the end of the Communist film. It is to be all " Heroes and Hero- Worship " now : the old films are to be re-made for the new leaders : no more anonymous mothers will run in the van of the workers against the Winter Palace. The U.S.S.R.

is to produce Fascist films from now on.

History, of course, has to be rewritten in the process, and it would be absurd to expect fromrLenin the old excitement of conviction (which used to drive the very bourgeois members of the society to sing the " Red Flag "). What is left is the excitement of melodrama handled with the right *shabby realism, the interest of seeing an actor reconstruct the man- nerisms of Lenin (his widow believes them to be over- emphasised), most agreeable of all the unconscious humour of the rearrangement—the elimination of Trotsky and the way in which Stalin slides into all the important close-ups.

" Before anything else," Lenin commands his bodyguard as soon as he has set foot in Petrograd (he has been smuggled in by train from Finland in the driver's cabin), " before anything else arrange a meeting with Stalin." And at that meeting he tells the Central Committee : " Comrade Stalin is absolutely right. The proposals of Kamenev and Zinoviev and Trotsky are either complete idiocy or a betrayal " (more names, it is to be supposed, will be added to the soundtrack after every trial). Then we have the kind of shadowgraph upon a window once popular in love stories—Stalin statuesque with his pipe and Lenin, little and nervous, gesticulating up at him. Throughout Lenin is played on humorous lines, a little Robin Goodfellow of a man, full of elfish tricks, who has to be controlled and looked after and lent macintoshes by Stalin and the Central Committee, while his big sound brother-in-arms is played on Worcestershire lines : you feel he reads Mary Webb. In the final close-up of Lenin addressing the first Soviet, he sidles up behind Lenin's shoulder, pipe in hand, wearing an approving and patronising smile—a head-master on founder's day glad to welcome an old boy who has made good. You expect a sly comment about canes.

There is the usual fine assortment of unreliable old Liberal. faces among the Mensheviks and of simple tow-haired workers who wear cartridge belts, with the gawky charm of Bottom and his flowers. But everybody, even Lenin, is acted off the set by whichever Honoured Artist of the Republic it is who plays the police agent set by the Mensheviks to trace Lenin. This is a magnificent portrait—in the Cruikshank manner

of seedy and unscrupulous gentility ; the wet loose hand and the battered bowler, the mole and the .lank lock and the stringy tie and the calculated impudence.

Stranded in Paris is a film of unrelieved gaiety, set in the American Paris—all subservient waiters, long loaves, comic

hotelkeepers, sidelong looks and naïve carnality. It slides down fairly easily like an Alpine Glow or a Knickerbocker Glory, and you emerge a little cloyed perhaps, but without any distinct - feeling of nausea—unless you happen to be