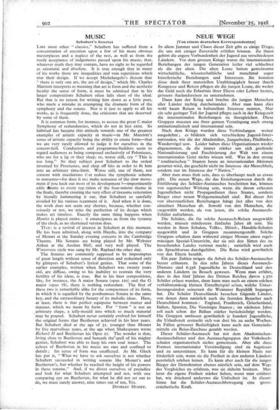 LIKE most other " classics," Schubert has suffered from a concentration of attention upon a few of his more obvious masterpieces and a neglect of the rest, as well as from the ready acceptance of judgements passed upon his music, that, whatever truth they may contain, have no right to be regarded as axiomatic and absolute. It is true enough that in many .of his works there are inequalities and vain repetitions which mar their design. If we accept Michelangelo's dictum that ," there is only one art, the art\ of design," which Mr. Charles Marriott interprets as meaning that art is form and the aesthetic faculty the sense of form, it must be admitted that in his larger compositions Schubert often falls short of the ideal. But that is no reason for writing him down as a lyric poet, who made a mistake in attempting the dramatic form of the symphony and the sonata. Nor is it just to apply to all his works, as is frequently done, the criticisms that are deserved by some of them.

It is common form, for instance, to accuse the great C major Symphony of redundancies, which do not in fact exist. So habitual has become this attitude towards one of the greatest examples of artistic capacity in music—in Mr. Marriott's sense of artistic capacity being the ability to create form—that we are very rarely allowed to judge it for ourselves in the concert-hall. Conductors and programme-builders seem to regard audiences as being composed exclusively of Poloniuses, who are for a jig or they sleep, or, worse still, cry "This is too long." So they subject poor Schubert to the ordeal invented by Procrustes, and chop off bits in order to fit him into an arbitrary time-limit. Worse still, one of them, not content with mutilations -that reduce the symphonic scheme to nonsense—for does it not make nonsense of the slow move- ment if you hack out most of its development ?—impertinently adds drums to every rep : tition of the four-minim theme in the finale, thereby creating the very effect of tiresome reiteration by literally hammering it out, that Schubert so carefully avoided by his various treatment of it. And when it is done, the work does not seem any shorter, because, whether con- sciously or not, we miss the perfection of its design which makes art timeless. Exactly the same thing happens when Hamlet is played entire ; it emancipates us from the tyranny of the clock, as no shortened version does.

Then is a revival of interest in Schubert at this moment. He has been admitted, along with Haydn, into the company of Mozart at the Sunday evening concerts in the Cambridge Theatre. His Sonatas are being played by Mr. Webster Aitken at the Aeolian Hall, and very well played. The Winterreise cycle was sung by Mr. Raphael the other day.

The Sonatas are commonly supposed to be impromptus of great length without sense of direction and redeemed only by glimpses of Schubert's lyrical genius. That some of the earlier examples, written. when Schubert was twenty years old, are diffuse, owing to his inability to restrain the .very fertility of his ideas, is true. But in his later compositions, like, for instance, the A major Sonata (opus 120) and the G major (opus 78), there is nothing redundant. The first of these two is remarkable alike for the compactness of its form, in which it is equalled by the posthumous Sonata in the same key, and the extraordinary beauty of its melodic ideas. Here, at least, there is that perfect equipoise between matter and manner, which we mean by form. For " form " is not an arbitrary shape, a jelly-mould into which so much material may be poured. Schubert never certainly evolved for himself the original forms that Beethoven achieved in his later years. But Schubert died at the age of 31, younger than Mozart by five marvellous years, at the age when Shakespeare wrote Richard II and Beethoven his Opus 27. The wonder is that, living close to Beethoven and beneath the spell of his mighty genius, Schubert was able to keep his own soul intact. The echoes of Beethoven in his music are rare and confined to details ; his sense of form was unaffected. As Mr. Glock has put it, " What we have to ask ourselves is not whether Schubert succeeded in writing sonatas like Mozart's and

Beethoven's, but whether he reached the height of his powers in these sonatas." And, if we divest ourselves of prejudice and look for what Schubert attempted and not, with one comparing eye on Beethoven, for what he did not set out to do, we must surely answer, nine times out of ten, Yes.