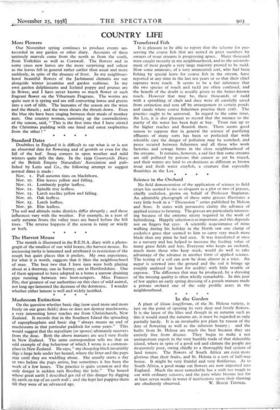 'Our November spring continues to produce events un- recorded in any garden or other diary. Accounts of these 'untimely marvels come from the north as from the south, from Yorkshire as well, as Cornwall. The flowers and in Some cases new leaves are the more surprising and salient as the leaves fell in general rather earlier than usual and more suddenly, in spite of the absence of frost. In nay neighbour- hood beautiful flowers of the jackmanni clematis are out alongside winter jessamine and garden scabious. In my own garden delphiniums and Iceland poppy and prunus are in flower, and I have never known so much flower or such fragrant flower on the Viburnum Fragrans. The worms are quite sure it is spring and are still converting lawns and greens into a sort of filth. The laureates of the season are the wren and the thrush ; and the wren shouts the thrush down. Even the blue tits have been singing between their meals of monkey nuts. One country woman, summing up the contradictions of the season, said, " This is the first time that I have stirred the Christmas pudding with one hand and eaten raspberries from the other ! "

* * * * Standard Dates Doubtless in England it is difficult to say what is or is not an abnormal date for flowering and of growth or even for the fall of the leaf. Snug corners in open weather and mild winters quite defy the date. In the 1939 Countryside Diary of the British Empire Naturalists' Association and pub- lished by Letts and Co., the following attempt to suggest normal dates is made : Nov. x. Full .autumn tints on blackthorn.

The soil 'and altitude make districts differ abruptly ; and these influences vary with the weather. For example, in a year of early autumn frosts the valley trees are bared before the hill trees. The reverse happens if the season is rainy or windy or both. '

The month is illustrated in the B.E.N.A. diary with a photo- graph of the smallest of our wild beasts, the harvest mouse. Its increasing `rarity is lamented and attributed to restriction of the rough but quiet places that it prefers. My own experience, for What it is worth, suggests that it likes the neighbourhood of man. The best two that I have seen were both playing about at a doorway, one in Surrey; one in Hertfordshire. One of them appeared to have adopted as a home a narrow draining pipe running between two boot-scrapers. Miss Frances Pitt, that greatest of our authorities on this class of wild animal, not long aigo lamented the decrease of the dormouse. I wonder whether either lament is well and widely justified.

On the question whether basic slag (now used more and more freely on our grass fields) does or does not destroy mushrooms, a very interesting letter reaches me from Christchurch, New Zealand. It records that in the Southern Island the spreading of superphosphate and basic slag " always means an end of mushrooms in that particular paddock for some years." This would suggest that the mycelium (or spores) ultimately recovers from .the dose. Both the above manures are used very freely in Nevi Zealand. The same correspondent tells me that an odd example of dog behaviour of which I wrote is a common- place in New Zealand. He says, " my sheepdog bitch invariably digs a large hole under her kennel, where the litter and the pups stay until they are waddling about. She usually starts a day Or two before the pups arrive, but sometimes it has been the work of a few hours. The practice is quite common and the only danger is sudden ,rain flooding the hole." The hound whose great earth I described got rid of this danger by digging its earth on top of an earth wall ; and she kept her puppies there till they were of an advanced age. Transferred Fish It is pleasant to be able to report that the scheme for pre- serving the coarse fish that are netted in great numbers by owners of trout streams is progressing apace. Many thousand were caught recently in my neighbourhood, and to the astonish- ment of most people a very large majority proved to be rudd. Now some amateurs, of a very amateurish sort, who had been fishing by special leave for coarse fish in the stream, have reported at any time in the last ten years or so that their chief captures were roach. It seems to be a fair inference that the two species of roach and rudd are often confused, and the benefit of the doubt is usually given to the better-known roach. However that may be, these thousands of rudd with a sprinkling of chub and dace were all carefully saved from extinction and sent off by arrangement to certain ponds and canals where coarse fishermen practise their craft. The practice ought to be universal. In regard to the same river, the Lea, it is also pleasant to record that the menace to the purity of the water has been kept at bay. Trout run up to the higher reaches and flourish there. There seems good reason to suppose that in general the science of purifying effluents of many sorts has been so perfected that with tolerable care the danger of pollution may be scotched, and peace secured between fishermen and all those who work factories and sewage farms in the close neighbourhood of the streams. It remains, however, a sad fact that some streams are still polluted by poisons that cannot as yet be traced, and their waters are fatal to ex-denizens as different as brown trout and fresh water crayfish, a creature that especially

flourishes in the Lea.

Science in the Orchard

No field demonstration of the application of science to field crops has seemed to me so eloquent as a plot or two of grasses, chiefly cocksfoot, grown on behalf of Professor Stapleton. An admirable photograph of these same grasses illustrates a very little book in a " Discussion " series published by Nelson and Sons. It states with persuasive clarity the advance of applied science to farming. The grasses are particularly interest- ing because of the extreme nicety required in the work of hybridising. Happily selection is as important, and this depends not on fingers but eyes. A scientific acquaintance of mine walking during his holiday in the North saw one clump of cocksfoot grass that seemed to him to carry very much more blade than any plant he had seen. It was transferred at once to a nursery and has helped to increase the feeding value of many grass fields and leys. Everyone who keeps an orchard, much more those who keep stock, would do well to take advantage of the advance in another form of applied science. The testing of a soil can now be done almost in a trice. An augur is screwed into the ground and the soil it brings up roughly analysed (at least for acidity) with little trouble or expense. The difference that may be produced, by a dressing of the missing quality is often wholly remarkable. In this year of few apples an early spring dressing of a potash manure made a private orchard one of the only prolific acres in the neighbourhood. * * * *

A plant of ilium longiflorum, of the St. Helena variety, is just on the point of opening its very deep and lovely flowers. It is the latest of the lilies and though in an autumn such as this it would stand the autumn air, it must be regarded as only partially hardy. It is an invaluable pot plant by reason of the date of flowering as well as the inherent beauty ; and the bulbs from St. Helena are much the best because they are entirely free from disease. They begin to make a not unimportant export in the very humble trade of that delectable island, where in spite of a good soil and climate the people are desperately poor, owing chiefly to a thoroughly bad system of land tenure. The flowers of South Africa are even more glorious than their fruits, and St. Helena is a sort of half-way house. It might be very fruitful and very floriferous. As to South Africa, a good many cut flowers are now imported into England. Much the most remarkable has a stalk too tough to cut with ordinary scissors, and the pure white blooms last for at least seven weeks in water if instructions upon their thawing