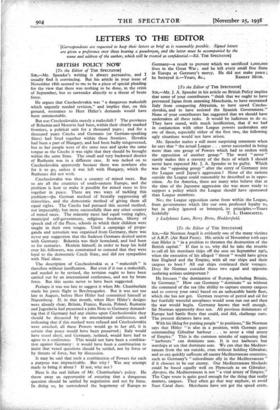 in his article on British Policy implies that some of your contributors " think that we ought to have prevented Japan from annexing Manchuria, to have restrained Italy from conquering Abyssinia, to have saved Czecho- slovakia, and to have assisted the Spanish Government." None of your contributors has suggested that we should have undertaken all these tasks. It would be ludicrous to do so. They have stated, with much justification, that if we had in conjunction with other League powers undertaken any one of these, especially either of the first two, the following ugly situations would 'not have arisen.'

Mr. Spender makes a still more surprising statement when he says. that " the 'actual League . . . never succeeded in being more than one group of Powers which had to reckon with the opposition of another group." The word " never " surely makes this a travesty, of the facts of which I should never have expected Mr. J. A. Spender to be gifilty. Which was the `-`opposing group " after the entry of Germany into the League until Japan's aggression ? None of the nations outside the League could reasonably be described as in oppo- sition. As for America, there are many who believe that at the time of the Japanese aggression she was more ready to support a policy which the League should' have sponsored than League members.

No; the League opposition came from within the League, from governments which like our own professed loyalty to, but in policy ignored or betrayed, its principles.—Yours