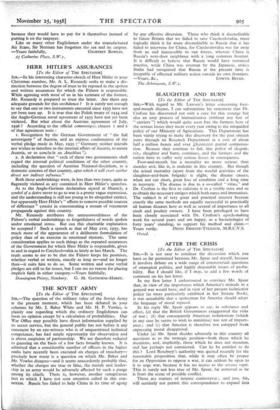 Sit,—In his interesting character-sketch of Herr Hitler in your Christmas number, Mr. A. L. Kennedy seeks to make a dis- tinction between the degree of trust to be reposed in the spoken and written assurances for which the Fiihrer is responsible. While agreeing with most of us in his estimate of the former, Mr. Kennedy is prepared to trust the latter. Are there any adequate grounds for this confidence ? It is surely not enough to say that one or two instruments executed since 1933 have not yet been torn up. It is true that the Polish treaty of 1934 and the Anglo-German naval agreement of 1935 have not yet been violated. But what about the Austrian agreement of July, 1936 ? According to the official communiqué, clauses 1 and 2 of that agreement were : 1. Recognition by the. German Government of " the full sovereignty " of Austria, and an express confirmation of the verbal pledge made in May, 1935 (" Germany neither intends nor wishes to interfere in the internal. affairs of Austria, to annex Austria, or to conclude an Ansch/uss ").

2. A declaration that " each of these two governments shall regard the internal political conditions of the other country, including the question of Austrian National-Socialism, as a domestic concern of that country, upon which it will exert neither direct nor indirect influence."

Both these undertakings were, in less than two years, quite as flagrantly violated as any contained in Herr Hitler's speeches.

As to the Anglo-German declaration signed at Munich, a symbol of a desire never to go to war is a pretty vague expression, and the understanding is still too young to be altogether extinct, but apparently Herr Hitler's " efforts to remove possible sources of difference " consist in concentrating a stream of venomous propaganda against this country.

Mr. Kennedy attributes the untrustworthiness of the Fiihrer's verbal undertakings to forgetfulness of words spoken under emotional stress. But can this charitable explanation be accepted ? Such a speech as that of May mst, 1935, has much more of the appearance of a deliberate formulation of policy than of an exercise in emotional rhetoric. The same consideration applies to such things as the repeated assurances of the Government for which Herr Hitler is responsible, given to and in regard to Czechoslovakia as lately as last March. The truth seems to me to be that the Ratter keeps his promises, whether verbal or written, exactly as long as—and no longer than—it suits him to do so. Some written and some verbal pledges are still so far intact, but I can see no reason for placing implicit faith in either category.—Yours faithfully,