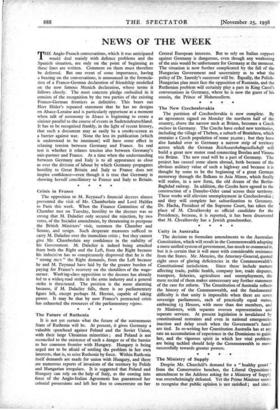 THE Anglo-French conversations, which it was anticipated would deal mainly with defence problems and the Spanish situation, are only on the point of beginning as these lines are written. Comment on them must therefore be deferred. But one event of some importance, having a bearing on the conversations, is announced in the formula- tion of a Franco-German declaration of friendship modelled on the now famous Munich declaration, whose terms it follows closely. The most concrete pledge embodied in it consists of the recognition by the two parties of the existing Franco-German frontiers as definitive. This bears out Herr Hitler's repeated statement that he has no designs on Alsace-Loraine and is particularly opportune at a moment when talk of autonomy in Alsace is beginning to create a sinister parallel to the course of events in Sudetendeutschland. It has to be recognised frankly, in the light of recent history, that such a document may as easily be a smoke-screen as a barrier against war. None the less its publication (which is understood to be imminent) will have some effect in relaxing tension between Germany and France. Its real test is whether it relaxes tension also between Germany's axis-partner and France. At a time when the understanding between Germany and Italy is to all appearance as close as ever the division of labour by which Germany propagates hostility to Great Britain and Italy to France does not inspire confidence—even though it is true that Germany is showing herself conciliatory to France and Italy to Britain.