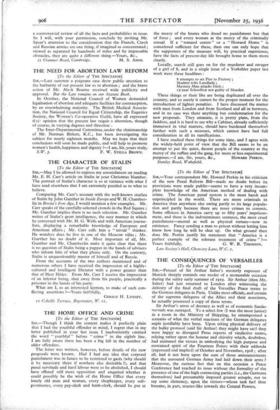 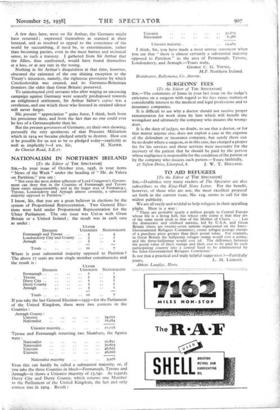 Page 20, 25 November 1938 — THE CONSEQUENCES OF VERSAILLES [To the Editor of THE SPECTATOR]
Close

THE CONSEQUENCES OF VERSAILLES [To the Editor of THE SPECTATOR]

SIR,—Perusal of Sir Arthur Salter's masterly exposure of Munich sharply reminds one reader of a memorable occasion during the sultry early summer of 1919. Sir Arthur (then Mr. Salter) had just returned to London after witnessing the delivery of the final draft of the Versailles Peace terms to the German delegates in Paris. Unlike most officials, and certain of the supreme delegates of the Allies and their associates, he actually possessed a copy of these terms.

Sir Arthur's sense of decency as well as of economic funda- mentals was outraged. To a select few (I was the most junior) in a room in the Ministry of Shipping, he extemporised a scenario of what the verbal reactions of the German delegates might justifiably have been. Upon taking physical delivery of the bulky protocol (said Sir Arthur) they might have said they were happy to disregard Press reports of vindictive terms, relying rather upon the honour and chivalry which, doubtless, had animated the victors in embodying the high purpose and restrained spirit of the Fourteen Points with their addenda (expressed and implied) of October and November, 1918 ; after all, had it not been upon the sum of those announcements that the unrouted German Army had laid down their arms ? Moreover, the curious fact that on this occasion a. Peace Conference had reached its issue without the formality of the presence of one of the high contracting parties (i.e., the Germans themselves) had presumably imposed greater scruple, not to say some clemency, upon the victors—whose task had thus become, in part, trustee-like towards the Central Powers.

A few days later, went on Sir Arthur, the Germans might have returned ; expressed themselves as stunned at their betrayal, and as resolved to appeal to the conscience of the world by succumbing, if need be, to extermination, rather than becoming parties, even in the most barren and technical sense, to such a travesty. I gathered from Sir Arthur that the Allies, thus confronted, would have found themselves at a loss, or at any rate in the wrong.

Nothing in Sir Arthur's disquisition at that time, however, obscured the existence of the one shining exception to the Treaty's injustices, namely, the righteous provisions by which Czechoslovakia was created, and its Germano-Bohemian frontiers (far older than Great Britain) preserved.

To uninstructed civil servants who after waging an unceasing campaign against Germany were scarcely predisposed towards an enlightened settlement, Sir Arthur Salter's exposé was a revelation, and one which those who listened in strained silence will never forget.

His present " appreciation " gains force, I think, both from his prescience then, and from the fact that no one could ever be less of a Germanophobe than he.

But the present governors of Germany, on their own showing, personify the very apotheosis of that Prussian Militarism which in 1914 we became pledged utterly to destroy. How can it be possible for us not to be so pledged today—explicitly as