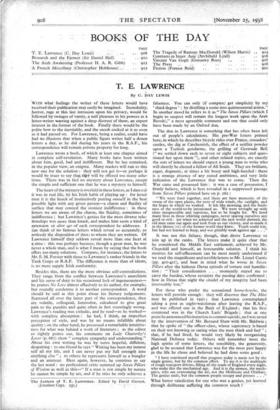 Wait what feelings the writer of these letters would have received their publication may easily be imagined. Incredulity, horror, rage at this last intrusion upon his privacy, would be followed by twinges of vanity, a nail* pleasure in his powers as letter-writer warring against a deep distrust of them, an expert interest in the format of the book. Finally there would be the polite bow to the inevitable, and the snook cocked at it as soon as it had passed on. For Lawrence, being a realist, could haVe had no illusions that when a public figure writes half a dozen letters a day, as he did during his years in the R.A.F., his correspondence will remain private property for long.

Lawrence wrote a book, of which at least one chapter aimed at complete self-revelation. Many books have been written about him, good, bad and indifferent. But he has remained, in the popular view, an enigma. Many readers will run to this new one for the solution : they wilt not get it—Or perhaps it would be truer to say thavlitt will be offered too many dons. There was in fact no mystery about Lawrence, except the simple. and sufficient one that he was a mystery to himself.

The heart of the mystery is overlaid in these letters; as I dare say it was in real life, by his Irish habit of playing up : for lessee men it is the knack of instinctively putting oneself in the best Possible light with any given person—a charm and fluidity of surface that may conceal the stoniest indifference : in these fetters we are aware of the charm, the fluidity, sometimes of indifference ; but Lawrence's genius for the most diverse rela.' tionships was more than knack, and makes him seem a kind of extension or alter ego of each correspondent he addresses. I- 6an think of no famous letters which reveal so accurately, so artlessly the disposition of those to whom they are written. Of Lawrence himself they seldom reveal more than one facet at a time : this was perhaps because, though a great man, he was never a whole man, and is what I mean by saying that the book offers too many solutions. Compare, for instance, the letters to Mr. E. M. Forster with those to Lawrence's ranker friends in the. Tank Corps or R.A.F. The difference is more than of idiom, is no mere supple Irish conformity.

Besides this, there are the more obvious self-contradictions. They range from the conflict between Lawrence's anarchism and his sense of duty to his occasional lack of ingenuousness-7 he praises No Love almost effusively to its author, for example; but roundly condemns it to another correspondent. A' word should be said at this point about his literary judgements: Scattered all over the latter part of the correspondence, they are volatile, colloquial, heterodox, calculated to give great pain to the pundits and quite often in fact stunningly wrong. La, wrence's reading was catholic, and he read—as he worked— with complete absorption : he had, I think, an imperfect perception of style, and was by no means infallible about quality ; on the other hand, he possessed a remarkable intuitive- ness for what was behind a work of literature ; as the editor. so rightly points out, his comments on Lady Chatterley's Lover (p. 687) show " complete sympathy and understanding." About his own writing he was by turns hopeful, diffident, despairing : to one friend he says " Writing has been my inmost self all my life, and I can never put my full strength into anything else " ; to others he represents himself as a bungler and an amateur. Here again, however, he contrives to say the last word : no professional critic summed up Seven Pillars of Wisdom as well as this—" If a man is not simple by nature he cannot be simple by art, and if he tries he only achieves a The Letters of T. E. Lawrence. Edited by David Garnett. (Jonathan' Cape. 25s.) falseness. You can only (if complex) get simplicity by my ' third degree ' : by distilling a scene into quintessential action?! In another mood he refers to it as " The Seven' Pillars (which I

begin to suspect will remain the longest work upon the Arab Revolt)," a most agreeable comment and one that could only have been made by an Oxford don.

The don in Lawrence is something that has often been left out of people's calculations: 'His pre-War letters printed

here, in which he describes bicycle rides over France, crusaders' castles, the .dig at Carchemish, the effect of a seidlitz .powder upon a Turkish gendarme, the grilling of Gertrude Bell (" we settled down each to seven or eight subjects and ques- tioned her upon them "), and other related topics, are exactly

the sort of letters we should expect a young man to write who will shortly be elected a fellow of All Souls. They are brilliant,

eager, dogmatic, at times a bit bossy and high-handed : there is a strange absence of any -stated ambitions, and very little

indication of the Lawrence that was to come. Then the War came and possessed him : it was a case of possession, I firmly believe, which is best revealed in a suppressed passage from Seven Pillars printed here on p. 262 :

" We were fond together, -and there are here memories of the sweep of the open places, the taste of wide winds, the sunlight, and the hopes in which we worked. It felt like morning, apd the fresh- ness of the world-to-be intoxicated us. 'We were wrdught up with ideas inexpressible and vaporous, but to be fought for. We lived many lives in those whirling campaigns, never sparing ourselves any good or evil : yet when we achieved and the new world dawned, the old men came out again and took from us our.victory, and re-made it in the likness (sic) of the former world they knew. Youth could win, but had not learned to keep, and was pitiably weak against age . . ."

It was not this failure; tholigh, that, drove Lawrence to

join up in the ranks. The. letters .make it quite clear that he considered • the Middle. East settlement, achieved by Mr. Churchill and himself, an honourable solution. I think his motives for self-effacement can be most nearly understood if

we read the magnificent and terrible letters to Mr. Lionel Curtis (pp. 410-421), and bear in mind what he wrote in Seven

Pillars after the hideous Deraa episode of torture and humilia•-, don : " Their consideration . . . momently stayed me to carry- the burden,'"whose certainty the passing days "confirmed : how in Deraa that night the citadel of my integrity had been irrevocably lost."

For those who prefer the sensational bonne-bouche, the letters will provide enough : they will discover that The Mint may be published in 195o ; that Lawrence contemplated taking a post as night-watchman after leaving the R.A.F., and was offered one in the Bank of England ; that his first command was in the Church Lads' Brigade ; that at one point he announced his intention to commit suicide, and was saved by the intervention of Mr. Bernard Shaw with Mr. Baldwin ; that he spoke of " the officer-class, whose supremacy is based on their not knowing or caring what the men think and feel " ; that, if he had lived, he would very likely be reorganising National Defence today. Others will remember 'most the high spirits of some letters, the sensibility, the generosity, glad to be assured that Lawrence was for the most part happy in the life he chose and believed he had done some good :

" I have convinced myself that progress today is made not by the single genius, but by the common effort. To me it is the multitude of rough transport drivers, filling all the roads of England every night, who make this the mechanical age, And it is thg airmen, the mech- anics, who are overcoming the airs not the Molhsons and Orlebars. The genius raids, but the common people occupy and possess . . ."

What better valediction for one who was a genius, yet learned through deliberate suffering the common winch ? . .