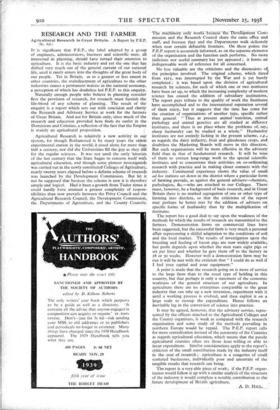 RESEARCH AND THE FARMER

IT 'is significant that P.E.P., the label adopted by a group of engineers, administrators, business and scientific z men, all interested in planning, should have turned their attention to agriculture. It is the basic industry and yet the one that has drifted very much out of the general, current of our national life, until it rarely enters into the thoughts of the great body of our people. Yet in Britain, as to a greater or less extent in other countries, the maladjustment of agriculture to the other industries causes a permanentinalaise in the national economy, a perception of which has doubtless led P.E.P. to this enquiry.

Naturally enough people who believe in planning consider first the provision of research, for research must furnish the life-blood of any scheme of planning. The result of the enquiry is a• report which sets out with concision and clarity the ReSearch and Advisory Service at work for the farmers of Great Britain. And not for Britain only, since much of the research and. education provided here finds its outlet in the Dominions and Colonies, a reflection of the fact that the Empire is mainly an agricultural proposition.

. Agricultural Research is relatively a new activity in our system, for though Rothamsted is by many years the oldest experimental ,station in the world, it stood alone for more

half a century; nor -did the Universities fill the gap as they did for the regular sciences. It was not until the early 'nineties of the last century that -the State began to concern itself with agricultural education, and though some pioneer investigation was carried out in the newly constituted Colleges of Agriculture, nearly twenty years elapsed before a definite scheme of research was launched by the Development Commission. But let it not be supposed that because the scheme is new it is therefore' pimple and logical. Had it been a growth from Tudor times it could hardly have attained a greater complexity of respon- sibilities than now prevails between the. Privy Council and the. Agricultural Research Council, the Development Commission, the Departments of Agriculture, and The County Councils. mission and the Research Council share the same office and staff, and because they and the Departments walk delicately when near certain 'debatable frontiers. On these points the P.E.P. report is accurately informed, as on the separate elements of the organisation and the function each performs. No more judicious nor useful summary has yet appeared ; it forms ati' indispensable work of reference for all concerned.

No less valuable- are the criticisms and the discussions the principles involved. The original scheme, which date from 1911, was interrupted by the War and is yet barely completed ; it was based upon the division of agricultural research by sciences, for each of which one or two institutes have been set up, to which the increasing complexity of modern science has caused the addition of subsidiary institutions.. The report pays tribute to the quality of work the Institutes, have accomplished and to the international reputation several of them enjoy, but it suggests that the time has come kir the creation of organisations of another type, specific rather than general. " Thus at present animal' nutrition, animal' pathology and animal genetics are all studied at different institutes, and there is no place where the problems of, say; sheep husbandry can be studied• as a whole." Husbndry' institutes are not entirely. lacking in the present scheme, e.g.; as regards the dairy industry, fruit and glasshouse crops, and doubtless the Marketing Boards will move in this direction.', But such organisations will be more effective in the advisory, field than in that of fundamental research. It will be wise of them to entrust long-range work to the special scientific institutes and to concentrate their activities on co-ordinatingi research with practice and in making closer contacts with the!. industry. Continental experience shows the value of smalli ad hoc stations set down in the district where a particular form', of farming prevails, as against the general advisers—chemists,' pathologists, &c.—who are. attached to our Colleges. There: must, however, be a background of basic research, and in Great Britain there is no marked segregation of one or other type of farming into districts, so that the criticisms of the report may perhaps be better met by the addition of advisers on Specific forms of husbandry than by the multiplication of institutes.

The report has a good deal to say upon the weakness of the' methods by which the results of research are transmitted to the: farmers. Demonstration farms on commercial lines have been suggested, but the successful farm is very much a personal, affair representing a skilful adaptation to the conditions of soil- and the local market. The results of investigation upon the breeding and feeding of bacon pigs are now widely available, but profit depends upon whether the man rears eight pigs or six per litter and whether he gets them off to the factory in 28 or 3o weeks. However' well a demonstration farm may be run it will be met with the criticism that " I could do as well if I had your capital and your equipment."

A point is made that the research going on is more of service to the large farm than to the usual type of holding in this country, but that perhaps is only a statement of the economic weakness of the general structure of our agriculture. In agriculture there are no enterprises comparable to the'great industry that can take up a new invention, experiment with it Until a working process is evolved, and then exploit it on a large scale to recoup the expenditure. Hence follows an inevitable lag in the conversion of science into practice.

It may be agreed, however, that the advisory service, repre- sented by the officers attached to the ,Agricultural Colleges and the County organisers, is weak as compared with the research organisation and some study of the methods prevailing in

northern Europe would be -repaid. The P.E.P. report calls for more centralisation instead of the autonomy of the Counties as regards agricultural education, which means that the purely agricultural counties often are those least willing or able to. incur incur expenditure. Similar considerations apply to the report's criticism of the small contribution made by the industry itself to the : cost .of. research-;. - agriculture is a congeries of small scattered businesses, individually poor and -uncertain of the tangible results that research can bring.

The report is a very able piece of work; if the P.E.P. organ- isation would follow it Up with a similar analysis' of the structure of the industry it would complete a notable contribution to the :future development of British agritulture. - _..A. D., .