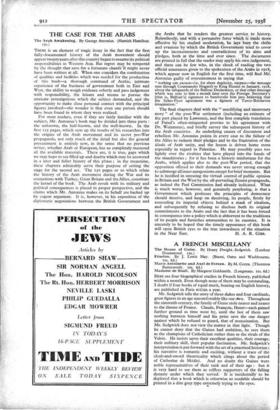 THE CASE FOR THE ARABS

15s.) THERE is an element of tragic irony in the _fact that the first fully-documented history of the Arab movethent should appear twentyyears after this country began to assume its political responsibilities in Western Asia. But regret may be tempered by the thought that -save for a fortunate chan& it-might never

have been written at When one considers the combination of qualities and facilities which was needed for the production of this book—a thorough command of Arabic, intimate experience of the business of government both in East and West, the ability to weigh evidence soberly and pass judgement with responsibility, the leisure and means to pursue the intricate investigations which the subject demanded, and the opportunity to make close personal contact with the principal figures. involved—the wonder is that even one person should have been found in whom they were realised. .

For most readers, even if they are fairly familiar with the subject, Mr. Antonius's book may be divided into. three parts : the unknown, the half-known, and the well-known. In the first 125 pages, which sum up the results of his researches into the origins of the Arab movement and its secret pre-War propaganda, not only much of the detail but also the general presentment is entirely new, in the sense that no previous writer, whether Arab or European, has so completely mastered all the available materials. There are, it is true, gaps which we may hope to see filled up and doubts which may be answered in a later and fuller history of this phase ; in the meantime, these chapters, admirably serve their purpose of setting the stage for the second act. The iso pages or so which relate the history of the Arab movement during the War and its connexions with Turkey, Great Britain and the Allies, constitute the kernel of the book. The Arab revolt with its military and political consequences is placed in proper perspective, and the claims which Mr. Antonius makes on its behalf are backed up by cogent argument. It is, however, in his exposition of the diplomatic negotiations between the British Government and

the Arabs that he renders the greatest service to history.

Relentlessly, and with a persuasive force which is made more effective by his studied moderation, lie lays bare the shifts and evasions by which the British Government tried to cover up the inconsistencies and contradictions of its aims and pledges, both at the time and ever since. The documents are printed in full that the reader may apply his own judgement; and there can be few who, in . the shock of reading the two official assurances given to the spokesmen of the Arabs in 1918, which appear now in English for the first time, will find Antonius guilty of overstatement in saying that.

" nothing can excuse—or, for sheer duplicity, surpass--die message sent through Commander Hogarth to King Husain in January, 1918, about the safeguards of the Balfour Declaration, or that other message which was sent to him a month later over the Foreign Secretary's [that is, l3alfour's] signature to bambooile him into believing that the Sykes-Picot agreement was a figment of Turco-Bolshevist imagination."

The. final chapters deal with the." unedifying and -unsavoury story " of the post-War settlement (including an estimate of the part played by LawrenCe, and the first complete translation of Faisal's often-misquoted proviso to his agreement with Dr. Weizmann), and briefly survey the subsequent history of the Arab countries.' As underlying causes of discontent and rebellion Mr. .Antonius points in every case tct the failure of the Allies to redeem their pledges and to the frustration of the ideals of Arab unity, and the lesson is driven home more especially -in regard to Palestine. He- May-possibly- pass too lightly over the rivalries that have played into the hands of the mandatories ; for it has been a historic misfortune for the Arabs, which applies also to the post-War period; that the

opposition offered to their demands' was never strong enough to submerge all inner antagonisms except for brief moments. But he is justified in stressing the virtual control of public opinion in Britain and the West by the all-pervading Zionist propaganda, as indeed the Peel Commission had already indicated. What is much worse, however, and genuinely perplexing, is that a Government which professes the principles of democracy should deceive, and keep on deceiving, its people, firstly by concealing its imperial objects behind a mask of idealism, and subsequently by refusing to disclose both its original commitments to the Arabs and the fact that it has been forced in consequence into a policy which is abhorrent to the traditions of its people and furnishes ammunition to its enemies. It is sincerely to be hoped that the timely appearance of this book will open British eyes to the true inwardness of the situation