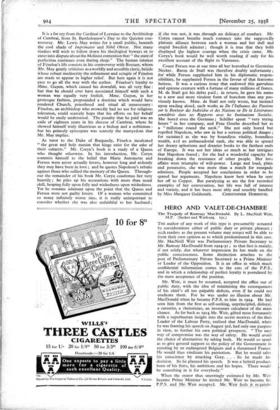 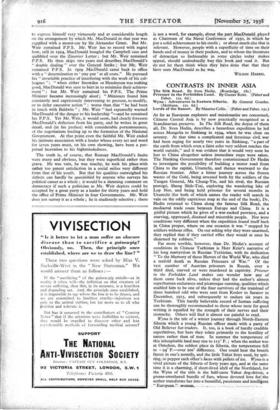 THE author of any work of this type is presumably actuated by considerations either of public duty or private pleasure ; such readers as the present volume may attract will be able to form their own opinion as to which predominated in this case. Mr. MacNeill Weir was Parliamentary Private Secretary to Mr. Ramsay MacDonald from 1924-31 ; to that fact is mainly, if not solely, due whatever impression he has made on the public consciousness. Some distinction attaches to the post of Parliamentary Private Secretary to a Prime Minister or Leader of the Opposition. It is an office in which much confidential information comes to the ears of the P.P.S., and in which a relationship of perfect loyalty is postulated by the mere acceptance of the position.

Mr. Weir, it must be assumed, accepted the office out of public duty, with the idea of minimising the consequences of his chief's all too palpable defects, even if he could not eradicate them. For he was under no illusion about Mr. MacDonald when he became P.P.S. to him in 1924. He had seen him from the first as self-seeking, unprincipled, disloyal, a careerist, a rhetorician, an inveterate calculator of the main chance. As far back as 1914 Mr. Weir, gifted most fortunately with a superhuman insight into the secret motives of the then Leader of the Labour Party, realised that MacDonald, when he was framing his speech on August 3rd, had only one purpose in view, to further his own political prospects. " The easy way of compromise was the way of safety. . He would avoid the choice of alternatives by taking both. He would so speak as to give general support to the policy of the Government in standing by an -endangered Belgium and a threatened France. He would thus vindicate his patriotism. But he would salve his conscience. by attacking Grey. . . So he made his decision. So he planned his speech. It was a hybrid product. born of his "fears, his ambitions and his hopes. There would be something in it for everybody."

When the orator thus unerringly estimated by -Mr. Weir became Prime Minister he- invited Mr. Weir --to become his P.P.S. and Mr. Weir accepted. Mr. We feels it re juisite to express himself very. virtuously and at considerable length on the arrangement by which Mr. MacDonald in that year was supplied with a motor-car by Sir Alexander Grant. But Mr. Weir remained P.P.S. Mr. Weir has to record with regret how, still in 1924, MacDonald bungled the Campbell case and quibbled over the Zinoviev Letter ; but Mr. Weir remained P.P.S. He then skips two years and describes „MacDonald's " double dealing" over the General Strike ; but Mr, Weir remained P.P.S, jn 1929 MacDonald; came back to office with a " determination to ' stay put ' at all costs." He pursued his " invariable practice of interfering with the work of his col-. leagues " ; " when either Snowden or Henderson was making good, MacDonald was sure to butt in to minimise their achieve- ment " ; but Mr. Weir' remained, his P.P.S. The Prime Minister became increasingly aloof ; " Ministers found him constantly and capriciously intervening to prevent, to modify, or to delay executive action " ; wotse than tliat " he had been in touch with Baldwin " ; Mr. Weir " had repeatedly warned MacDonald of the danger to his leadership "—and he remained his P,P.S. Yet Mr. Weir, it would seem, had clearly foreseen MacDonald's defection from his party, and he writes in great detail, and (in his preface) with considerable portentousness, of the negotiations leading up to the formation of the National Government. At that point even the faithful Mr. Weir ended his intimate association with a leader whose every act and word for seven years must, on his own showing, have been a per- petual laceration to his highmindedness.

The truth is, of course, that Ramsay MacDonald's faults were many and obvious, but they were superficial rather than grave: He was vain, he was touchy, he took his place with rather too patent satisfaction in a social milieu very different from that of his youth. But that his qualities outweighed his defects can hardly be questidied by anyone who surveys his political career as a whole ; it would be a damning comment on democracy if such a politician as Mr. Weir depicts could be accepted by a great party as a leader for thirty years and hold the office of Prime Minister in four Governments. Mr. Weir does not survey it as a whole ; he is studiously selective ; there- is not. a word, for example, about the-part-_MacDonald• played as Chairman of the Naval Conference of 1930, in which he put a solid achievement to his credit ; or about much else that is relevant. However, people with a superfluity of time on their hands and of money in their pockets, and to whom the literature of detraction so fashionable in some cksles today makes appeal, should undoubtedly_ buy this book and read it. But do not let them think when they have done that that they have seen MacDonald as be. WaS, WILSON HARRIS.