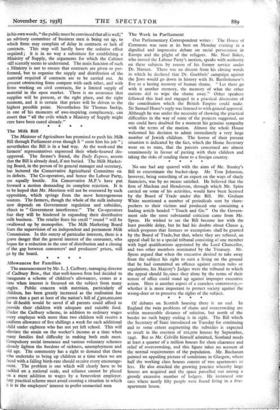 Of debates on Scottish housing there is no end. In

England the twin problems of slums and overcrowding are within measurable distance of solution, but north of the border no such happy ending is in sight. The Bill which the Secretary of State introduced on Tuesday for continuing and to some extent augmenting the subsidies is expected to result in the erection of 102,000 houses by September, 1942. But as Mr. Colville himself. admitted, Scotland needs at least a quarter of 'a million houses for slum clearance and relief of overcrowding, and this figure takes no account of the normal requirements of the population. Mr. Buchanan painted an appalling picture of conditions in Glasgow, where half the working class houses consist of two apartments or less. He also attacked the growing practice whereby large houses are acquired and the space parcelled out among a grossly excessive number of lodgers. He instanced one case, where nearly fifty people were found living in a five- apartment house.