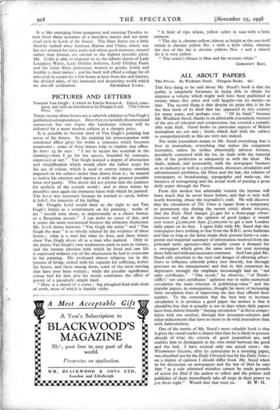 Vincent Van Gogh: Letters to Emile Bernard. Edited, trans- lated, and with an introduction by Douglas Lord. (The Cresset Press. t5s.) THESE twenty-three letters are a valuable addition to Van Gogh's published correspondence. Here they are lavishly illustrated and annotated, but one hopes this handsome volume will be followed by a more modest edition at a cheaper price.

It is possible to become tired of Van Gogh's painting but never of his letters. In his painting his preoccupation with emotional effect gives his works a sameness which becomes wearisome ; some of these letters help to explain that effect. In letter 23 he says : " I try to secure the essential in the drawing—then I go for the spaces, bounded by contours, expressed or not." Van Gogh wanted a degree of abstraction and simplification which would allow the fullest scope for his use of colour, which is used to convey intense emotion imposed on the subject rather than drawn from it ; he wanted to isolate his emotion and express it with the greatest possible force and purity. This desire did not permit him the patience for analysis of the outside world ; and in these letters he describes once again the immense haste with which he painted. The haste was necessary because he wanted to catch, before it faded, the intensity of his feeling.

Mr. Douglas Lord would deny us the right to use Van

• Gogh's letters as a commentary on his painting : works of art " should exist alone, as impersonally as a choice bronze or a Byzantine mosaic." I can make no sense of this, and it seems the more nonsensical because the arbitrary distinction Mr. Lord draws between " Van Gogh the artist " and " Van Gogh the man " is so wholly refuted by the evidence of these letters ; what is a man but what he does, and these letters show Van Gogh above all as a man who painted. Only in the letters Van Gogh's very weaknesses seem to turn to virtues, and the intense emotion with which he lived and saw life is expressed without any of the obstruction he had to overcome in his painting. His profound almost religious joy in the process of living, united with his capacity for suffering, makes his letters, and these among them, some of the most moving that have ever been written ; while the peculiar significance colour had for him give his words sometimes the effect of poetry of a peculiarly simple kind.

" The sower's blouse is blue and his trousers white."