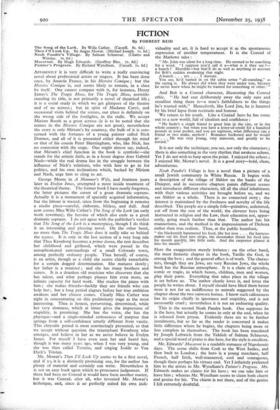 standing its title, is not primarily a novel of theatrical life ; it is a social study in which we get glimpses of the theatre and of an actress ; but in spite of Madame Carre, and occasional visits behind the scenes, our place is definitely on the wrong side of the footlights, in the stalls. We accept Miriam Rooth as a great actress (it is to be noted that the mimes in the Histoire Comique are not great), nevertheless the story is only Miriam's by courtesy, the bulk of it is con- cerned with the fortunes of a young painter called Nick Dormer, and all of it is presented either through his mind or that of his cousin Peter Sherringham, who, like Nick, has no connexion with the stage. One might almost say, indeed, that Miriam's chief function in the book is symbolic—she stands for the artistic faith, as in a lesser degree does Gabriel Nash—while the real drama lies in the struggle between the influence of Nick's relations, who wish him to go in for politics, and his own inclinations which, backed by Miriam and Nash, urge him to cling to art.

George Moore in A Mummer's Wife, and fourteen years later in Evelyn Innes, attempted a more inside treatment of the theatrical theme. The former book I have nearly forgotten, the latter pictures the career of a great dramatic soprano.

Actually it is a monument of specially acquired information, but the labour is wasted, since from the beginning it remains a studio piece—careful, elaborate, lifeless, and dull. And now comes Miss Willa Cather's The Song of the Lark (an early work rewritten), the heroine of which also ends as a great dramatic soprano. I do not agree with the publisher's verdict that The Song of the Lark is a masterpiece, though I do think it an interesting and pleasing novel. On the other hand, no more than The Tragic Muse does it really take us behind the scenes. It is only in the last section of a very long tale that Thea Kronborg becomes a prima donna, the rest describes her childhood and girlhood, which were passed in the unsophisticated surroundings of a small Colorado town, among perfectly ordinary people. Thea herself, of course, is an artist, though as a child she seems chiefly remarkable for a certain dogged determination. She matures slowly ; her father is a minister ; and she has many brothers and sisters. It is a drunken old musician who discovers that she has talent, and what perhaps pleases him even more, an infinite capacity for hard work. She studies the piano with him ; she makes friends—luckily they are friends who can help her ; but a long period elapses before her true ambition awakens and her chance comes. Clearly Miss Cather was right in concentrating on this preliminary stage as the most interesting. Thea is honest, persevering, determined, while her very slowness, which at times gives the impression of stupidity, is promising. She has the voice, she has the physique—and a single-minded seriousness of purpose that springs from a self-confidence utterly different from vanity.

This chrysalis period is most convincingly presented, so that we accept without question the triumphant Kronborg who emerges, and believe in her as we never believe in Evelyn Innes. For myself I have even seen her and heard her, though it was many years ago, when I was very young, and she was then called Teraina, and singing Isolde to Van Dyck's Tristan.

Mr. Mowat's Then I'll Look Up seems to be a first novel,

and if s3, it is a distinctly promising one, for the author has plenty of material and certainly can write. Nevertheless it is not an easy book upon which to pronounce judgement. If there had been no Conrad it would have been another matter, but it was Conrad, after all, who invented Mr. Mowat's technique, and, since it so perfectly suited his own

viduality and art, it is hard to accept it, as the spontaneous expression of another temperament. It is the Conrad of

" Mr. John was silent for along time. He seemed to be searching for a word. ' I suppose you'd call it a—what is it they say ?- a hunch ? Horrible—but that'll do as well as anything to account for Bob's sudden awakening that night.

A hunch . . . yes . . . I daresay. You see, he'd turned in on the cabin settee " all-standing," as the saying is. He always did when they were under way, because he never knew when he might be wanted for something or other.' "

And Bob is a Conrad character, illustrating the Conrad ethic. " He had cast deliberately away the only mire and

steadfast thing there is—a man's faithfulness to the things he's trusted with.' Henceforth, like Lord Jim, he is haunted by his brief lapse from rectitude and honour.

We return to his youth. Like a Conrad hero he has come

out to a new world, full of idealism and cOnfidence : " He hadn't a single friend to greet him in the city, or in the whole country ; but when you have a letter-of-credit for a hundred pounds in your pocket, and you are eighteen, what difference can a friend or two make, anyhow ! Romance beckoned and he would go . . . He was very young, very innocent, and greatly to be envied."

It is not only the technique, you see, not only the characters ; there is also something in the very rhythm that awakens echoes. Yet I do not wish to harp upon the point. I enjoyed the echoes ; I enjoyed Mr. Mowat's novel. It is a good story—bold," clean,

Noah Pandre's Village is less a novel than a picture of a small Jewish community in White Russia. It begins with a 'description of the village of Shldov on the banks of the Dnieper, and in successive chapters paints different scenes and introduces different characters, till all the chief inhabitants with their various activities are brought before us, and we see Shldov as a whole. There is no connected story ; the interest is maintained by the freshness and novelty of the life described. The people are a simple folk—primitive, unlettered, cut off from the rest of the world, the cleverer boys being instructed in religion and the Law, their education not, appar- ently, going much further than that. The author has his mannerisms, and the method is the impressionism of Dickens rather than true realism. Thus, at the public beanfeast,

" the blacksmith hammered his food, like hot iron . . . the harness- maker cut leis food into strips, the shoemaker thrust his food into his mouth quickly, like little nails. And the carpenter planed it into his mouth."

Here the, exaggeration merely irritates : on the other hand,

the most fantastic chapter in the book, Yarillo the God, is among the best ; and the general effect is of truth. The charac- ters, though they are Jews, are very Russian Jews, the whole book has the Russian atmosphere. It is a chain of episodes, comic or tragic, in which beasts, children, men and women, play their parts. Everything that takes place in the village is set before us. The author clearly loves it, and loves the people he writes about. I myself should have liked them better were it not for an indifference to animals suggested by the chapter about the two outworn horses. I know such callousness has its origin chiefly in ignorance and stupidity, and is not necessarily cruel ; nevertheless it is not an endearing quality.

This is the second Noah Pandre book. One supposes he is the hero, but actually he comes in only at the end, when he is released from prison. Evidently there are to be further instalments, but so far as the reader is concerned it makes little difference where he begins, the chapters being more or less complete in themselves. The book has been translated by Joseph Leftwich from the Yiddish of Salman Schneour, and a special word of piaise is due here, for the style is excellent.

Mr. Edwards' Macaroni is a readable romance of Napoleonic

days. The scene shifts from Cork to the West Indies, and then back to London ; the hero is a young merchant, half

French, half Irish, well-mannered, cool and courageous, though there perhaps his virtues end. Yet I infinitely preferred him to the artists in Mr. Wyndham's Painter's Progress. Mr. Edwards makes no claims for his hero ; we can take him or leave him ; whereas Mr. Wyndham seems to claim both charm and genius for his. The charm is not there, and of the genius I felt extremely doubtful.