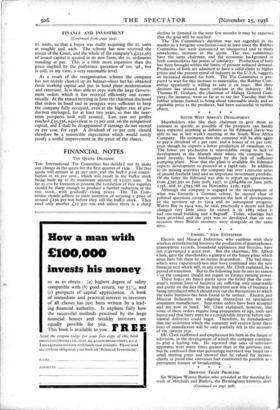 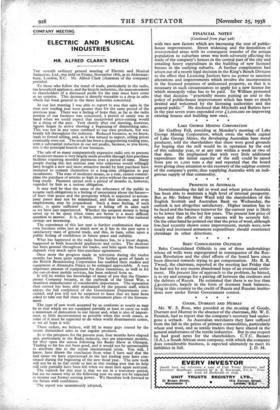 Page 40, 25 November 1938 — THE International Tin Committee has decided not to make any
Close

THE International Tin Committee has decided not to make any

change in the quota for the first quarter of 1939. The free quota will remain at 35 per cent. and the buffer pool contri- bution at so per cent., which will result in the buffer stock being. built up to its maximum amount of 15,000 tons. So far as can be foreseen at present the restriction of free supplies should be sharp enough to produce a further reduction in the free stock, : with gradually rising prices. The Tin Com- mittee clearly adhere to their intention of securing a price of around £230 per ton before they sell the buffer stock. They need only another £15 per ton and unless there is a sharp decline in demand in the next few months it may be expected that the goal will be reached.

The Tin .Conunittee's • decision was not .:regarded in the market as a foregone conclusionnot at least since the Rubber Committee last week announced .an unexpected and to many unwelcome, increase in the quota. The two committees have the same chairman, and the economic background of both commodities has points of similaiity. Production of both has been brought within the limits of present reduced demand. Producers of both are admitted to have a- valid claim to higher prices and the present trend of industry in the U.S.A. suggests an increased demand for both. The Tin Committee is pre- pared to wait for this increase to materialise, the Rubber Com- mittee apparently is willing to take it on trust. But their decision has aroused much criticism in the industry. Mr. Thomas H. Graham, the chairman of Malaya General Com- pany, for instance, went so far as to say last Tuesday that the rubber scheme formed to bring about reasonable stocks and an equitable_ price to the producer, had been successful in neither object.

SOUTH WEST AFRICA'S DEVELOPMENT Shareholders who like their chairman to give them an estimate as specific as possible of the prospects can hardly have expected anything as definite as Sir Edmund Davis was able to say at last week's meeting of the South West Africa Company. He estimates that the company, will be able again to pay a dividend of 5 per cent. and a bonus of to per cent. even though he expects a lower production of vanadium ore. The lower ore production is unavoidable owing to lack of development at -the Abenab mine where -the company has, until recently, been handicapped by the lack of sufficient pumping plant. Now that the plant is available Sir Edmund expects development to proceed at a rapid rate. In addition to its mining activities the company has over s,000,000 acres of unsold freehold land and an important investment portfolio. Of the latter Sir Edmund was able to report an appreciation from £597,330 on June 3oth, 1937, to £684,684 on June 3oth, 1)38, and to £693,768 on November 15th, 1938.

Although the company is engaged in -the development of what was formerly a German colony, he steered clear of political questions except to contrast the lack of development in the territory up to 1914 and its subsequent progress. Walvis Bay in 1914 was, he said, practically a desert and had changed very little since he visited it in 1883 when it had one small building and a flagstaff. Today, wharfage had been provided and the port was so developed that on one occasion three British steamers were alongside at the same time. * * * *

`,` Emmus " NEW ENTERPRISE Electric and Musical Industries, .who combine with their wireless manufacturing business the production of gramophones, gramophone records, household appliances and bicycles, have not experienced a good year. But the chairman, Mr. Alfred Clark, gave the shareholders a glimpse of the future plans which must have left them by no means despondent. The bad times which were experienced last year have continued into the new financial year which will, in any event, Mr. Clark explained, be a period of transition. But in the following year he sees no reason v by the company should not regain its former earning power.

These hopes are based partly upon the belief that the com- pany's normal lines of business are suffering only temporarily and partly on the fact that an important new line of business is being introduced which should iron out the fluctuations to which the radio business has been found to be subject. Electric and Musical Industries are adapting themselves to specialised armament manufacture. Important orders have been accepted and are now in hand. Mr. Clark explained, however, that some of these orders require long preparation of jigs, tools and layout and that there must be a considerable interval before sub- stantial deliveries could begin. Therefore, he foreshadowed that the assistance which the company will receive from these lines of manufacture will be only partially felt in the accounts of the current year.

- Mr. Clark reaffirmed and emphasised his faith in the future of television, in the development of which the company continues to play a leading role. He reported that Sales of television apparatus were many times greater than in the previous year, but he confessed that that percentage increased was based on a small starting point and showed' that he 'valued the increase chiefly as proof that television had established its position as a permanent feature of broadcasting.

with two new factors which are increasing the cost of public- house improvement. Street widening and the demolition of overcrowded areas with its consequent transfer of the artisan population to suburban areas was both adversely affecting the trade of the company's houses in the central part ofthe city'and entailing heavy expenditure in the building of new licensed houses in the outlying suburbs. A further complication had arisen out of a recent legal decision in the King's Bench Division to the effect that Licensing Justices have no power to sanction alterations and improvements which involve the incorporation in the licensed premises of unlicensed property, so that it is necessary in such circumstances to apply for a new licence for which monopoly value has to be paid. Sir William protested that that decision " practically means putting an end to the policy of public-house improvement which has been so much desired and welcomed by the licensing authorities and the general public." He disclosed that Mitchells and Butlers have in the past seven years expended over £1,000,000 on improving existing houses and building new ones.

LAKE GEORGE MINING CORPORATION Sir Godfrey Fell, presiding at Monday's meeting of Lake George Mining Corporation, which owns the whole capital of Lake George Mines, the developing Australian base metal producer, told the shareholders that there were good grounds for hoping that the mill would be in operation by the end of this calendar year,. or at any rate within. a week. or .two of that date. He emphasised that with very little additional expenditure the initial capacity of the mill could be raised from 500 to t,000 tons a day and reported that the board were giving close attention to the recovery of the sulphur content of the company's pyrite, thus supplying Australia with an indi- genous supply of that commodity.

Notwithstanding the fall in wool and wheat prices Australia has been able to maintain a high level of internal prosperity. But as Mr. Sidney Marr Ward told the shareholders of the English Scottish and Australian Bank on Wednesday, the outlook is not altogether satisfactory.- Higher taxation has to be faced and the business turnover for the current year is likely to be lower than in the last few years. The present low price of wheat and the effects of dry seasons will be severely felt. On the other hand he pointed out that the price of wool, although low, had recently shown some improvement, metals were, now steady and increased armament expenditure should counteract shrinkage in other directions.

Baku Consolidated Oilfields is one of those undertakings whose oil wells were expropriated in consequence of the Rus- sian Revolution and the chief efforts of the board have since been directed towards trying to get compensation. Mr. R. R. Tweed, the chairman, reported at the meeting last Friday that he had not by any means abandoned hope of an eventual settle- ment. His present line of approach to the problem, he hinted, is to try and arrange for a pairing off between the creditors and the debtors of Russia. He estimated that there is no less than k4o,000,000, largely in the form of dormant bank balances, lying in this country to the credit of Russia and Russian institu- tions now under Soviet Government control.

Mr. W. S. Rose, who presided at the 'meting of Goode, Durrant and Murray in the absence of the chairman, Mr. W. E. Pennick, had to report that the company's recovery had under- gone a setback. As Australian merchants they have suffered from the fall in the prices of primary commodities, particularly wheat and wool, and as textile traders they have shared in the general misfortunes of the textile industries. But in one respect he had good news for the shareholders. C.T.C. Bazaars (S.A.), a South African store company, with which the company does considerable business, is expected ultimately to meet its