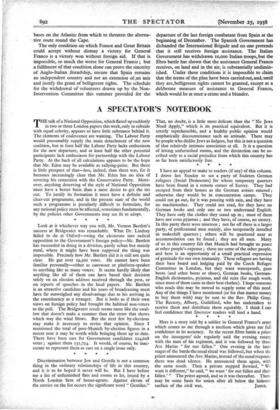 THE talk of a National Opposition, which flared up suddenly in two or three London papers this week, only to subside with equal celerity, appears to have little substance behind it. The elements of coalescence are wanting. The Labour Party would presumably supply the main detachment of the new coalition, but at least half the Labour Party lacks enthusiasm for the new departure, and at least half the other potential participants lack enthusiasm for partnership with the Labour Party. At the back of all calculations appears to be the hope that Mr. Eden may be available as rallying-point. But there is little prospect of that—less, indeed, than there was, for it becomes increasingly clear that Mr. Eden has no idea of severing his connexion with the Conservative Party. More- over, anything deserving of the style of National Opposition must have a better basis than a mere desire to get the ins out. To justify its formation it must have a definite and clear-cut programme, and in the present state of the world such a programme is peculiarly difficult to formulate, for any national policy must be affected, sometimes fundamentally, by the policies other Governments may see fit to adopt.

* * * * Look at it whichever way you will, Mr. Vernon Bartlett's success at Bridgwater was remarkable. What Dr. Lindsay failed to do at Oxford—swing the electorate into radical opposition to the Government's foreign policy—Mr. Bartlett has succeeded in doing in a division, partly urban but mainly rural, where it might have been supposed the thing was impossible. Precisely how Mr. Bartlett did it is still not quite clear. He got over 19,50o votes. He cannot have been familiar personally—either as canvasser or platform-speaker to anything like as many voters. It seems hardly likely that anything like all of them can have based their decision solely on an election address received through the post, or on reports of speeches in the local papers. Mr. Bartlett is an attractive candidate and his years of broadcasting must have far outweighed any disadvantage due to his arriving in the constituency as a stranger. But it looks as if their own views on foreign policy had brought the habitual non-voters to the poll. The Bridgwater result seems more like the swal- low that doesn't make a summer than the straw that shows which way the wind blows. But the next few by-elections may make it necessary to revise that opinion. Since I mentioned the total of post-Munich by-election figures in a recent note it may be worth while bringing them up to date. There have been cast for Government candidates 124,028 votes ; against them 131,724. It would, of course, be inac- curate to represent them as cast on a single issue only.

* * * * Discrimination between Jew and Gentile is not a common thing in the ordinary relationships of life in this country, and it is to be hoped it never will be. But I have before me a list of unfurnished flats and rooms to let, issued by a North London firm of house-agents. Against eleven of the entries on the list occurs the significant word " Gentiles." That, no doubt, is a little more delicate than the " No Jews Need Apply," which is its practical equivalent. But it is utterly reprehensible, and a healthy public opinion would emphatically discountenance such an attitude. There may be people who dislike Jews as lodgers, but this is not a question of that relatively intimate association at all. It is a question of letting unfurnished rooms, and the distinction can be as- cribed only to a racial prejudice from which this country has so far been satisfactorily free. * * * * I have an appeal to make to readers (if any) of this column. I drove last Sunday to see a party of. Sudeten German refugees (Social Democrats) for whom temporary quarters have been found in a remote corner of Surrey. They had escaped from their homes as the German armies entered ; otherwise they would be in concentration camps. They could not go out, for it was pouring with rain, and they have no mackintoshes. They could not read, for they have no German books and only one or two understand English. They have only the clothes they stand up in ; most of them have not even pyjamas ; and they have, of course, no money. In this party there were nineteen ; not far off there is a larger party, of professional men mainly, also temporarily installed in makeshift quarters ; others will be quartered near as accommodation can be found ; they are all men. Many of us in this country felt that Munich had brought us peace at other people's expense ; these are some of the other people, and here is an opportunity of a small practical expression of gratitude for our own immunity. These refugees are having their bare board and lodging paid by the Czech Refugee Committee in London, but they want waterproofs, gum boots (and other boots or shoes), German books, German- English dictionaries, pyjamas, and old suits (for rough work, since most of them came in their best clothes). I hope someone who reads this may be moved to supply some of this need. Any of the things I have mentioned (or for that matter money to buy them with) may be sent to the Rev. Philip Gray, The Rectory, Albury, Guildford, who has undertaken to receive them and distribute them equitably. I think I can feel confidence that Spectator readers will lend a hand. * * * * Here is a story told by a soldier in General Franco's army which comes to me through a medium which gives me full confidence in its accuracy. In the recent Ebro battle a priest on the insurgents' side regularly said the evening rosary with the men of his regiment, and it was followed by three Ave Marias " for our fallen." One evening in the later stages of the battle the usual ritual was followed, but when the priest announced the Ave Marias, instead of the usual response there was dead silence. He announced them again, with the same result. Then a private stepped forward, " We want it different," he said, " we want ' for our fallen and their fallen.' " The priest agreed, and so it was thereafter. There may be some basis for union after all below the hideous