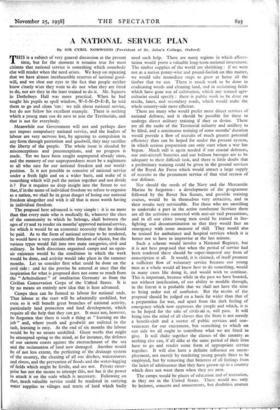 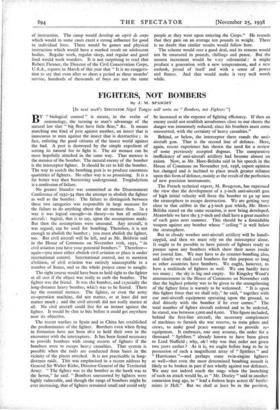 Meanwhile our Government will not and perhaps dare not impose compulsory national service, and the leaders of labour are very nervous lest, by agreeing to compulsion in any form through patriotism and goodwill, they may sacrifice the liberty of the people. The whole issue is clouded by misconceptions and preconceptions, and no progress is made. Yet we have been caught unprepared already once, and the memory of our unpreparedness must be a nightmare to all who care for our national freedom and our world- position. Is it not possible to conceive of national service under a fresh light and on a wider basis, and make of it something which will pull the nation together and not divide it ? For it requires no deep insight into the future to see that, if in the name of individual freedom we refine to organise as a nation, we shall be in great danger of losing our national freedom altogether and with it all that is most worth having in individual freedom.

The proposal here advanced is very simple : it is no more than that every male who is medically fit, whatever the class of the community to which he belongs, shall between the ages of 17-and 19 render six months' approved national service, for which it would be an economic necessity that he should be paid. As to the form of national service to be rendered, he would have a very considerable freedom of choice, but the various types would fall into two main categories, civil and military. In both directions organised camps and an open- air existence would be the conditions in which the work would be done, and activity would take place in the summer months. Let us consider first what could be done on the civil side: and let the proviso be entered at once that the inspiration for what is proposed does not come so much from the " Arbeitsdienst " of totalitarian Germany as from the Civilian Conservation Corps of the United States. It is by no means an entirely new idea- that is here advanced.

Camps then can be formed to labour for national ends. That labour at the start will be admittedly unskilled, but even so it will benefit great branches of national activity, particularly land protection and land development, which require all the help that they can get. It must not, however, be forgotten that there is such a thing as " learning on the job " and, where youth and goodwill are enlisted in the task, learning is easy. At the end of six months the labour would be by no means unskilled. Great works that might be attempted spring to the mind, as for instance, the defence of our eastern coasts against the encroachment of the sea and the reclamation of land now damaged. Another would be of not less extent, the perfecting of the drainage system of the country, the cleahing of all our ditches, watercourses and rivers, and the prevention of floods and the water-logging of fields which might be fertile, and are not. Private enter- prise has not the means to attempt this, nor has it the power to attack it on the scale which is necessary. Following on that, much valuable service could be rendered in carrying water supplies to villages and tracts of land which badly need such help. There are many regions in which affores- tation would prove a valuable long-term national investment. The timber supplies of the world are shrinking : if we were not as a nation penny-wise and pound-foolish on this matter, we would take immediate steps to grow at home all the timber that we can. There is much work to be done in eradicating weeds and cleaning land, and in reclaiming fields which have gone out of cultivation, which any trained agri- culturist could specify : there is public work to be done on tracks, lanes, and secondary roads, which would make the whole country-side more efficient.

There are many who would prefer more direct services of national defence, and it should be possible for these to undergo direct military training if they so desire. There are all the ranks of the Territorial infantry and artillery to be filled, and a continuous training of some months' duration would provide a flow of recruits of much greater potential efficiency than can be hoped for under the present system, in which serious preparation can only start when a war has begun. Much still is again needed if our coastal defences, our anti-aircraft batteries and our balloon barrages are to be adequate to their difficult task, and there is little doubt that a preliminary training could be given in the ground services of the Royal Air Force which would attract a large supply of recruits to the permanent service of that vital section of our defence.

Nor should the needs of the Navy and the Mercantile Marine be forgotten : a development of the programme followed by the Rover Sea Scouts, and possible training cruises, would be in themselves very attractive, and in their results very serviceable. For those who are unwilling to undertake a part in the active combatant Services there are all the activities connected with anti-air raid precautions, and in all our cities young men could be trained in fire- fighting and decontamination so that they would face an emergency with some measure of skill. They would also be trained for ambulance and hospital services which it is better not to have to improvise at the last minute.

Such a scheme would involve a National Register, but it is not here proposed that when the period of service had been rendered there should be super-imposed any form of conscription at all. It would, it is claimed, of itself promote a sufficient flow of voluntary service because our young men as a whole would all know how to do something, would in many cases like doing it, and would wish to continue. This is important, because while in the past we have boasted, not without justification, of our ability to muddle through, in the future it is probable that we shall not have the rime to bring order out of confusion. But the merits of the proposal should be judged on a basis far wider than that of a preparation for war, and apart from the dark feeling of emergency which now oppresses the people and which, it is to be hoped for the sake of civilhnti in, will pass. It will bring into the mind of all classes that the State is not merely a benefit-club and a source of public services and con- veniences for our enjoyment, but something to which on our side we all ought to contribute what we are fitted to give. It will shake together the classes of the country as nothing else can, if all alike at the same period of their lives have to go and render some form of appropriate service together. It will also have a definite influence on unem- ployment, not merely by rendering young people fitter to be employed, but by removing that bitterest of all feelings from 'the heart of adolescence that they have grown up in a country which does not want them when they are men.

The camps would be places of education and of recreation, as they are in the United States. There would not: only be lectures, concerts and amusements, but doubtless courses of instruction. The camp would develop an esprit de corps which would in some cases exert a strong influence for good in individual lives. There would be games and physical instruction which would have a marked result on adolescent bodies. Regular work, regular sleep, and, regular and good food would work wonders. It is not surprising to read that Robert Flexner, the Director of the Civil Conservation Corps, U.S.A., reports in March of this year that " It is no exaggera- tion to say that even after so short a period as three months' service, hundreds of thousands of boys are not the same people as they were upon entering the Corps." He records that they gain on an average ten pounds in weight. There is no doubt that similar results would follow here.

The scheme would cost a good deal, and its returns would not be measured in pounds, shillings and pence. But the unseen increment would be very substantial : it might produce a generation with a new temperament, and a new outlook, proud of itself and with a sense of power and fitness. And that would make it very well worth while.