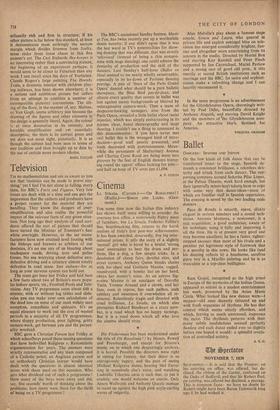 LA STRADA. (Curzon.) —OH ROSAL1NDA! (Rialto.)--SIMON AND LAURA. (Gau- mont.) FOR some time now the Italian film industry has shown itself more willing to consider the overseas box office, a notoriously flighty piece of furniture; but La Strada, Federico Fellini's fine, heartbreaking film, returns to the harsh realism of Italy's first post-war achievements. It has been awarded, deservedly, five big inter- national prizes. It tells the story of a slightly 'mental' girl who is hired by a brutal 'strong man' entertainer to beat the drum and per- form, like a dog, a few simple tricks. In a desolation of cheap fairs, derelict sites, and street corners, Anthony Quinn breaks chains with his chest and Guiliette Masina, ragged, round-eyed, with a bowler hat on her head, obeys her master's voice. As an actress Sig- norina Masina is an amalgam of Dorothy Tutin, Yvonne Arnaud and a clown, and her face, even in repose, has such pathos, such subtlety and sweetness it overwhelms all re- sistance. Relentlessly tragic and directed with cruel brilliance, La Strada, on which also pirouettes Richard Baseheart as a crazy acro- bat, is a road which has no happy turnings. But it is a road down which all who love the cinetna should stray.

Die Fledermaus has been modernised under the title of Oh Rosalitzda ! 1 by Messrs. Powell and Pressburger, and except for Strauss's music, on to which one despairingly anchors, it is horrid. Possibly the directors were right in opting for fantasy, but their decor is so outrageously sugary, and the pain of seeing Michael Redgrave dance, hearing Mel Ferrer sing in somebody else's voice, and watching Ludmilla Tcherina antic is such that, to put it crudely, one would welcome an emetic. Only Anton Walbrook and Anthony Quayle manage to stand up against the high pink coyly-curling waves of vulgarity. Alan Melville's play about a famous stage couple, Simon and Laura, who quarrel in private life and exploit conjugal bliss on tele- vision has emerged considerably brighter, fun- nier and altogether more entertaining from its sojourn in the studio. Directed, by Muriel Box and starring Kay Kendall and Peter Finch supported by Ian Carmichael, Muriel Pavlow and a strong cast of good old pros., it tilts merrily at sacred British institutions such as marriage and the BBC. Its satire and sophisti- cation make a refreshing change and I can heartily recommend it.

In the same programme is an advertisement for the Glyndebourne Opera, charmingly writ- ten by Paul Dehn, beautifully directed by Anthony Asquith, and starring David Knight and the members of 'the Glyndebourne com- pany. An attractive blurb, destined for America.