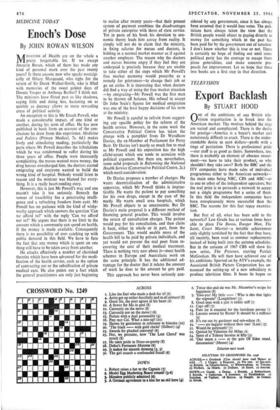 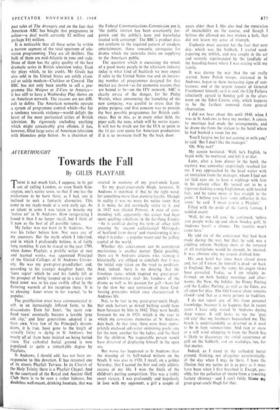 ONE of the ambitions of any British tele- vision organisation is to break into the American market. The motives behind the urge are varied and complicated. There is the desire for prestige-America is a buyer's market and notoriously difficult to crack. There is the under- standable desire to earn dollars-profit with a tinge of patriotism. There is professional pride -our stuff is as good as theirs. Somewhere, too, there is probably an element of obscure resent- ment-we have to take their product, so why shouldn't they take ours? Both the BBC and the ITV companies have made sales of individual programmes either to the American networks- the main ones being NBC, CBS and ABC-or to one or other of the independent operators; but the real prize is to persuade a network to accept not a single programme but a series of them. In this field the independent companies have been conspicuously more successful than the BBC. The reasons for this fact repay examina- tion.

But first of all, what has been sold to the networks? Lew Grade has at various times been able to place The Baron, Danger Man, The Saint, Court Martial-a notable achievement only slightly tarnished by the fact that they have, till recently, been used as summer replacements instead of being built into the autumn schedules. But in the autumn of 1967 CBS will show his new series, The Prisoner, starring Patrick McGoohan. He will then have achieved one of his ambitions. Spurred on by ATV's example, the Associated British Picture Corporation has an- nounced the setting-up of a new subsidiary to produce television films. It bases its hopes on

past sales of The Avengers and on the fact that American ABC has bought that programme in colour—a deal worth certainly $2 million and perhaps $44- million.

It is noticeable that all these series lie within a narrow segment of the total spectrum of tele- vision programming. They are all thrillers. The bulk of them are mid-Atlantic in tone and style. None of them has the spiky quality of the best dramatic series in British television today. Even the plays which, to his credit, Mr Grade has also sold in the United States are safely classi- cal or safely modern—Chekhov or Coward. The BBC has not only been unable to sell a pro- gramme like Maigret or Z-Cars to America— it has still to have a Wednesday Play shown on an American network. The reasons are not diffi- cult to define. The American networks operate a system of programme control which—but for a tendency towards violence—would delight the heart of the most puritanical critics of British television. By rigorously excluding anything which might conceivably give offence, it has, however, filled large areas of American television with blameless pulp fiction. As a chairman of

the Federal Communications Commission put it, 'the public interest has been covenicntly for- gotten and the public's taste and knowledge treated with contempt.' The BBC's product does not conform to the required pattern of anodyne entertainment, those romantic surrogates for drama which the networks insist on supplying to the American public.

The question which is exercising the minds of a good many people in the television industry today is what kind of backlash we may expect if sales to the United States rise and an increas- ing number of programmes designed for that market are shown—as for economic reasons they are bound to be—on the ITV network. ABC is clearly aware of the danger, for Sir Philip Warter, when announcing the launching of the new company, was careful to stress that the prime purpose and first concern was to provide the best possible programmes for British audi- ences. But in this, as in every other field, the piper calls the tune, which will be motto legato. It will not be much use for the ITA to point to the 14 per cent quota for American productions if it is to insinuate itself by the back door.