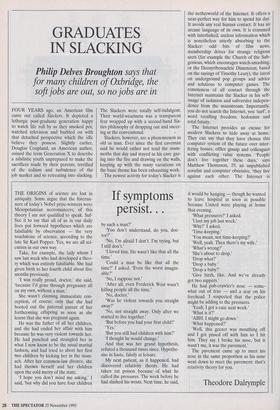 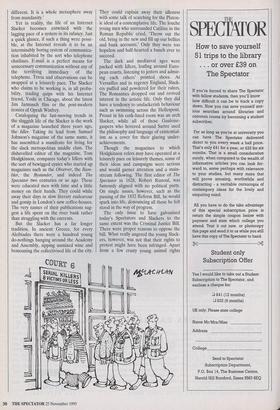 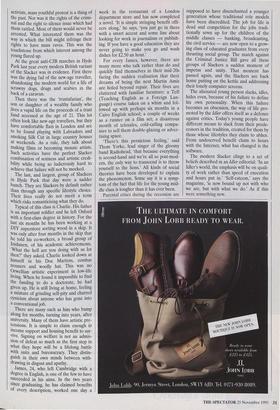 for many children of Oxbridge, the soft jobs are out, so no jobs are in

FOUR YEARS ago, an American film came out called Slackers. It depicted a lethargic post-graduate generation happy to watch life roll by as they smoked pot, watched television and burbled on with that detached perspective which the idle believe they possess. Slightly earlier, Douglas Coupland, an American author, coined the term Generation X to describe a nihilistic youth unprepared to make the sacrifices made by their parents, terrified of the tedium and turbulence of the job market and so retreating into slacking. The Slackers were totally self-indulgent. Their world-weariness was a transparent fear wrapped up with a second-hand Six- ties philosophy of dropping out and sneer- ing at the conventional.

Slackers, however, are a phenomenon as old as man. Ever since the first caveman said he would rather not tend the mam- moths that day and stayed in his cave gaz- ing into the fire and drawing on the walls, keeping up with the many variations on the basic theme has been exhausting work.

The newest activity for today's Slacker is the netherworld of the Internet. It offers a near-perfect way for him to spend his day. It avoids any real human contact. It has an arcane language of its own. It is crammed with interlinked, useless information which is nonetheless utterly absorbing to the Slacker: odd bits of film news, membership drives for strange religious sects (for example the Church of the Sub- genious, which encourages watch-smashing, or the Deoxyribonucleic Dimension, based on the sayings of Timothy Leary), the latest on underground pop groups and advice and solutions to computer games. The remoteness of all contact through the Internet maintains the Slacker in his self- image of isolation and subversive indepen- dence from the mainstream. Importantly, you do not search the Internet, you 'surf, a word recalling freedom, hedonism and total fatuity.

The Internet provides an excuse for modern Slackers to hide away at home. They can say that they have chosen this computer system of the future over inter- fering bosses, office gossip and colleagues with conflicting value systems. 'People don't live together these days,' says Matthew Thomason, 29, an unpublished novelist and computer obsessive, 'they live against each other. The Internet is different. It is a whole metasphere away from mundanity.'

Yet in reality, the life of an Internet Slacker becomes entwined with the lagging pace of a system in its infancy. Just a quick glance, if such a thing were possi- ble, at the Internet reveals it to be an interminably boring system of communica- tion inhabited by the sort who telephone chatlines. E-mail is a perfect means for unnecessary communication without any of the terrifying immediacy of the telephone. Trivia and observations can be swapped at a leisurely pace. The Slacker who claims to be working is, in all proba- bility, trading quips with his Internet friend, Yoshi in Chicago, about the latest Jim Jarmusch film or the post-modern ironies of Oprah Winfrey.

Cataloguing the fast-moving trends in the sluggish life of the Slacker is the work of a magazine launched three years ago, the Idler. Taking its lead from Samuel Johnson's magazine of the same name, it has assembled a manifesto for living for the slack metropolitan middle class. The dishevelled editor of the magazine, Tom Hodgkinson, compares today's Idlers with the sort of bewigged cynics who started up magazines such as the Observer, the Ram- bler, the Bystander, and indeed The Spectator two centuries or so ago. These were educated men with time and a little money on their hands. They could while away their days in slow literary endeavour and gossip in London's new coffee-houses. The very names of their publications sug- gest a life spent on the river bank rather than struggling with the currents.

But the Slacker has a far longer tradition. In ancient Greece, for every Alcibiades there were a hundred young do-nothings hanging around the Academy and Assembly, sipping unmixed wine and bemoaning the collectivised life of the city. They could explain away their idleness with some talk of searching for the Platon- ic ideal of a contemplative life. The louche young men who surrounded Catiline in the Roman Republic cried, 'Throw out the old, bring in the new and fill up our bellies and bank accounts.' Only they were too hopeless and half-hearted a bunch ever to succeed.

The dark and mediaeval ages were packed with Idlers, loafing around Euro- pean courts, listening to jesters and admir- ing each others' pointed shoes. At Versailles and in regency England, Slack- ers puffed and powdered for their rulers. The Romantics dropped out and revived interest in the artistic life. Only they did have a tendency to unslackerish behaviour such as swimming across the Hellespont. Proust in his cork-lined room was an arch Slacker, while all of those Gauloise- gaspers who hovered around Sartre used the philosophy and language of existential- ism as a cover for their glaring under- achievements.

Though the magazines to which Hodgkinson refers may have operated at a leisurely pace on leisurely themes, some of their ideas and campaigns were serious and would garner attention and a main- stream following. The first editor of The Spectator in 1828, Robert Rintoul, was famously aligned with no political party. On single issues, however, such as the passing of the 1832 Reform Bill, he would spark into life, denouncing all those he felt stood in the way of progress.

The only issue to have galvanised today's Spectators and Slackers to the same extent was the Criminal Justice Bill. There were proper reasons to oppose the bill. What really angered the young Slack- ers, however, was not that their rights to protest might have been infringed. Apart from a few crusty young animal rights activists, mass youthful protest is a thing of the past. Nor was it the rights of the crimi- nal and the right to silence issue which had them rattled. Most of them would never be arrested. What interested them was the way in which the bill might infringe their rights to have mass raves. This was the touchstone from which interest among the young flared up.

At the great anti-GIB marches in Hyde Park last year every modern British variant of the Slacker was in evidence. First there was the dying fad of the new-age traveller, abandoning the modern world for a life of scrawny dogs, drugs and scabies in the back of a caravan.

Then there was the Imstafarian', the son or daughter of a wealthy family who lives a vapid life on the proceeds of a trust fund accessed at the age of 21. This lot often look like new-age travellers, but they have comfortable flats in London and are to be found playing with Labradors and smoking Silk Cut in large country houses at weekends. As a rule, they talk about making films or becoming mosaic artists. Such activities have the perfect Slacker combination of sexiness and artistic credi- bility while being so ludicrously hard to achieve that failure will not be mocked.

The last, and largest, group of Slackers In Hyde Park that day were a sadder bunch. They are Slackers by default rather than through any specific lifestyle choice. Their lives really do not merit a term which risks romanticising what they do.

Typical of this class is Charlie. His father is an important soldier and he left Oxford with a first-class degree in history. For the last six months he has been working at a DIY superstore sorting wood in a skip. It was only after four months in the skip that he told his co-workers, a broad group of Irishmen, of his academic achievements. `What the hell are you doing with us lot then?' they asked. Charlie looked down at himself in his Doc Martens, combat trousers and woolly hat. This was no Orwellian artistic experiment in low-life living. When he found it impossible to find the funding to do a doctorate, he had given up. He is still living at home, feeling a mixture of grinding self-pity and charred cynicism about anyone who has gone into a conventional job. There are many such as him who bump along for months, turning into years, after university. Many of them have artistic pre- tensions. It is simple to claim enough in income support and housing benefit to sur- vive. Signing on welfare is not an admis- sion of defeat so much as the first step in what they hope will be a lifelong battle with suits and bureaucracy. They distin- guish in their own minds between with- drawing in disgust and apathy. James, 24, who left Cambridge with a degree in English, is one of the few to have succeeded in his aims. In the two years since graduating, he has claimed benefits of every description, worked one day a week in the restaurant of a London department store and has now completed a novel. 'It is simple stringing benefit offi- cers along,' he says, 'you just go in there with a smart accent and some line about looking for work in journalism or publish- ing. If you have a good education they are never going to make you go and wash dishes for £2.50 an hour.'

For every James, however, there arc many more who talk rather than do and quickly find themselves in their mid-20s facing the sudden realisation that their dreams of being the next Martin Amis are holed beyond repair. Their lives are cluttered with familiar furniture: a Tefl (Teaching English as a Foreign Lan- guage) course taken on a whim and fol- lowed up with perhaps six months in a Cairo English schbol; a couple of weeks as a runner on a film set; a disastrous month of telesales, cold-calling compa- nies to sell them double-glazing or adver- tising space. `There's this pernicious feeling,' said Thom Yorke, lead singer of the gloomy band Radiohead, 'that because everything is second-hand and we're all so post-mod- em, the only way to transcend is to throw yourself to the lions.' All kinds of social theories have been developed to explain the phenomenon. Some say it is a symp- tom of the fact that life for the young mid- dle class is tougher than it has ever been.

Parental crises during the recession are supposed to have disenchanted a younger generation whose traditional role models have been discredited. The job for life is dead and competition for the jobs tradi- tionally sewn up for the children of the middle classes — banking, broadcasting, the civil service — are now open to a grow- ing class of educated graduates from every thrusting social group. The march against the Criminal Justice Bill gave all these groups of Slackers a sudden moment of impetus and unity. That moment has passed again, and the Slackers are back home putting on the kettle and addressing their lonely computer screens.

The alienated young person slacks, idles, hides even, because of his failure to define his own personality. When this failure becomes an obsession, the way of life pro- moted by the Idler offers itself as a defence against critics. Today's young people have different means to slack from their prede- cessors in the tradition, created for them by those whose lifestyles they claim to abhor. From undeserved benefit claim to hours with the Internet, what has changed is the software.

The modem Slacker clings to a set of beliefs described in an Idler editorial: 'In an Idler's world, the emphasis will be on quali- ty of work rather than speed of execution and hours put in.' Self-esteem,' says the magazine, 'is now bound up not with who we are, but with what we do.' As if this were something new.