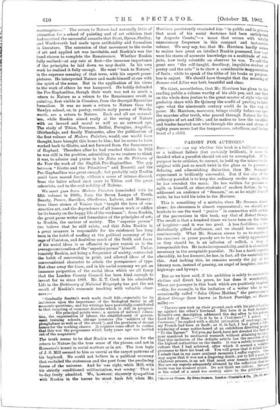 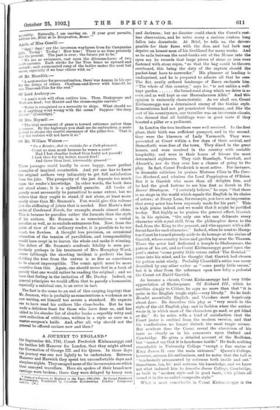 BEFtwak ,:ne can say whether this book is a brilliant sue.:,,s or a brilliant failure (but certainly brilliant), it must decided what a parodist should set out to accomplish. If L< purpose be to criticise, to correct, to hold up the mirror to Via- original with just so much twist in the glass as to present a defacing and admonishing distortion, then Mr. Seaman' experiment is brilliantly successful But if the aim of ti.' ordinary parodist is to keep, the ordinary reader merry, then he has overshot the mark.. He has written for persons agile as himself, as close students of modern fiction; be has addressed an audience of "Seamen," or, as he might him, •!f write, he has told his tales to the Marines.

This is something of a mistake, since Mr. Seaman stan,i, alone; his cleverness is almost supernatural ; we should not hesitate to use the word " genius " in connection with certain of the perversions in this book, say that of Robert Orasige. The result is that a hundred times we have been on the brink of laughter—and it was too good. A less fastidious, a I",• diabolically gifted craftsman, and we should have laughed continuously. What Mr. Seaman seems to us to require. if his exercises in prose parody are to be as widely appreciated as they should be, is an infusion of rollick, a drop of irresponsible fun. He lacks irresponsibil ity, and it is absolutely necessary in the acceptable parodist. He has a hawk's eye for absurdity, he has humour, he has, in fact, all the essentials but this. And lacking this, he remains merely the joy of tl:e literary man, instead of passing, an angel of laughter, into tile highways and byways. • But as we have said, if his ambition is solely to correct 1:'s victims and divert his peers, he has done it wonderfully. There are passages in this 'book which are positively inspired. —this, for example, in the imitation of a writer who is still occasionally called " John Oliver Hobbes," the perversion of Robert Orange (here known as Robert Porridge, ni Haute- " The two men took up their ground, each with his pistol leaniEg. up against the other's forehead. But' here it is best to folio your manhood to mediaeval research without attaining no. day after to his patron. Robert's own description addressed the Lord Isle of Rum :--`" Is it to be l'outrance f," I asked. i'outrance," he replied with a slight intonation of contempt, as my French had been at fault; as if, in feet; had given a fal;e rendering of some notice-board at an exhibition directing Peter" "To the Egress." Yet you, my Lord, have not devoted themet a that this inclusion of ,the definite article has the sanction of all the highest authorities on the"duello. It was a subtle triumph of culture that I had achieved, after which it seemed a relative grossness to blow his head off. You will guess that it killed On I admit that in my more sentient moments I suffer re#,:ret-s.he may argue that it was not a lingering death; yet tQ kill a malliA;• whatever process, is an act that must ever remain irretrieva • Nor are my regrets adequately silenced by the reflection that hi'. brain was his weakest point. Do not think me callous. sre4-'f is the relief of a mind too acutely alive to the pitifulness Borrewed Maws. By Orin Seaman. London : Cozurtable.a Co. DI!" *4.1 mortality. Naturally, I am moving on. If your gout permits, address me, Hdtel de is Resignation, Boma.'"

e Logo! Oggi ! cry the ice-cream wayfarers from far Campanian hills. To-day ! To-day ! How true ! There is no time precisely

past is over; the future yet to be."

like the present. The " We are as swimmers, cast upon the dilemma-horns of two ssrift currents. Each stroke for the True bears us upward and onward ; each surmounted rung of the ladder makes the next but easier, especially if we bear others with us."

Of Mr. Meredith:— "A next-weeker for procrastination, there wasAmens in his eye for the delays of others. Chatham-and-Dover with himself, he was Time-and-Tide for the rest."

"A man's work will often outlive him. Thus, Shakapeare and Watt are dead; but Hamlet and the steam-engine survive."

" Water is recognised as a necessity to ships. What should we do if anything went wrong with the ocean ? Suppose 'the deep did rot !' (Coleridge)."

"The vital movement of grass is toward reticence rather than a:Lammas. By the highways you shall see its embroidery, a mute pretest to shame the scarlet resonance of the pillar-box. That is hiy the vestries will not have it so."

On a Rooster, shot in. mistake for a Cock-pheasant. Count no man monk because he wears a cowl ! Had I but closelier looked thou hadst not passed! I took thee for thy better, tumid fowl!

And there thou liest, irrevocably grassed ! "

'These passages could hardly be more happy, more perfect examples of inspired counterfeit. And yet one has to know the original authors very intimately to get full satisfaction from the joke. The prosperity of the jest depends too much upon the reader's knowledge. In other words, the book does not stand alone ; it is a splendid parasite. All books of parody must necessarily be parasitical to some extent, but we believe that they ought to stand, if not alone, at least more nearly alone than Mr. Seaman's. Fun would give this volume just the stiffening of joints that is needed. Bret Harte's first series of Condensed Novels, for example, stands almost alone.

This is because he parodies rather the formula than the style of his authors. Mr. Seaman is so conscientious a verbal parodist as well, as to exclude extraneous fun. Now, from the point of view of the ordinary reader, it is possible to be too exact, too flawless. A thought less precision, an occasional relaxation of the tension of parallelism, and irresponsibility would have crept in to leaven the whole and make it winning.

The defect of Mr. Seaman's academic fidelity is seen par- ticularly perhaps in his treatment of Mrs. Humphry Ward, where (although the shooting incident is perfect) the line dividing the true from the untrue is so fine as sometimes to be almost imperceptible. The comic spirit must be more assertive than this. Again, one should never feel in a book of parody that one would rather be reading the original ; and we have that feeling in the imitation of Mr. Dooley. Indeed, on general principles we would affirm that to parody a humomist, especially a satirical one, is an error in tact.

The fact is (to come to an end of this carping inquiry) that Mr. Seaman, who is probably as conscientious a workman as is now writing, set himself too severe a standard. He expects one to have read his authors like class-books. But he has made a delicious feast for those who have done so, and has added to his slender list of slender books a superbly witty and alert collection of criticisms, written in a style as sure as a master-surgeon's knife. And, after all, why should not the general be offered caviare now and then ?