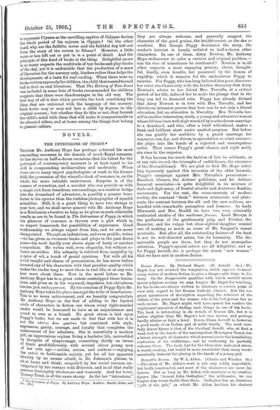 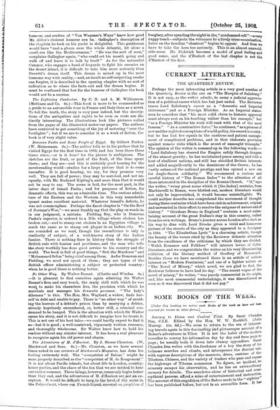 —The story of Mr. Alden's work is not only wildly improbable, but badly constructed, and most of the characters are mere lay figures. But as long as Mr. Alden will entertain us by creating figures like " honest John Gallegher," the millionaire, we can forgive him worse faults than these. Gallegher has an American " gift of the gab," on which Mr. Alden lavishes his choicest !humour, and readers of " Van Wagener's Ways" know, how good Mr. Alden's choicest humour can be. Galleghees description, of the chaplain he took on his yacht delightful. This gentleman would have "cast a gloom over the, whole Atlantic, let alone a small sea like the Mediterranean." "He was.the sort of man," -complains Gallagher again, "who could set his mouth going and walk off and leave it to talk by itself." As for the naturalist .Cumnor, who engages a band of leopards to fight his enemies on the desert island, it is difficult to take him more seriously than Drewitt's dream itself. This dream is mixed ,up in the most tiresome way with reality,—and, an insult no self-respecting reader can forgive, it is described in the opening, chapter with no sort of indication as to where the facts end and the dream begins. It must be confessed that but for the humour of Gallagher the book would not be a success.