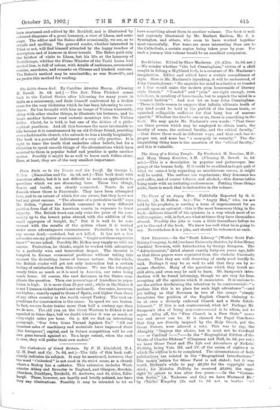 net.) —We wonder whether "the lad Cunningham," victim of a chill caught in fishing a Highland, loch, is a creature of Mr. Ifaclaren's imagination. Editor and edited have a certain resemblance of style. Here is Mr. Maclaren's (speaking, it will be understood, of John Cunningham) : " He unpacks his mind in a fashion so tousled as I fear would make the modern prim housemaids of literary style blench." "Tousled" and " prim" are right enough, even felicitous, in speaking of housemaids, but to unpack the mind in a "tousled fashion" ! And now let us hear John Cunningham. "There is little reason to suppose that infinite ultimate truth of any kind could be held in the pinfold of the human brain, or squashed collapsible sufficient for that bony box of mucous squelch." Whether the two be one or no, there is something in the book. We may quote Mr. 3laclaren's own words : "That there are three powers which may be employed to obtain truth, the faculty of sense, the rational faculty, and the ethical faculty," —that these three work in different ways, and that each has its proper use, and none has " a monopoly in veracity." The dis- tinguishing thing here is the assertion of the "ethical faculty," and this is valuable.