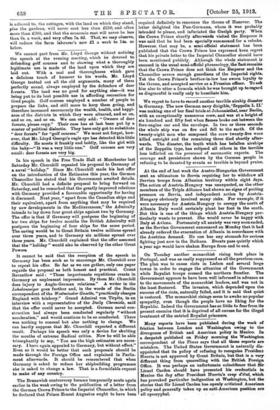 Page 2, 25 October 1913 — At the end of last week the Austro-Hungarian Government sent
Close

At the end of last week the Austro-Hungarian Government sent

an ultimatum to Servia requiring her to withdraw all Servian troops from Albanian territory within eight days. The action of Austria-Hungary was unexpected, as the other members of the Triple Alliance had shown no signs of putting pressure on Servia, and independent action by Austria- Hungary obviously involved many risks. For example, if it were necessary for Austria-Hungary to occupy the north of Albania Italy would certainly plant her foot in the south. But this is one of the things which Austria-Hungary par- ticularly wants to prevent. She would never be happy with Italy at Avlona. Fortunately all anxiety was very soon ended, as the Servian Government announced on Monday that it had already ordered the evacuation of Albania in accordance with the Austrian demand. No one has any stomach for serious fighting just now in the Balkans. Events pass quietly which a year ago would have shaken Europe from end to end.