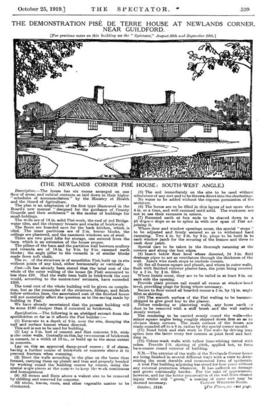 [For previous notes on this building see the " Spectator," August 30th and September 20011 Description.—The house has six rooms arranged on one floor of areas, and cubical contents as laid down in their higher " schedules of accommodation " by the Ministry of Health and the Board of Agriculture.

The plan is an adaptation of the first type illustrated in the Board's new manual " designed for the guidance of County Councils and their architects ' in the matter of buildings for small-holdings.

The walls are of 18 in. solid Pise-work, the roof of red Bridge. water tiles, and the chimney breasts and stacks of brickwork. The floors are boarded save for the back kitchen, which is tiled. The inner partitions are of 2 in. breeze blocks, the ceilings are plastered, and the casement windows are of steel.

There are two good lofts for storage, one entered from the barn, which is an extension of the house proper. The pillars of the barn and the partition wall between scullery and veranda are of 18 in. by 9 in. by 9 in. rammed earth blocks ; the angle pillar to the veranda is of similar blocks made from soft chalk.

The re. of the structure is of monolithic Pise, built up in situ without joints of any kind, either horizontally or vertically.

Cost.—It has already been stated that the total cost of the whole of the outer walling of the house (in Mfg) amounted to less than £20. Had the walls been built in brickwork the cost would, according to the contractors' estimate, have exceeded £200.

The total cost of the whole building will be given on completion, but as the remainder of the structure, fittings, and finish follow orthodox lines, the ascertained cost of the finished house will not materially affect the question as to the saving made by building in Pis& We have already _ascertained that the present building will be some £180 cheaper than if executed in brickwork.

Specification.—The following is an abridged extract from the specification so far as it affects the rise builder :

(1) Excavate to a depth of 9 in. over the site, dumping the turf and surface humus where directed. This soil is not to be used for building. (2) Lay a 6 in. bed of cement and flint concrete 3 ft. wide alder outer walls. Centrally on this, lay two courses of brickwork in cement, to a width of 18 in., or build up to the same extent in concrete.

Lay on this an approved damp-proof course ; if of slates, having a further course of brickwork or concrete above it to prevent fracture when ramming.

(3) Erect the walls according to the plan on the bases thus formed, carrying them up plumb and true and properly bonded by working round the building course by course, using the special angle-pieces at the corners to keep the work continuous and homogeneous (4) All stones and flints above a walnut size to be removed by riddling and reserved for concrete. All sticks, leaves, roots, and other vegetable matter to be eliminated. (5) The soil immediately on the site to be used without admixture of any sort and to be thrown direct into the shutterings. No water to be added without the express permission of the architect.

(6) The boxes are to be filled in thin layers of not more than 4 inat a time, and well rammed until solid. The workmen are not to use their rammers in unison.

(7) Rammed earth at box ends to be shaved down to a 45 degrees slope so as to splice in with new span of Pise adjoining it.

Where door and window openings occur, the special " stops " to be adjusted and firmly secured so as to withstand hard ramming. Two 4 in. by 2 in. by 9 in. plugs to be built in to each window jamb for the securing of the frames and three to each door jamb.

Special care to be taken in the thorough ramming at the corners and along the box edges.

(8) Insert below floor level where directed, 24 3 in. field drainage pipes to act as ventilators through the thickness of the wall. Insert wire mesh stops to exclude vermin. (9) Set all frames square and plumb, and where in outer walls, flush with finished exterior plaster-face, the joint being covered by a 2 in. by I in. fillet.

Where lintels occur, they are to be tailed in at least 9 in. on each side the opening. Provide plain picture rail round all rooms at window-head level, providing plugs for fixing where necessary. Secure to floor round all boarded rooms a 2 in. by 11 in. angle fillet as skirting.

(10) The smooth surface of the Pise walling to be hammerchipped to give good key to the plaster.

Before rendering or plastering walls, any loose earth or dust to be removed with a stiff brush and the wall surface evenly wetted.

The rendering to be carried evenly round the walls—the minor square angles being roughly chipped down first so as to obviate sharp corners. The main corners of the house are ready-rounded off to a 9 in. radius by the special corner mould.

(11) Bond brick and slab work to Pise walls by driving iron spikes into the latter every few courses at joint level and bedding in. (12) Colour-wash walls with tallow lime-whiting tinted with ochre. Provide 2 ft. skirting of pitch, applied hot, to form base-course round exterior of building.

N.B.—The exterior of the walls of the Nevelands Corner house are being finished in several different ways with a view to determining the most durable and economical form of epidermis. A trial Plait building adjoining has stood for four years without any external protection whatever. It has suffered no damage and grows continually harder. For the sake of appearances, however, and for the better preservation of the wall from chance injury whilst still " green," a coating of some sort may bt