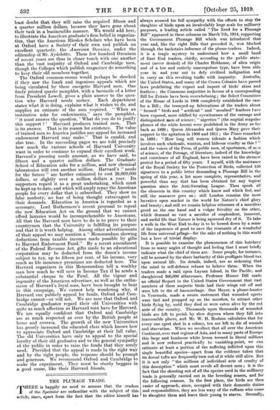 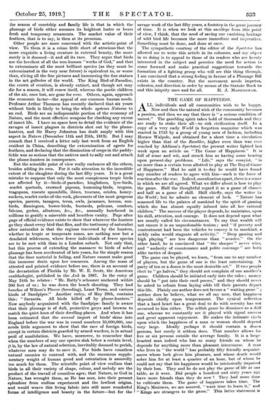 ?THERE is happily no need to assume that the readers of the Spectator are unfamiliar with the subject of this article, since, apart from the fact that the editor himself has

always avowed his full sympathy with the efforts to stop the slaughter of birds upon an incalculably huge scale for millinery purposes, a leading article called " The Need for a Plumage Bill" appeared in these columns on March 7th, 1914, supporting the Government Plumage Bill which was introduced that year and, like the eight Bills that preceded it, was blocked through the backstairs influence of the plume-traders. Indeed, it is a tragic mystery to understand how a small band of East End traders, chiefly, according to the public statement (never denied) of Sir Charles Hobhouse, of alien origin and of a low and entirely unscrupulous type, have been able year in and year out to defy civilized indignation and to carry on this revolting traffic with impunity. Australia, the United States, and many of the Crown Colonies have passed laws prohibiting the export and import of birds' skins and feathers ; the Commons majorities in favour of a corresponding Bill for Britain have been overwhelming ; the Select Committee of the House of Lords in 1908 completely established the case for a Bill ; the trumped-up fabrications of the traders about farmed " birds and " artificial " and "moulted" feathers have been exposed, more riddled by eyewitnesses of the carnage and distinguished men of science; " aigrettes " (the nuptial scapular plumes of the white heron) were prohibited in the Army as far back as 1899 ; Queen Alexandra and Queen Mary gave their support to the agitation in 1906 and 1911 ; the Times remarked in 1893: " How long will women tolerate a fashion which involves such wholesale, wanton, and hideous cruelty as this ? " and the voices of the Press, of public men, of sportsmen, of mas of science, of the Peerage, of literature, indeed of the knowledge and conscience of all England, have been raised in the sternest protest for a period of fifty years. I myself, with the assistance of the Royal Society for the Protection of Birds, collected 150 signatures to a public letter demanding a Plumage Bill in the spring of this year, a list more complete, representative, and powerful than any that has been obtained for any topical question since the Anti-Sweating League. Thus speak all the elements in this country which know and which feel, and still the massacre goes on ; still London remains the most lucrative open market in the world for Nature's chief glory and beauty ; and still we remain helpless witnesses of a merciless greed on the one hand and a vulgar frivolity on the other, which demand so vast a sacrifice of resplendent, innocent, and useful life that Nature is being squeezed dry of it. To take a walk in the West End to-day is to be bowed down by a sense of the impotence of good to save the remnants of a wonderful life from universal pillage—for the sake of nothing in this world but a love of trivial display.

It is possible to examine the phenomenon of this butchery from so many angles of thought and feeling that I must briefly indicate what the chief of them are. Some people, for instance, will be aroused by the sheer barbarity of this profligate blood-tax upon natural life. Its details, indeed, are so sickening that the mind in self-defence refuses to believe them. When the traders made a raid upon Laysan Island, in the Pacific, and slaughtered 300,000 albatrosses, Professor Homer Dill made an official Report to the United States Government that vast numbers of these majestic birds had their wings cut off and were left to die of haemorrhage. One Meyer, a plume-hunter in Venezuela, made a sworn statement that wounded egrets were tied and propped up on the marshes, to attract other birds flying by, until they died or were eaten alive by the red ants of the country. Thousands upon thousands of wounded birds are left to perish by slow degrees where they fall into inaccessible places, and Mr. W. H. Hudson calculates that for every one egret shot in a colony, ten are left to die of wounds and starvation. When we recollect that all over the American Continent, over vast regions of Asia, and in many parts of Europe this large and luminous white heron teemed in literal millions and is now reduced practically to vanishing-point, we can estimate at least a portion of the suffering inflicted upon this single beautiful species—apart from the evidence taken that its dorsal tufts are frequently torn out of it while still alive. But it is not only " the millions of individual acts of cruelty of this description " which must revolt all decent men ; it is the fact that the shooting out of all the species used in the millinery trade is generally carried out in the breeding season, and for the following reasons. In the first place, the birds are then easier of approach, since, occupied with their domestic duties and responsibilities, they are less wary of the ruffians who come to slaughter them and leave their young to ;starve. Secondly,

the season of courtship and family life is that in which the plumage of birds either assumes its brightest lustre or bears fresh and temporary ornaments. The market value of their feathers, that is to say, is then at its premium.

Other people are more concerned with the artistic point of view. To them it is a crime little short of atrocious that the more exquisite a living creature in external beauty, the more surely is it doomed—it and all its race. They argue that birds are the loveliest of all the non-human "works of God," and that to exterminate all the most brilliant species (as they must be exterminated in the very near future) is equivalent to, or worse than, slicing all the fine pictures and hammering the fine statues in the art galleries of the world. The King Bird-of-Paradise, the crown of creation, is already extinct, and though art may die for a season, it will renew itself, whereas the poetic children of the air, once lost, are gone for ever. Others, again, approach the economic factor—the appeal of our common human needs. Professor Arthur Thomson has recently declared that six years without birds is likely to bring the whole systema Naturae to an end. Birds are an indispensable portion of the economy of Nature, and the most effective weapons for checking any excess of insect life. I have no space here to detail the evidence of the ravages of insect plagues in districts shot out by the plumehunters, and Sir Harry Johnston has dealt amply with this aspect in Nature (December 11th and 25th, 1913). But I may remark that I received a letter only last week from an English resident in China, describing the extermination of egrets for feathers, and declaring that the diminution of crops in the paddyfields was so serious that the natives used to sally out and attack the plume-hunters in consequence.

But the scientific point of view really embraces all the others, besides adding its own. For it calls attention to the incredible extent of the slaughter during the last fifty years. It is a great mistake to suppose that only the most conspicuous tropic birds are affected by it—birds-of-paradise, kingfishers, lyre-birds, scarlet quetzals, crowned pigeons, humming-birds, trogons, tragopans, roseate spoonbills, ibises, toucans, orioles, honeysuckers, scarlet cocks-of-the-rock, pheasants of the most gorgeous species, parrots, tanagers, terns, owls, jacamars, herons, sunbirds, flamingoes, bower-birds, bustards, pelicans, condors, falcons, grebes, albatross, &c., &c., annually butchered in millions to gratify a miserable and heartless vanity. Page after page of official evidence exists to show that wherever the hunters go they shoot every bird that flies, and the testimony of naturalist after naturalist is that the regions traversed by the hunters, whether in tropic or temperate zones, are nothing now but a desolated wilderness, where fewer individuals of fewer species are to be met with than in a London suburb. Not only that, but this process of extending the massacre to birds of sober plumage has been accelerated of late years, for the simple reason that the finer material is failing, and Nature cannot make good this immense drain upon her resources. Among the mass of attested and printed evidence before me, there is an account of the devastation of Florida by Mr. W. E. Scott, the American ornithologist, published in the Auk in 1887. In the entry of May 24th he relates : " Mr. Batty's schooner anchored within 200 feet of us ; he was down the beach shooting. They had bunches of Wilson's Plover (breeding), Least Terns, and various kinds of Sandpiper." Another entry, of May 29th, contains this: "Sarasota. All birds killed off by plume-hunters." Now anybody acquainted with the Sandpiper/ family is aware that their plumage is of dull, protective greys and browns to match the quiet hues of their dwelling-places. And when it has been estimated that the annual import of birds' skins into England before the war was in round numbers 35,000,000, one needs little argument to show that the race of foreign birds, except in certain districts guarded by armed warders, is in actual peril of annihilation. We have, moreover, to remember that when the numbers of any one species sink below a certain level, it is, by the law of natural selection, inevitably doomed to perish, whatever men may do to save it. For birds have countless Natural enemies to contend with, and the enormous supplementary weight of human greed and ostentation is assuredly too much for them. The scientific point of view realizes that birds in all their variety of shape, colour, and melody are the product of the travail of countless ages; that Nature, or God in Nature, has wrought them, as He has men, into their present splendour from endless experiment and the lowliest origins, and would weave this living fabric into still more wonderful forms of intelligence and beauty in the future—but for the savage work of the last fifty years, a footstep in the great journey of time. It is when we look at this sacrilege from this. point of view, I think, that the need of saving our vanishing heritage of wild bird life becomes the more immediate and imperative. Something must be done, and done at once.

The sympathetic courtesy of the editor of the Spectator has allowed me to write this article in its columns, and my object in so doing is to appeal to those of its readers who are keenly interested in the subject and perceive the need for action to come forward and make practical suggestions towards the formation of a fighting group who will see this thing through. I am convinced that a strong feeling in favour of a Plumage Bill exists in the country. But the movement needs impetus. cohesion, and direction in order by means of the Statute Book to

end this iniquity once and for all. H. J. MassiNauam.