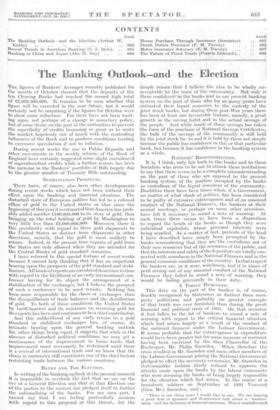 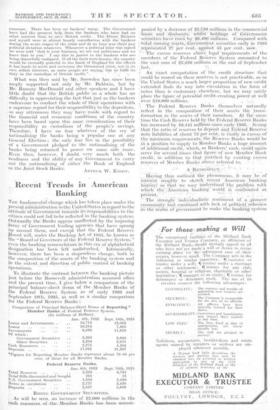 The Banking Outlook and the Election

TETE figures of Bankers' Averages recently published for the month of October showed that the deposits of the ten Clearing. Banks had reached the record high total of £2,028,500,000. It remains to be seen whether this figure will be exceeded in the near future, but it would certainly not be .surprising if the figures for October were to show some reduction. For there have not been want- ing signs, not perhaps of a change in monetary policy, but of some desire on the part of the authorities to prevent the superfluity of credits becoming so great as to make the market hopelessly, out of touch with the controlling influences of the Bank and to produce conditions tending to excessive speculatiOn if not to inflation.- During recent weeks the rise in Public Deposits and other movements in the weekly returns of the Bank of England have certainly suggested some slight curtailment of superabundant. credits while a further feature has been the increase in the. Bankers' portfolio of Bills largely due to the greater number of TreasUry Bills outstanding.

There have, of course, also been other developments during recent weeks which have not been without their effect upon the banking and financial situation. The disturbed state of European politics has led 'to a- colossal efflux .,of gold to the United States so that since the Ieginning of this year it is estimated that America has prob, ably added another £100,000,000 to its store of gold, thus bringing up, the. total holding of gold by Washington to very little less than g2,000,000,000. Moreover, there is this peculiarity with regard to these gold shipments to the United States as distinct from shipments in other directions, namely, that the gold is most unlikely to return. Indeed, at the present time exports of gold from the States .are only. allowed when they arc intended for the Central Banks of gold standard countries. I have referred to this special feature of recent weeks because I cannot help thinking that it has an important bearing upon the prospects of the gold standard and stabi- lisation. All kinds &reports are circulated from time to time With regard to the likelihood of an early international con- ference having for its object the arrangement of a stabilisation of the exchanges, but I believe the prospect of such a conference to be most remote. Nothing has been more responsible for the chaos of exchanges than the disequilibrium of trade balances and the distribution of gold. To both of those conditions the United States by tariff-barriers and its insistence on receiving gold for its exports has been and continues to be a chief contributor. And this unlikelihood of any early return to a gold standard or stabilised exchanges has, of course, its intimate bearing upon the general banking outlook for, other things being equal, it suggests that while in the absence of disturbed political conditions we may get a continuance of the improvement in home trade, that improvement' must necessarily be restrained until there is a revival of international trade and we know that the chaos in currencies still constitutes one of the chief factors 'restricting trade between the various countries.

BANKS AND THE ELECTION.

In writing of the banking outlook Egt the present moment it is impossible to overlook the fact that we arc on the eve of a General Election Wand that at that Election one 'of the parties to the contest has pledged itself to further the nationalising of the banks. For my own part, I cannot say that' I am feeling particularly anxious ;with regard to this proposal or this threat, • . for the simple reaseri" that I' be-Helm the idea to be wholly Un- seceptableto . the mass of the community'. Not only is there confidence" in the' banks and in our present banking system orithe part of those Who for so .many years have entrusted their liquid resources to the custody of the joint stock banks, but during these post-War years there has been nt least one favourable featuie, namely, a great growth in the saving habit and in the actual savings of the people. And while much of those savings has taken the form of the purchase of National Savings Certificates i the bulk of the savings of the community is still held by the joint stock banks and it is held by them not simply because the public has confidence in this or that particular 'bank, but because it has confidence in the banking system as a whole.

It is, I think, only fair both to the banks and to those Socialists who seem to be out to 'attack these institutions to say that there seems to be a complete misunderstanding on the part of ,those who are opposed to the present banking system, of the position occupied by the banks as custodians of the liquid resources of the community. Doubtless there have been times when, if a Government, no matter of what shade of politics, has been considered to be guilty of excessive extravagance and of an unsound conduct of the National Finances, the bankers at their annual meetings, or perhaps on some other occasions, have felt it necessary to sound a note of warning. At such times there seems to have been a disposition to regard the heads of the banks as though they were individual capitalists those personal interests were being assailed. As a matter of fact, protests of the -kind I have described have simply been prompted by the banks remembering that they arc custodians not of their own resources but of the resources of the public, and that the interests and safety of the depositors arc vitally con- nected with soundness in the National Finances and in the general economic conditions of the country. In that respect the bankers are, as it were, watchmen, and if in times of peril arising out of any unsound conduct of the National Finances they failed to sound a note of warning, they would be failing grievously in their duty.

This duty on the part of the banker is; of course, frankly recognised by Statesmen as distinct from mere party politicians and probably no greater example of that truth was ever furnished than during the great financial and political crisis. of 1931. On that occasion it had fallen to the lot of bankers to sound a note of warning with regard to the critical' financial situation which had arisen 'largely as a result of the 'conduct of the national finances under the Labour Government. It seems probable that the extravagance in 'expenditure would have been greater but for some measure of restraint having been exercised by the then Chancellor of the, Exchequer,- Mr. Philip Snowden. When therefore the crisis resulted in Mi. Snowden and someother members of the Labour Government joining the National Government pledged to effect the necessary economies, Mr. Snowden in statesmanlike fashion firmly refused. to approve the attacks made upon the banks by the labour extremists who 'were accusing the banks of being largely responsible for the situation which had arisen. In the course of a broadcast address on September of 1931 Viscount (then Mr.) Snowden, said

" There is one thing more I would like to say. We are hearing a good deal of ignorant and ill-informed talk about a ' bankers

tamp ' and the dictation .of. finaneial interests. _Tins is unadulterated nonsense. There has been no bankers' ramp. The Government have had the greatest - help„ from the bankers. who have had no

other interest than', to' save • British credit. The 'Primo MiniStcr . . .

. and myself were in almost hourly consultation with the bankers: during the acute stagesi-of the crisis and at no time .was there any political dictation whatever. Whenever a political issue Warirralited . we wore told that is your bUsiness, we are not politicians and wo leave that to you.' I say this iri justice to the bankers who are being shamefully. maligned. If all the facts wore known, the country would, be eternally grateful to the 13anls''of Engliend`for the efforts it has 'made toavert and overcome the thrOatened crisis, not in its own selfish interests, 'as Some, peOple are saying bUt to fulfil its duty as the custodian" 'of British credit."

What was then said by .Mr. Snowden has since been amply supported not only by Mr. Baldwin, but by Mr. Ramsay MacDonald and other speakers and I have little doubt that the British public as a whole has no difficulty in appreciating the fact that just as the bankers endeavOur to cOndlict the whole of their operationswith a supreme regard for their responsibility to the depositors, so any utterances they may have made. with regard to the financial and economic conditions of the country have been based upon this same consideration of their responsibility as custodians of the people's savings. Therefore, I have no fear whatever of the cry of nationalising the banks being a popular one at any • General Election ; the only fear lies in the possibility of a Government pledged to the nationalising of the banks being returned to power on some side issue. Even then, however, I doubt very much both the readiness and the ability, of any. Government to carry out the nationalising of either the Bank of England or the Joint Stock Banks, ARTHUR W. KIDDY.