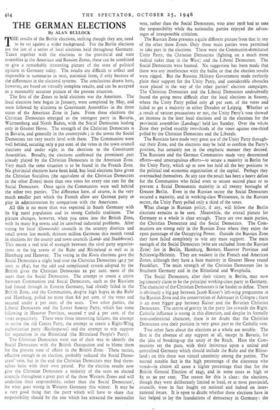 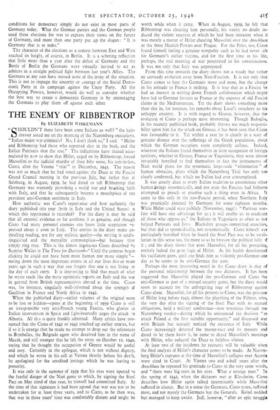 THE results of the Berlin elections, striking though they are, need to be set against a wider background. For the Berlin elections are the last of a series of local elections held throughout Germany. Taken together with the elections to the provincial and state assembles in the American and Russian Zones, these can be combined to give a remarkably interesting picture of the state of political opinion in Germany today. The results are difficult to collect and impossible to summarise in neat, statistical form, if only because of the differences in the electoral systems. The conclusions drawn here, however, are based on virtually complete results, and can be accepted as a reasonably accurate picture of the present situation.

All this is no more than was expected in South Germany with its big rural population and its strong Catholic traditions. The picture changes, however, when you cross into the British Zone, with its many big towns and its unsolved industrial problems. After voting for local (Gemeinde) councils in the country districts and small towns last month, thirteen million Germans this month voted in elections for the county and town councils (Land- and Stadtkreise). This meant a real trial of strength between the rival party organisa- tions in the big towns of the Ruhr and Rhineland as well as in Hamburg and Hanover. The voting in the Kreis elections gave the Social Democrats a slight lead over the Christian Democrats (40.5 per cent. to 38.9), but the odd and complicated system adopted by the British gives the Christian Democrats to per cent. more of the seats than the Social Democratg. The attempt to create a union between Communists and Social Democrats, such as the Russians had forced through in Eastern Germany, had already failed in the British Zone, and the Communists, despite high hopes in the Ruhr and Hamburg, polled no more than 8.6 per cent. of the votes and secured under 2 per cent. of the seats. Two other parties, the Liberal Democrats and the Lower Saxony Party, which has some following in Hanover Province, secured 7 and 4 per cent. of the votes respectively. There were three interesting failures, the attempt to revive the old Centre Party, the attempt to create a Right-Wing authoritarian party (Rechtspartet) and the attempt to win support for separatism in the Rhineland (the Rhineland People's Party).

The Russian Zone presents a quite different picture from that in any of the other three Zones. Only three main parties were permitted to take part in the elections. These were the Communist-dominated Unity Party, the Christian Democrats (fighting on a much more radical ticket than in the West) and the Liberal Democrats. The Social Democrats were banned. No suggestion has been made that there was any interference with the ballot or that the election results were rigged. But the Russian Military Government made perfectly plain their support for the Unity Party, and considerable obstacles were placed in the way of the other parties' election campaigns. The Christian Democrats and the Liberal Democrats undoubtedly found the going more difficult after the local elections in Saxony, where the Unity Party polled only 48 per cent, of the votes and failed to get a majority in either Dresden or Leipzig. Whether as a result of stricter precautions or not, the Unity Party's vote showed an increase in the later local elections and in the elections for the provincial assemblies (Landtage) held last Sunday. Over the whole Zone they polled roughly two-thirds of the votes against one-third polled by the Christian Democrats and the Liberals.

The Russians have made very great use of the Unity Party through- out their Zone, and the elections may be held to confirm the Party's position, but certainly not in the emphatic manner they desired. The Russians and the German Communists made very determined efforts—and unscrupulous efforts—to secure a majority in Berlin for the Unity Party, which up to now has held all the key positions in the political and economic organisation of the capital. Perhaps they overreached themselves. At any rate the result has been a heavy defeat for the Communists who failed even to secure second place or to prevent a Social Democratic majority in all twenty boroughs of Greater Berlin. Even in the Russian sector the Social Democrats secured a majority, and in working-class Weissensee, in the Russian sector, the Unity Party polled only a third of the votes.

What change in Russian policy, if any, will follow the Berlin elections remains to be seen. Meanwhile, the overall picture for Germany as a whole is clear enough. There are two main parties, the Christian Democrats and the Social Democrats. The Com- munists are strong only in the Russian Zone where they enjoy the open patronage of the Occupying Power. Outside the Russian Zone they have failed completely to win any mass support. The main strength of the Social Democrats (who are excluded from the Russian Zone) lies in Berlin, Hamburg, Bremen, Hanover Province and Schleswig-Holstein. They are weakest in the French and American Zones, although they have a bare majority in Greater Hesse round Frankfurt. The main strength of the Christian Democrats lies in Southern Germany and in the Rhineland and Westphalia.

The Social Democrats, after their victory in. Berlin, may now legitimately claim to be the principal working-class party in Germany. The character of the Christian Democrats is far harder to define. There is obviously a big gap between Jacob Kaiser's left-wing programme in the Russian Zone and the conservatism of Adenauer in Cologne ; there is an even bigger gap between Kaiser and the Bavarian Christian Democrats. The centre of gravity in the party lies towards the Right. Catholic influence is strong in this direction, and despite its formally non-confessional character, there is no doubt that the Christian Democrats owe their position in very great part to the Catholic vote.

Two other facts about the elections as a whole are notable. The first is the absence of any support at all, except in Bavaria, for the idea of breaking-up the unity of the Reich. Here the Com- munists set the pace, with their insistence upon a united and centralised Germany which should include the Ruhr and the Rhine- land ; on this there was virtual unanimity among the parties. The second notable fact is the high percentage of the electorate who voted—in almost all cases a higher percentage than that for the British General Election of 1945, and in some cases as high as 85 to 90 per cent. The reason for this is clear : the elections, though they were deliberately limited to local, or at most provincial, councils, were in fact fought on national and indeed on inter- national issues. It is open- to doubt whether these elections have in fact helped to lay the foundations of democracy in Germany: the conditions for democracy simply do not exist in most parts of Germany today. What the German parties and the German people used these elections for was to express their views on the future of Germany, and more than one party put up the slogan: " It is Germany that is at stake."

The character of the elections as a contest between East and West reached its height, of course,. in Berlin. It is a sobering reflection that little more than a year after the defeat of Germany and the Battle of Berlin the Germans were virtually 'invited to act as arbiters in a straight political fight between last year's Allies. The Germans at any rate have missed none of the irony of the situation. This is not to impugn the sincerity or courage of the Social Demo- cratic Party in its campaign against the Unity Party. All the Occupying Powers, however, would do well to consider whether the best wa) to create a democratic Germany is by encouraging the Germans to play them off against each other.