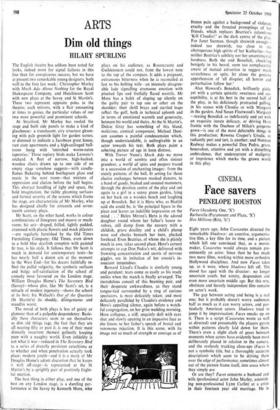 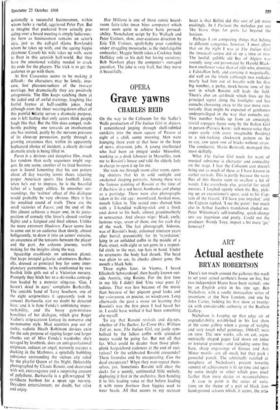 Faces (Academy One, 'X') Barbarella (Paramount and Plaza, 'X') Hot Millions (Ritz, V') Eight years ago, John Cassavetes directed the remarkable Shadows: an assertive, argumenta- tive film, a key film for its time, and a picture which left one convinced that, as a movie- maker, Cassavetes would always remain pre- eminently an actor. Since then he has made two more films, working within more orthodox Hollywood disciplines. And now Faces takes up, as it were, where Shadows left off. The mood has aged with the director: no longer uncertain youth, but wintry, despondent and even more uncertain middle age. But this wry, obstinate and fiercely independent film remains an actor's work.

The gap between acting and being is a real one; but it probably doesn't worry audiences half as much as it can worry actors, and par- ticularly American actors. Shadows tried to jump it by improvisation; Faces sneaks up on it. There is a script (Cassavetes wrote as well as directed) and presumably the players gyrate within patterns clearly laid down for them. There's even a slight clash of gears between moments when actors have evidently been most deliberately placed in relation to the camera, and the restlessly tracking close-ups (Faces is not a symbolic title, but a thoroughly accurate description) which seem to be driving them over the edge of performance, sometimes almost out of the picture frame itself, into areas where they simply are.

Or are they? Faces concerns a husband and wife (professional actor John Marley, astonish- ing non-professional Lynn Carlin) at a crisis in their fourteen year old marriage. He is

notionally a successful businessman, within whom lurks a rueful, aggrieved Peter Pan. But to imagine that puckered brow actually pre- siding over a board meeting is simply ludicrous: the hero as businessman remains an actor's idea, just as the call-girl (Gena Rowlands) whom he takes up with, and the ageing hippie (Seymour Cassel) his wife takes up with, seem to float in this actorish half-world. But they have the emotional validity needed to crack the code for the players. The trick is to get the audience to go with them.

At first Cassavetes seems to be making it difficult: the characters may be lonely, inse- cure, lost pleasure-seekers of the two-car marriage, but dramatically they are positively antagonistic. The film keeps catching them at the jaded end of awful evenings, laughing like fretful hyenas at half-audible jokes. And although even the sheer wearing-down effect of this painful talarity serves a dramatic purpose, one is left feeling that only actors think people laugh like that. But the film does compel, stub- bornly pushing one towards an involvement one has resisted, partly by the nervous pressure of its close-up persuasion, partly through a growing awareness that, within its apparently haphazard choice of incident, a clearly devised dramatic circle is being filled in.

Faces is a devious and deceptive film, much less random than early sequences might sug- gest. In one scene, another of its tired business- men is found lamenting that his son potters about all day wearing tennis shoes, rejecting proper American sports like football; later, when he's out to impress, he is the boastful father of a happy athlete. In smoother sur- roundings, the 'written' effect of this dialogue would probably be very obvious. Here it has the unedited sound of truth. These are the small victories of Faces; and the end of the film almost achieves a major one, in its juxta- position of comedy (the lover's absurd rooftop flight) and a fatigued and final silence. Unlike the more extrovert Shadows, Faces seems less to come out to an audience than slowly, almost belligerently, to draw it into an actors' exercise, an awareness of the tensions between the player and the part. An arduous journey, worth making for the insights along the way.

Spaceship crashlands on unknown planet. Out leaps intrepid galactic adventuress Barbar- ella, dressed as principal boy for some inter- planetary pantomime, to be confronted by two basilisk little girls out of a Victorian nursery. Promptly they hitch her to a ski-troika contrap- tion hauled by a monster sting-ray. 'Gee, I haven't skied in ages,' complains Barbarella. The amiable hand of Terry Southern, one of the eight scriptwriters it apparently took to concoct Barbarella, can no doubt be detected here; and it is Jane Fonda's unblinking imper- turbability, and the bossy gym-mistress banalities of her dialogue, which give Roger Vadim's strip-cartoon fantasy its nonsense and no-nonsense style. Mad scientists pop out of rocks; sadistic Heath Robinson devices exist for the sole purpose of ripping larger and larger chunks out of Miss Fonda's wardrobe; she's savaged by lovebirds, does an anti-gravitational striptease, seduces an angel, narrowly escapes a ducking in the Mathmos, a spitefully bubbling substance surrounding the vicious city ruled by the playful Queen of the Night. Delectably photographed by Claude Renoir, and decorated with wit, extravagance and a surprising amount of polythene, Barbarella is a gift-wrapped 'X' certificate bonbon for a space age nursery. Decadent entertainment, no doubt, but relax and enjoy. Hot Millions is one of those comic board- room fairy-tales (man bites computer) which never seem quite to achieve basic persuad- ability. Nonchalant script by Ira Wallach and Peter Ustinov, slow, over-cautious direction by Eric Till. Ustinov, spoilt-baby pout vanishing under straggling moustache, is the indefatigable embezzler; Maggie Smith takes a Cockney Judy Holliday role as his daft but loving secretary; Bob Newhart plays the computer's outraged guardian. The joke is very frail, but they nurse it beautifully.