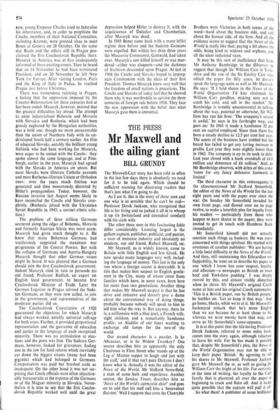 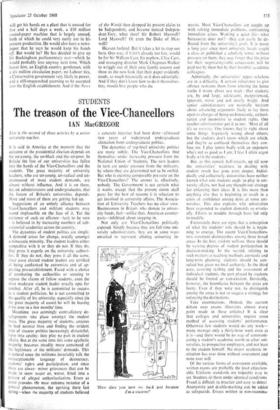 Mr Maxwell and the ailing giant

The Maxwell-Carr story has been told so often in the last few days there is absolutely no need for it to be told again. Which should be sufficient warning for discerning readers that that's just what I'm going to do.

As I see it, this is the story of three men and one who is so sensible that he can't be real— Professor Derek Jackson, who recognised that life is for living and so jacked it all in to whoop it up (in Switzerland and connubial comfort) with his sixth wife.

The other three men in this fascinating fable differ considerably. Looming largest is the gallant captain, publisher, publicist, and patriot, a man of immense industry and absolutely no modesty, our old friend, Robert Maxwell, mc.

Mr Maxwell, as is widely known, came to Britain with little English and less Greek. He now speaks many languages very well, includ- ing the language of money. This last is the only one where a foreign accent is detectable. It is this that makes him suspect to English gentle- men in the City, many of whom come from families which have, in some cases, been here for more than two generations. Another thing that makes Mr Maxwell suspect is that he has drive and initiative and doesn't give a damn about the conventional way of doing things, probably because nobody will speak to him to tell him what the way is. But anyway, there he is, a millionaire with a blue jowl, a French wife, eight children, and a remarkably handsome profile; an Aladdin of our times wanting to exchange old lamps for the new of the world.

Our second character is a puzzler. Is he Abanazar, or is he Widow Twankey? One source describes him as apparently the only Chairman in Fleet Street who 'stands up aUthe Leg o' Mutton supper to laugh and jest with the staff,' and if that isn't pure Dickens I don't know what is. Actually it was the editor of the News of the World, Mr Stafford Somerfield, a man of some bulk and experience. Another source, the Sunday Times, describes him as 'News of the World's autocratic chief' and goes on to add -that his staff call him a 'benevolent dictator.' Well I suppose that even the Cheeryble Brothers were Victorian in both senses of the word—hard about the business side, and soft about the human side, of the firm. And all the evidence seems to suggest that the News of the World is really like that; paying a bit above the odds, being kind to widows and orphans, and all the nicer industrial vices.

suggest that though Sir William Carr is York- shire and the son of the Sir Emsley Carr who edited the paper for fifty years, he doesn't speak the language quite as well as Mr Maxwell. He says: 'If I held shares in the News of the World Organisation I'd kiss chairman Sir William Carr goodbye, making sure not to catch his cold, and sell in the market.' Mr Bambridge is notably unsentimental in talking about the way, paternal or otherwise, Sir Wil- liam has run his firm: 'The company's record is awful,' he says in his forthright way, and goes on: 'In 1961 it made a handsome 32 per cent on capital employed. Since then there has been a steady decline to 12.5 per cent last year. The assets of the business have trebled but the board has failed to get any lasting increase in profits. Last year they were slightly lower than in 1962. The company is up to its neck in debt. Last year closed with a bank overdraft of £4.5 million and debenture of £6 million.' And, as Mr Bambridge observes, with debts of this order 'room for any fancy defensive footwork is limited.'

The third character in this extravaganza is the aforementioned Mr Stafford Somerfield, the editor of the News of the World for the last eight years and with the paper ever since the war. On Sunday Mr Somerfield invaded his own front page, and flowed over on to page twelve, to make a heartfelt plea for loyalty from his readers — particularly from those who happen to have shares in the paper; they were invited to get in touch with Hambros Bank immediately.

Mr Somerfield himself did not actually mention such things as bankers. He was more concerned with things spiritual. He started with overtones of another publisher: 'We are having a little local difficulty at the News of the World.' And then, still maintaining this Edwardian un- flappability, he went on to describe his paper as one 'which 1 know has your respect, loyalty, and affection—a newspaper as British as roast beef and Yorkshire pudding.' I was deeply moved by this, and almost visibly disturbed when he threw Mr Maxwell's original Czech name at him and his original Czech nationality. 'This is a British paper, run by British people,' he burbles on. 'Let us keep it that way.' And go home, blacks, while we're at it. Mr Maxwell's hackneyed remark that he's more English than we are because he at least chose to be, whereas we were merely born that way, can serve as Mr Somerfield's come-uppance.

It is at this point that the life-loving Professor Derek Jackson, referred to some miles back, comes into the story again, although reluctant to leave his wife. For he has made it possible that, despite Mr Somerfield's plea, the News of the World Organisation may not be able to keep their paper 'British.' By agreeing to sell his shares to Mr Maxwell, Professor Jackson gave Mr Maxwell the in, as well as giving-5f William Carr the fright of his life. For certainly at the time of writing, the loyalty to the Carr family that is plastered all over the paper Is beginning to crack and flake off. And it looks quite possible that the captain will pull it off.

So what then? A publisher of some brilliance will get his hands on a plant that is unused for five and a half days a week, a flO million coated-paper machine that is largely unused, both of which he could very easily use in his present production. He would also have a news- paper that he says he would keep his hands off. But would he? He has decided to give up his Buckingham parliamentary seat—which he would probably lose anyway next time. Which leaves him, an English country gentleman, with a six million circulation paper, no Labour ties, a Conservative government very likely in power, and a still-unquenched yearning to be accepted into the English establishment. And if the News of the World then dropped its present claim to be Independent, and became instead Indepen- dent-Tory, what then? Sir Robert Maxwell? Lord Maxwell? Or even the Duke of Max- well?

Heaven forfend. But it takes a lot to stop our hero. One way, if it isn't already too late, would be for Sir William Carr, his nephew, Clive Carr, and managing director Mark Chapman-Walker to wriggle out of their cosy family cocoon and show us the new look that their paper evidently needs, as much financially as it does editorially. And if they don't know how to do it themselves, they should hire people who do.