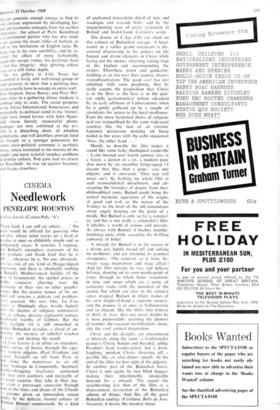 hank God, I am still an atheist . .' No rims would be offered for guessing who • id that, whose mind works on a level of aradox at once so childishly simple and so mbieuously exact. It remains. I suppose. tlis Bufiuel's exemplary statement of his wn position; and thank God that he is II whatever he is. No one, obviously.

uns less risk of any kind of Muegeridgean version, and there is absolutely nothing &timers Mediterranean lucidity of the ists of Greeneland, the spoiled priests in abby raincoats chewing over the tperiority of their sins to other people's rungs. But the precise • nature of his un- lief still remains a delicate and probleth- tical question. His new film. La Vole act(;e. is blindingly clear, tersely logical; cus the niceties of religious controverSy ith an urbane, derisive eighteenth century tachment worthy of Gibbon. But the Im's daylight wit is still enmeshed in other Bauelian paradox. a cloud of un- wing: the mystery of unbelief touched . grace--and inviting the touch. La Vole Lactir is in effect an impudent, udite survey of heresy through the ages. wo modern pilgrims (Paul Frankeur and turent Terzieff) set off from Paris to od along the motorways to an old 'rifle: Santiago de Compostella. Sceptical. oulder-shrugging wayfarers, concerned ith their own comforts and incapable of much surprise, they take in their jog- 01 stride a picaresque excursion through rne.of the times.and places of the Church a tourney given an immaculate screen Id.ItY by the delicate, formal colours of nstion IvIatrae camerawork. by a kind of enchanted naturalistic detail of inns and roadsigns and wayside halts, and by the unquestioning ease of every transition in Buiniel and Jean-Claude Carri6-e's script.

The drums of L'Age (('Or are silent on this calmest of Buiiuelian voyages. A head- waiter in a rather grand restaurant is dis- covered discoursing to his juniors on the human and divine elements in Christ while laying out the menus, returning rotting fruit to the kitchen and recommending the oysters. Elsewhere, priest and gendarme. nodding at an inn over their cognac, discuss transubstantiation. The good cure has just admitted, with some perplexity, that he really accepts the proposition that 'Christ is in the Host as the hare is in the pate' (an oddly gastronomical notion advanced by an early offshoot of Lutheranism), when he is gently gathered up by a couple of attendants for return to the local madhouse. Even the more hysterical shows of religious zeal are tranquillised by the same wide-eyed courtesy--like the nun of an extreme Jansenist persuasion insisting on being nailed to her cross with the calm injunction 'Now, the other hand . .

Merely to describe the film makes it sound like some larky theological vaudeville —Latin intoned over fourth century rites in a forest, a demon in a DS. a modern pope shot down by an anarchist firing-squad ('1 dreamt that they shot a pope', says one pilgrim, and is answered. 'That you will never see'). By bathing the whole film in such transcendental detachment, and ab- stracting the formulas of dogma from their philosophical roots, Burniel could bring the central mysteries (questions of the origins of good and evil, or the nature of the Trinity) to the level of the old conundrum about angels dancing on the point of a needle. But Butluel is only so far a rational- ist, and this is not really a rationalist's film: it inhabits a world of visions and marvels. As always with Burma it loathes mumbo- jumboing piety while accepting the baffling authority of belief.

A miracle for Builuel is in the nature of a divine jest, lightly tossed off and solving no problems; and yet retaining its essential strangeness. (The contrast, as it were, be- tween stage mechanism and stage effect.) And his film sustains its rare and delicate balance, dancing on its own needle-point of irony, through its whole form: transitions in time and space which are a series of conjuring tricks with the potential of the screen, but which are also. in the strictest sense. magical. Burluel. in effect, makes of his own sleight-of-hand a superior sorcery: and the process is at once so hallucinating and so elegant, like the shifts into fantasy in Belle de Jour, that one never doubts he is most purposefully retaining the element of wonder, the essential mystification, along- side the cool, critical disquisition.

Christ and his disciples are encountered at intervals along the route: a traditionalist painter's Christ, benign and bearded, unlike Pasolini's hard worker-priest, but a brisk. laughing, petulant Christ. throwing off a parable like an after-dinner speech. At the end of the film, we lose sight of the pilgrims. In another part of the Builuelian forest. Christ is met again, by two blind beggars making their interminable, intolerable demand for a miracle. The sequel—the reverberating last shot of the film—is a dispassionate reassertion of the Burluelian scheme of things. And like all the great Bunuelian endings (Viridiana, Belle de Jour. .1Vararin), it leaves the mystery intact.