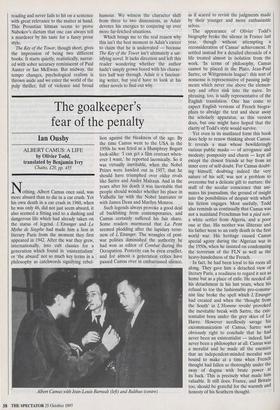 The goalkeeper's fear of the penalty

ALBERT CAMUS: A LIFE by Olivier Todd, translated by Benjamin Ivry Chatto, £20, pp. 435 Nothing, Albert Camus once said, was more absurd than to die in a car crash. Yet his own death in a car crash in 1960, when he was only 46, did not just seem absurd, it also seemed a fitting end to a dashing and dangerous life which had already taken on the status of legend. L'Etranger and Le Mythe de Sisyphe had made him a lion in literary Paris from the moment they first appeared in 1942. After the war they grew, internationally, into cult classics for a generation which found in 'existentialism' or 'the absurd' not so much key terms in a philosophy as catchwords signifying rebel- lion against the bleakness of the age. By the time Camus went to the USA in the 1950s he was feted as a Humphrey Bogart look-alike: 'I can get a film contract when- ever I want,' he reported laconically. So it was virtually inevitable, when the Nobel Prizes were handed out in 1957, that he should have triumphed over older rivals like Sartre and Andre Malraux. And in the years after his death it was inevitable that people should wonder whether his place in Valhalla lay with the Nobel laureates or with James Dean and Marilyn Monroe.

Such legends always provoke a good deal of backbiting from contemporaries, and Camus certainly suffered his fair share. Some readers murmured that La Peste seemed plodding after the lapidary terse- ness of L'Etranger. The wrangles of post- war politics diminished the authority he had won as editor of Combat during the Occupation. Posterity can be even crueller, and for almost a generation critics have passed Camus over in embarrassed silence, Albert Camus with Jean-Louis Barrault (left) and Balthus (centre as if scared to revisit the judgments made by their younger and more enthusiastic selves.

The appearance of Olivier Todd's biography broke the silence in France last year, though without attempting a reconsideration of Camus' achievement. It settled instead for a detailed chronicle of a life treated almost in isolation from the work. 'In terms of philosophy, Camus cannot be placed in the Plato, Jean-Paul Sartre, or Wittgenstein league': this sort of nonsense is representative of passing judg- ments which never rise above the elemen- tary and often sink into the naive. Its phrasing, too, is sadly representative of the English translation. One has come to expect English versions of French biogra- phies to abridge the text and shear away the scholarly apparatus, as this version does, but one might have hoped that the clarity of Todd's style would survive.

Yet even in its mutilated form this book does help to renew thinking about Camus. It reveals a man whose bewilderingly various public masks — of arrogance and modesty, pomposity and charm — kept all except the closest friends at bay from an inner core of self-doubt. For Camus doubt- ing himself, doubting indeed the very nature of his self, was not a problem to overcome but a delicate gift to nurture: the stuff of the secular conscience that ani- mates his journalism, the ground of insight into the possibilities of despair with which his fiction engages. Most usefully, Todd also reminds us continually that Camus was not a mainland Frenchman but a pied noir, a white settler from Algeria, and a poor one at that. His mother was illiterate and his father Went to an early death in the first world war. His heritage caused Camus special agony during the Algerian war in the 1950s, when he insisted on condemning the terrorism of the FLN as well as the heavy-handedness of the French.

In fact, he had been loyal to his roots all along. They gave him a detached view of literary Paris, a readiness to regard it not as home but as a place of exile. He needed all his detachment in his last years, when his refusal to toe the fashionable pro-commu- nist line broke the spell which L'Etranger had created and when the 'thought from the South' in L'Homme revoke provoked the inevitable break with Sartre, the exis- tentialist born under the grey sides of Le Havre. However needlessly savage his excommunication of Camus, Sartre was obviously right to conclude that he had never been an existentialist — indeed, had never been a philosopher at all. Camus was a moralist and he made all the enemies that an independent-minded moralist was bound to make at a time when French thought had fallen so thoroughly under the sway of dogma with brute power .at its back. This is precisely what made him valuable. It still does. France, and Britain too, should be grateful for the warmth and honesty of his Southern thought.