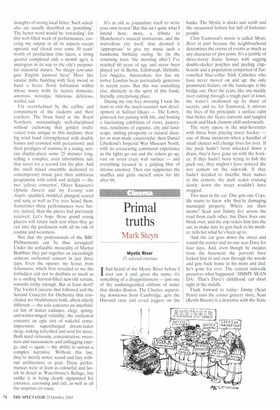 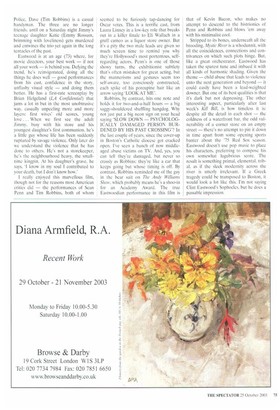 T had heard of the Mystic River before I I ever saw it and, given the name, it's something of a disappointment — just one of the undistinguished ribbons of water that divides Boston. The Charles, separating downtown from Cambridge, gets the Harvard crew and co-ed joggers on the

banks. The Mystic is docks and scrub and the occasional forlorn bar full of forlorner people.

Clint Eastwood's movie is called Mystic River in part because the neighbourhood determines the course of events as much as any character or plot point. It's a jumble of three-storey frame houses with sagging double-decker porches and peeling clapboards and a population comprised of flatvowelled blue-collar Irish Catholics who have never moved on and up: the only prominent feature on the landscape is the bridge out. Over the years, like any muddy river cutting through a rough part of town, the water's swallowed up its share of secrets, and so, for Eastwood, it mirrors the lives of his principals: a surface calm that belies the fierce currents and tangled weeds and black clammy chill underneath.

The story opens in the mid-Seventies with three boys playing street hockey — one of those moments when a handful of small choices will change lives for ever. If the puck hadn't been whacked down a drain, they'd have gone on with the hockey. If they hadn't been trying to fish the puck out, they mightn't have noticed the wet cement on the sidewalk. If they hadn't decided to inscribe their names in the cement, the dark sedan cruising slowly down the street wouldn't have stopped.

Two men in the car. One gets out. Cops. He wants to know why they're damaging municipal property. Where are their moms? Sean and Jimmy live across the road from each other, but Dave lives one block over, and the cop orders him into the car, to make sure he gets back to his mother, tells her what he's been up to.

And the car goes down the street and round the corner and no one sees Dave for four days. And, even though he escapes from the basement the perverts have locked him in and runs through the woods and gets back home to his mom and dad, he's gone for ever. The cement sidewalk preserves what happened: 'JIMMY SEAN DA'. That's Dave's childhood: cut short right in the middle.

Flash forward to today: Jimmy (Sean Penn) runs the corner grocery store, Sean (Kevin Bacon) is a detective with the State Police, Dave (Tim Robbins) is a casual handyman. The three are no longer friends, until on a Saturday night Jimmy's teenage daughter Katie (Emmy Rossum, brimming with loveliness) gets murdered and entwines the trio yet again in the long tentacles of the past.

Eastwood is at an age (73) where, for movie directors, your best work — if not all your work — is behind you. Defying the trend, he's reinvigorated, doing all the things he does well — good performances from his cast, confidence in the story, unflashy visual style — and doing them better. He has a first-rate screenplay by Brian Helgeland (LA Confidential) that jams a lot in but in the most unobtrusive way, casually unpeeling more and more layers: first wives' old scores, young love ... When we first see the adult Jimmy, busy with his store and his youngest daughter's first communion, he's a little guy whose life has been suddenly ruptured by savage violence. Only later do we understand the violence that he has done to others. He's not a storekeeper, he's the neighbourhood heavy, the smalltime kingpin. At his daughter's grave, he says, 'I know in my soul I contributed to your death, but I don't know how.'

I really enjoyed this marvellous film, though not for the reasons most American critics did — the performances of Sean Penn and Tim Robbins, both of whom seemed to be furiously tap-dancing for Oscar votes. This is a terrific cast, from Laura Linney in a low-key role that breaks out in a killer finale to Eli Wallach in a gruff cameo as a liquor store owner. But it's a pity the two male leads are given so much screen time to remind you why they're Hollywood's most portentous, selfregarding actors. Penn's is one of those showy turns, the exhibitionist subtlety that's often mistaken for great acting, but the mannerisms and gestures seem too self-aware, too consciously constructed, each spike of his porcupine hair like an arrow saying 'LOOK AT ME'.

Robbins, by contrast, hits one note and holds it for two-and-a-half hours — a big saggy-shouldered shuffling hangdog. Why not just put a big neon sign on your head saying 'SLOW DOWN — PSYCHOLOGICALLY DAMAGED PERSON BURDENED BY HIS PAST CROSSING'? In the last couple of years, since the cover-up in Boston's Catholic diocese got cracked open, I've seen a bunch of now middleaged abuse victims on TV. And, yes, you can tell they're damaged, but never so crassly as Robbins: they're like a car that keeps going but whose timing is off. By contrast, Robbins reminded me of the guy in the bear suit on The Andy Williams Show, which probably means he's a shoo-in for an Academy Award. The true Eastwoodian performance in this film is that of Kevin Bacon, who makes no attempt to descend to the histrionics of Penn and Robbins and blows 'em away with his minimalist cool.

Stripped to its bones, underneath all the brooding, Mystic River is a whodunnit, with all the coincidences, connections and contrivances on which such plots hinge. But, like a great orchestrator, Eastwood has taken the sparest tune and imbued it with all kinds of harmonic shading. Given the theme — child abuse that leads to violence unto the next generation and beyond — it could easily have been a lead-weighted downer, But one of its best qualities is that it's dark but not depressing. The other interesting aspect, particularly after last week's Kill Bill, is how timeless it is: despite all the detail in each shot — the coldness of a waterfront bar, the odd vulnerability of a corner store on an empty street — there's no attempt to pin it down in time apart from some opening sports banter about the '75 Red Sox season. Eastwood doesn't use pop music to place his characters, preferring to compose his own somewhat lugubrious score. The result is something primal, elemental, tribal, as if the sleek modernity across the river is utterly irrelevant. If a Greek tragedy could be transposed to Boston, it would look a lot like this. I'm not saying Clint Eastwood's Sophocles, but he does a passable impression.