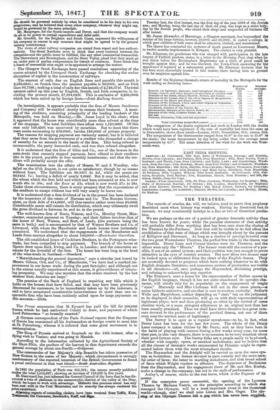 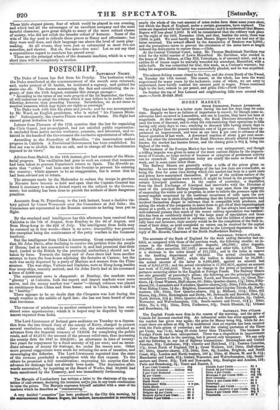 The records of oracles, &c. will, we believe, tend to prove that prophecy flourished most when history was weakest. Having no theatrical fact to recount, we may consistently indulge in a line or two of theatrical predio. tion.

We are perhaps on the eve of a period of greater dramatic activity than has been known for years; while the peculiar character of that activity will probably differ from anything that has been seen since the closing of the Theatres by the Puritans. Now first will be visible in its full effect the annihilation of that state of things which was brought about by the patents of Killigrew and Davenant. As long as a shadow of prestige hovered over the two great Westminster Theatres, the perfect free trade in the drama was impossible. Drury Lane and Covent Garden were the Theatres, and the others were only the " Minors." The former were still the centres of a pos- sible, if not of an actual system; and their position was just enough to prove attractive in the eyes of country cousins. But now these two houses may be looked upon as obliterated from the chart of the English drama. They, are avowedly devoted to purposes which have nothing whatever to do with English dramatic literature; and numerous centres of production are visible, in all directions—all, save perhaps the Haymarket, disdaining prestige, and refusing to acknowledge any superior. The Princess's, once a house for the representation of Italian operas in the English language, though it has not quite abandoned its operatic cha- racter, will chiefly rely for its popularity on the engagement of tragic,* " stars." Macready and Miss Cushman will act in the same pieces,—ff, union hitherto unknown, and one that is sure to awaken curiosity. Sadler's, Wells and Marylebone, neither depending on "stars" but on the judgment to be displayed in their ensemble, will go on with their representations-or legitimate plays; now and then producing an effect by the revival of some obsolete work, or a more stringent adherence to an original text than has been usually practised. Thus we shall have three theatres in a great mea- sure devoted to the performance of the poetical drama, not one of them even near the ancient seats of legitimacy.

The Surrey is to open as a regular operahouse—to be, in fact, what Drury Lane has been for the last few years. The whole of the Drury Lane company is taken thither by Mr. Bunn; and as they have been in the habit of playing with success during a few weeks every year, for soma time past, in this very theatre, there is no occasion to be very sceptical about, their good fortune now. The Surrey folks are a people easily to be pleased, whether with tragedy, opera, or nautical melodrama; and we believe that all the classes of dramatic works enumerated by Polonius might be repre- sented before them with the most triumphant results. The Haymarket and the Adelphi will be carried on upon the same sys- tem as heretofore; the former devoted to pure comedy and the more care- ful order of farce; the latter to startling melodmme, and that broad school of farce which Wright renders so effective. The departure of Buckstone. from the Haymarket, and the engagement there of Mr. and Mrs. Keeley, make a change in the company, but not in the style of performance. Astley's, of course, sticks to the real horse, which is the Pegasus of its poetry. If the enterprise prove successful, the opening of the Lyceum Theatre by Madame Veetris, on the principles according to which she managed the Olympic, will be a most important event in the theatrima world—though, alas! we shall miss Liston and Mrs. Orger. The do- sing of the Olympic Theatre. left a. geg.whiob, has, never been sapaired.,

Those little elegant pieces, four of which could be played in one evening, and which had all the advantages of an excellent company and the most tasteful character, gave great delight to many of the more refined classes of society, who did not relish the broader school of humour. Some of the wits of the day used to ridicule these pieces as flimsy and effeminate; but they were well done, and their language ran above the level of mere play- making. At all events, they were just as substantial as most five-act comedies, and shorter. But oh, five acts—five acts! Let us not say that a superstitious regard to numbers has passed away. These are the principal wheels of the dramatic machine, which in a very short time will be completely in motion.