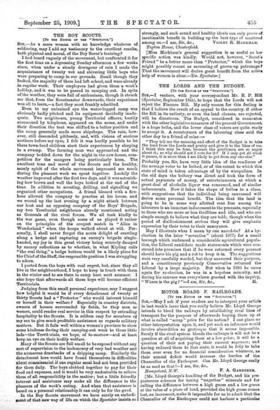 [To TEE EDITOR or TEl "SpEcrATori."] SIR,—As a mere woman with no knowledge whatever of soldiering, may I add my testimony to the excellent results, both physical and moral, of the Boy Scout's training ?

I had heard vaguely of the movement, but confronted it for the first time on a depressing Sunday afternoon a few weeks since, when under a steady downpour of rain I made the acquaintance of twenty wet and shivering little boys who were preparing to camp in our grounds. Small though they looked, the majority of them had left school, and were already in regular work. Their employers had given them a week's holiday, and it was to be passed in camping out. In spite of the weather, they were full of enthusiasm, though it struck me that, from the Scoutmaster downwards, their experience was all to learn,— a fact they most frankly admitted.

Even to my untrained eye the water-logged camp was

obviously badly pitched and its equipment decidedly inade- quate. Two neighbours, young Territorial officers, hastily summoned by telephone, appeared on the scene, and under their direction the tent was shifted to a better position and the camp generally made more shipshape. The rain, how- ever, still descended pitilessly, and, with visions of anxious mothers before my eyes, I felt it was hardly possible to let these town-bred children start their experiences by sleeping in a swamp. The farming man was approached and the company bedded down for the night in the cow-house, com- petition for the mangers being particularly keen. The excellent tone and moral of the Scouts and the healthy, manly spirit of the whole movement impressed me much during the pleasant week we spent together. Luckily the weather improved after the first two days, and it was astonish- ing how brown and well the boys looked at the end of the time. In addition to scouting, drilling, and signalling we organised other occupations. A friend blessed with a fire- hose allowed the company to practise at his house, and we wound up the last evening by a night attack between our host and an opposing company of the Boys' Brigade, my two Territorial neighbours already mentioned acting as Generals of the rival forces. We all took kindly to the war game, even though some of us played it rather on the principles of the croquet match in "Alice in Wonderland " when the hoops walked about at will. Per. sonally, I shall never forget the acute delight of crawling along a hedge and capturing an enemy's brigade single- handed, my joy in this great victory being scarcely damped By uneasy reflections as to whether, in what Kipling calls "the real thing," a hedge bottom would be a likely place for the Chief of the Staff, the responsible position I was struggling to adorn.

I parted from the boys with real regret, but, since they all live in the neighbourhood, I hope to keep in touch with them in the winter and to see them in camp here next summer. I also hope that afterwards all these boys will become efficient Territorials.

Judging from this small personal experience, may I suggest

how helpful it would be if every detachment of twenty or thirty Scouts had a " Protector " who would interest himself or herself in their welfare ? Especially in country districts, owners of houses surrounded by fields, be they men or women, could render real service in this respect by extending hospitality to the Scouts. It is seldom easy for members of my sex to give much profitable assistance as regards military matters. But it falls well within a woman's province to show some kindness during their camping-out week to these little lads—the Territorials, we hope, of to-morrow—and at least keep an eye on their bodily welfare.

sort of supervision to the inclemency of very bad weather and the numerous drawbacks of a dripping camp. Similarly the detachment here would have found themselves in difficulties about commissariat if one regular meal had not been provided for them daily. The boys clubbed together to pay for their food and expenses, and it would be very undesirable to relieve them of all responsibility in the matter; but a little friendly interest and assistance may make all the difference to the pleasure of the week's outing. And when that assistance is based on a personal relationship it can only be for the good.

In the Boy Scouts movement we have surely an embodi- went of that new way of life on which the Spectator insists so strongly, and such sound and healthy ideals can only prove of inestimable benefit in building up the best type of manhood among us.—I am, Sir, &c., VIOLET R. MARKHAM. Tapton House, Chesterfield.

[Miss Markham's general suggestion is as useful as her specific action was kindly. Would not, however, " Scout's Friend" be a better name than "Protector," which the boys might possibly resent as savouring of grown-up patronage ? That the movement will derive great benefit from the active help of women is clear.—En. Spectator.]