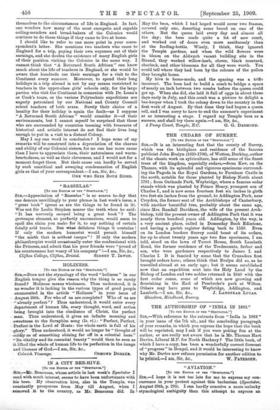 THE CEDARS OF SURREY.

[TO THE EDITOR OP THE "SPECTATOR."] Silt,—It is an interesting fact that the county of Surrey, which was the birthplace and residence of the famous publicist John Evelyn (1620-1706), of Wotton, Dorking, author of the classic work on sylviculture, has still some of the finest trees of the kingdom, especially cedars,—from Kew, on the Thames, with its splendid and vigorous specimens surround- ing the Pagoda in the Royal Gardens, to Farnham Castle in the south, notable for those planted by Bishop North about 1781; from Oatlands Park, Weybridge, where a famous cedar stands which was planted by Prince Henry, youngest son of Charles I., and is now some fourteen feet six inches in girth two feet six inches from the ground, to Addington Park, near Croydon, the former seat of the Archbishops of Canterbury, with another beautiful tree, probably about the same age, since Mrs. Randall Davidson, the wife of the present Arch- bishop, told the present owner of Addington Park that it was nearly three hundred years old. Addington, by the way, is a very ancient place, called in Domesday Book Edintone, and having a parish register dating back to 1559. Even on its London borders Surrey could boast of its cedars, for up to about twenty years ago two fine specimens, I am told, stood on the lawn of Turret House, South Lambeth Road, the former residence of the Tradescants, father and son, who were gardeners respectively to James I. and Charles I. It is fancied by some that the Crusaders first brought cedars here; others think that Evelyn did so, as he travelled abroad at an early age ; but it seems established now that an expedition sent into the Holy Land by the Bishop of London and two nobles returned in 1640 with the first cedar cones, some of which are now growing and flourishing in the Earl of Pembroke's park at Wilton. Others may have gone to Weybridge, Addington, and