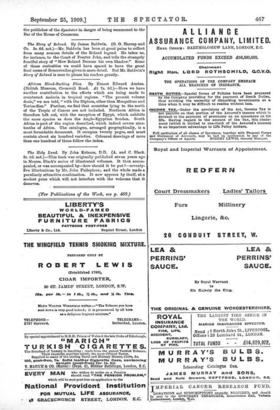 Road. ..£1 7s. 6d.)—Here we have another contribution to the efforts which are being made to counteract malaria in tropical regions. "The present volume deals," we are told, "with the Diptera, other than Mosquitoes and Tsetse-flies." Further, we find that countries lying to the north of the Tropic of Cancer are not included. Northern Africa is therefore left out, with the exception of Egypt, which exhibits the same species as does the Anglo-Egyptian Soudan. South Africa is part of the region described, which indeed covers nine- tenths of Africa. The catalogue, arranged geographically, is a most formidable document. It occupies twenty pages, and must contain about six hundred varieties. Coloured drawings of more than one hundred of these follow the index.