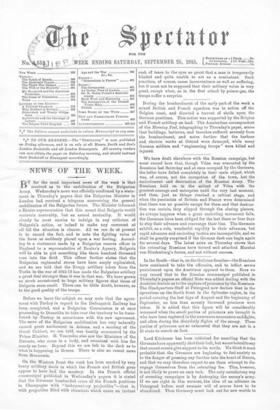 Page 1, 25 September 1915 — During the bombardment of the early part of the week
Close

During the bombardment of the early part of the week

a mixed British and French squadron was in action off the Belgian coast, and directed a torrent of shells upon the German positions. This action was supported by the Belgian and French artillery on land. The Amsterdam correspondent of the Morning Post, telegraphing to Thursday's paper, states that buildings, batteries, and trenches suffered severely from the bombardment, and notes further that the harbour and electric works at Ostend were damaged, while many German soldiers and " engineering troops " were killed and injured.